Win a snow boogie board from Wham-O

The Polar Bear Snow Boogie from Wham-O is a different kind of product for me to write about, but it’s one we couldn’t resist.

In the Autumn, ‘they’ predicted that we would have the coldest winter on record and that we’d have snow in October already. After last winter and the insane amounts of snowfall – all of which we missed by spending the winter in South Africa  – I was really excited. Eight winters I’ve endured the cold and dark and we’ve had a few great snow days, but never really enough to even build a proper snowman!

So, in preparation for this winter full of sledging, we agreed to test the Polar Bear Snow Boogie from Wham-O.  And we’ve had the grand sum-total of about half an hour’s gentle snow fall all Winter so far.  Dandy.

So I’m going to tell you about the snow boogie, and give the opportunity to win one, even though we’ve not had a chance to try it out yet. 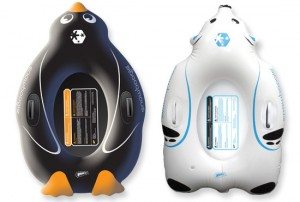 The Snow Boogie is made of PVC, and is meant for children aged 4 and over. It doesn’t have steering control, can’t be towed and can gather large speeds down big hills so in those circumstances I think it’s an age limit best stuck to.

That said, if your child is going to be sledging in your back yard, I can’t see any reason why a younger toddler can’t be pushed around the garden in it – assuming you can get down that low! (What great exercise!)

The polar bear, which we have, is really quite sweet. It has two sturdy handles for holding and is a rather cute design.

The guidance says it can take a person up to 54kg, but the actual seating area is quite small, so I’m not sure how comfortable someone towards the top end of that limit would be.

While intended for use with snow, this inflatable polar bear can also be used in water, although always with parental supervision, obviously.  I quite like that it doubles as a summer or winter activity though.

Environmentally speaking, it is a PVC product which isn’t great, but it is what it is.  A bonus of that, however, is that it is inflatable, so it is also deflatable, and fits in an A4 page-sized box for easy storage and transport.

I imagine this will be great fun should we actually get any of that promised snow, but if not I think we’ll have a ball with it in the pool in summer.

To win a Snow Boogie Air Tube from Wham-O, leave a comment below letting me know whether you prefer the polar bear or the penguin.

For an additional entry, sign up to receive our Competitions Only RSS feed or RSS for every post and leave a second comment below to say which one you’ve signed up for.

This competition finishes at 23:59 on 6 February 2012 and the winner will be randomly drawn using Random.

AND THE WINNER IS:

You do not have to tweet or share this competition to enter, but doing so helps ensure that I can keep bringing you competitions! You can subscribe to Diary of a First Child by RSS or email. You can also follow us on Facebook or on Twitter. We hope to see you back again soon!