Mama Jorje takes us through a range of different contraceptive options, the pros and cons of each and her experience of a few of them.

As you know, we’ve just had our second baby, and while pregnancy and childbirth have been possibly the two most incredible experiences in a pretty full and eventful life, Hyperemesis Gravidarum has dictated that I won’t be having any more babies. It’s just too strenuous on my body and my family.  Which means for the first time in four years I’m having to think of birth control again.

I was on the contraceptive pill until 2003 and had problems with complete lack of appetite for a number of years. I moved to the UK and went on a local tri-phasal contraceptive pill and gained three dress sizes in three months. As a result I have definite fears of going back onto a hormonal pill.

I’ve asked a few of my friends to share their experiences with birth control with us over the next few weeks, and today Jorje from Mama Jorje starts us off with an overview of the different types of birth control she’s used or researched.

I am not a medical professional. This post is based on my own research and experience. 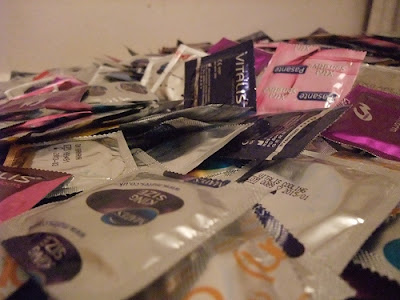 Condoms are probably the most common form of barrier birth control. They’re available in different materials, sizes, and textures! I have never met a man that would prefer this form of birth control if they had any option at all. I only dated one man that didn’t seem to mind using condoms and I married him.

Conceptrol is a vaginal contraceptive gel. It is a spermicide you insert before sex. For even greater pregnancy prevention, you can use this gel in conjunction with condoms. I’m certain most men would prefer this gel to condoms (no numbness), but some men are allergic to Nonoxynol-9 (the spermicide).

I’m going to tell you from personal experience, you have to insert the gel before sex. Inserting it after sex is lazy and not nearly as effective. Yes, I’m speaking from experience here!

This is, for me, what comes to mind when you hear “birth control.” I think of it as the most common form of birth control, although it doesn’t protect against any STDs. I was on hormonal birth control for a few years. There are an awful lot of side effects that can happen. You might gain weight, have headaches, acne, and mood swings. There are several versions on the market. The difference is in the specific hormones used and the amounts / balance of those hormones. There are pills on the market now that can limit your menses (period) to 4 times per year or less!

My general opinion after being on birth control pills, especially as a bit of a hippie, is that it is not nice to mess with Mother Nature. I understand some medical problems may need to be treated with hormones, but otherwise… I don’t think we should mess with hormones.

This would technically be called coitus interruptus. There is some debate over whether pre-ejaculate contains sperm and can result in pregnancy, but no studies have shown this to be the case. There have not been many studies, though. The usual problem is not pulling out in time.

In my early 20s, Depo-Provera was new on the market. My best friend and I decided to give it a “shot,” so to speak. This product is from Pfizer and is an injection. One shot provides hormonal birth control for 3 months. We both experienced the same results: absolute disinterest in sex. Neither of us wanted our husbands to touch us at all. So… it worked great as a contraceptive! No sex = no baby. Shoot, by that logic, it even protects against STDs! I sincerely doubt Depo-Provera gave all women the same issue. Since it is hormonal, I suspect you might experience the same side effects listed under hormonal pills above.

I never went back for any further shots, but my friend did. She thought maybe it was just an initial problem, but she continued to experience disinterest in sex for an additional three months after her second shot.

Years later I participated in a medical study for women with sexual dysfunction. There was some suspicion that some of my problem (not achieving orgasm) may have been a result of having used this product.

After having Sasha 2 years ago, we decided we were done having children. I researched Essure as a fairly new permanent birth control on the market. Here is the (very) basic rundown: The doctor goes in through your cervix and places 2 small pieces of metal that look very much like the springs out of ink pens into the openings of your fallopian tubes. Over a month or so, your fallopian tube grows to the metal, closing off the tubes with scar tissue. Then the doctor goes back in, using fluid and x-ray, to make sure your tubes are successfully completely closed.

This procedure is considered even less invasive than vasectomy. It seems a little invasive to me, but considering that they don’t have to cut you at all, I can see how it would be considered non-invasive.

I went for the preliminary appointment and had one problem with the process. They wanted to give me several drugs before the procedure. Normally I wouldn’t have a problem with the drugs they wanted to give me, but I was breastfeeding. The office assured me that the drugs were fine for nursing mothers, but I’m very selective and restrictive about drugs, especially when pregnant or nursing.

After deciding against Essure (until later, at least), I opted for an IUD.

There are two IUDs on the market. The first and most commonly used IUD is the Mirena, which is hormonal. An IUD is a small plastic “T” that sits in your cervix and provides time release hormones for 5 years. You can have it removed at any time and get pregnant just as quickly as you could if you were on any other hormonal birth control. Considering the hormone angle, I knew this was not the product for me.

During my research, I found a lot of women felt a lot of negative emotions while this IUD was in place. Some women were so desperate to be rid of it that they remove the IUD themselves at home.

The second IUD available is also a small plastic “T” that sits in your cervix. This one, however, is wrapped in copper and hormone-free. Because there are no hormones, you can start trying to conceive the same day it is removed. It can also last up to 10 years!

We later decided we wanted to try to conceive one more child, preferably a boy. After some online research (see Mirena above), we agreed I would attempt to remove this IUD myself at home. I’m sure any doctor would strongly advise against this! It took me about 5 seconds!

The idea with this form of birth control is that it is nature’s way of spacing babies. While lactating, you are presumably not menstruating. This is not, however, fool proof. Your ovulation cycle can return before your first menses. It is absolutely possible to conceive while breastfeeding.

I’ve practiced this one, but used it more in an effort to convince my ex-husband to try to conceive a son. The basis here is to monitor your cycle and your body to determine when, exactly, you ovulate. You can conceive several days before through several days after ovulation. I charted my menses and mucous on my cervix. You can find several programs, books and charts out there to help you track your data. Natural Family Planning is not just a form of preventing pregnancy, but also a system to use when trying to conceive. Controlling birth doesn’t necessarily mean preventing it, right?

This is a commonly known permanent form of birth control. Generally, the man is given some Valium to calm his nerves prior to the procedure. He is then given a topical numbing shot in the testicles. The doctor then makes a very small incision (or two) through which he finds the vas deferens (the tube that transports sperm). He then snips and removes a small section of the tube.

I was amazed when my husband volunteered to have this procedure, since he had previously been against it. There are lots of horror stories out there, but the procedure is really not that bad! Men just have a tendency to “talk it up.” He had to refrain from sex for about 5 days while he healed. You will also be advised to use a secondary form of birth control for 2-3 months until all sperm are cleared from your system. At that time, you’ll take a semen sample to a lab to be tested for sperm content. If you still have a normal amount of sperm, you may have to repeat the procedure.

Vasectomies are considered permanent, but they are reversible.

Tubal Ligation seems to be very common among women who are having a cesarean section. It is very convenient to have your “tubes tied” while the doctor already had you cut open. This form of permanent birth control is much more invasive than a vasectomy because they have to cut further into a woman. The doctor makes two incisions, then severs the fallopian tubes.

Tubal ligation is considered permanent, but it is reversible.

There are a few more hormonal and non-hormonal birth control methods available on the market. You can find out more through your personal doctor or Planned Parenthood.

Regardless of which form of birth control you choose, I sincerely recommend you research possible side effects. Even if you don’t think there are side effects with your chosen form, research it. There may be issues that hadn’t occurred to you.

Check back again over the next few weeks as other contributors share their experiences with some of these methods of contraception.

10 Uses For Lavender Around The Home
A Bad Day’s Mothering
My Body, My Choice With A Backup – A Look At IUD’s
The Danger And Ineffectiveness Of Antibacterial Laundry Detergents And A List of Eco-Friendly Non-Toxic Alternatives