Six months ago, my mother was diagnosed with Peritoneal Mesothelioma and told that without treatment she would have four weeks to live. Our visas were taking longer than that to be granted – my mother lives in Australia, I live in England, and the Australian government had no sympathy or compassion and made it as hard as was legally possible for us to get the visas for reasons I’ll never understand. My mother decided to have chemotherapy so that we’d make it to her, to say goodbye, and we arrived in Australia the day before her second round of chemotherapy, a treatment that nearly killed her. 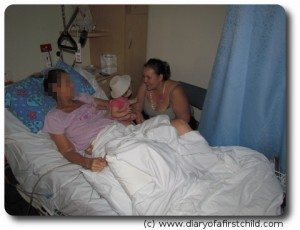 Between my mothers diagnosis and our leaving, I wasn’t very emotional about it.

That’s what I do. I go into ‘how can we solve this’ mode, and I need time to process what I’m feeling. People who know me well know that the things I’m talking about I’ve normally dealt with. It’s when I go quiet that I’m not really coping. When I don’t know what to say I haven’t processed it yet. Really, it’s when I go quiet on a topic that those closest to me know to start worrying about it.

So, between those two dates, I was given a copy of the Mother Magazine, which had the article A sacred transition: children and the death of a loved one by Starr Meneely, of Gentle Mothering. Her mother had recently succumbed to cancer, and she had flown half way across the world with her children to be by her side.

Her words wrenched at my heart, and my emotions broke. I sat in the corner of the room at our mother’s circle and sobbed. It was the release I needed, and it provided the gateway to being able to talk about it.

I guess, then, the first lesson I learned about talking to children about death – specifically a long, protracted, pending death, rather than an accidental or sudden passing, is having at least in part dealt with some of the emotions yourself.

If I had broken down that way in front of Ameli, I fear that she would have looked at death as something to fear, something painful. (Of course, it is these things, but it also isn’t, and I think the best thing under the circumstances is to introduce death as something not to be feared.)

These are vague concepts, mere words, to a child.

I told her Nana was going to die and we wouldn’t see her here on earth again. She said she didn’t want Nana to die. I said none of us want Nana to die, but we all die eventually, and it’s okay.

She tried to rationalise it in her mind.

“I have a good idea! Maybe we can go visit Nana when she’s died.”

“I’m afraid we can’t visit where Nana is going. We’ll miss her sometimes though, and that’s why Mama’s a little sad.”

“It’s okay. We can just look at photos of her. That will make us feel better.”

“Can I have some juice now?”

While she hasn’t been able to experience the finality of it, and doesn’t have the apprehension of the longing, it’s impossible to explain. 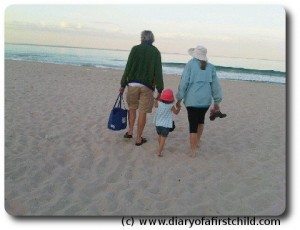 Simliar to our five stages of grief, Ameli seems to have traversed the stages too, but without the sense of fear or loss. She’s faced:

Something that has been helpful has been allowing her to ask questions, make {crazy} suggestions, and at times be almost hurtful in her throwaway comments – I wont miss Nana. I don’t mind if Nana dies. I don’t want to see Nana.

Separating her child behavior from my loss has been essential in gently explaining death to her. You can’t fear loss if you’ve never felt loss, so expecting an adult level of saying the right thing at the right time from a child only sets you up for pain.

I remember when my dad’s grandmother died. I didn’t really know her, and I didn’t have a relationship with her. I was really upset that I had to cancel my 13th birthday party. I saw it only in light of it’s impact on me, but having never known the loss of a loved one, I didn’t understand.

I asked a group of friends one day how you deal with this type of death, and how you explain it to a child. Most of them agreed that the children tend to accept death as another part of life. It’s just something that happens, and while they may have vague fond memories of the person, and might even ask for them, for the most part, life goes on. (Assuming it’s not a direct care giver, I think!)

Of course, in our situation, despite the terminal diagnosis my mother is still going strong, making the concept even harder to explain, but when we arrived in Australia, and the chemotherapy was eeking the life out of her faster than the cancer was, it was simply a matter of reinforcing, explaining, reminding what was going on.

Now that she is on so-called alternative therapies and thriving, getting stronger and even thinking of returning to work, it all seems a bit confusing, but, with the true resilience of childhood, Ameli carries on.

How to talk to children about death:

How do you talk to children about difficult situations? Do you remember when you first lost someone? How was it dealt with and how do you think it could have been handled differently?

Visit Hobo Mama and Code Name: Mama to find out how you can participate in the next Carnival of Natural Parenting!

Please take time to read the submissions by the other carnival participants:

(This list will be updated by afternoon March 12 with all the carnival links.)