Today I was blessed to be able to play host for The Big Latch On in Farnham, with the support of wonderful mamas who came together to beat the world record for mother’s breastfeeding at the same time.

To mark this occasion on Friday 2nd and Saturday 3rd August 2013 at 10:30am thousands of breastfeeding women and their babies or children across the world will gather in their own communities to take part in the Big Latch On, a synchronized breastfeeding event in multiple locations.

The first Big Latch On took place in Aotearoa New Zealand in 2005 and was introduced to Portland, Oregon in 2010 by Joanne Edwards. It has now taken off globally and in 2012  8862 children were counted breastfeeding as part of the Global Big Latch On.

In 2012 the Farnham, Surrey Big Latch On event had 12 mothers nursing 13 babies. This year we had 24 mothers nursing 25 babies (we had one tandem feeding dyad at each event).

Just this week I had someone on Twitter ask me why I felt the need to have a breastfeeding picture on my profile, and said that it offended them. I replied to her that that was exactly WHY I had a breastfeeding picture – so that it will become normal to see a woman breastfeeding, and will no longer be offensive. I simply can’t imagine any of the older siblings at the event today ever turning around and saying they find breastfeeding offensive: they’re growing up with it as normal. Mothers! We’re changing the world, we’re changing the future. We’re doing great! 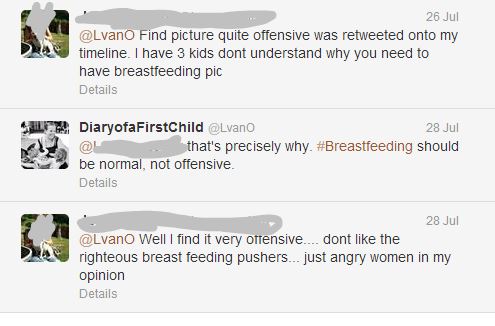 While I was running around trying to keep an eye on my toddler while at the same time making sure everyone knew what was going on and all the official bits of the Big Latch On were adhered to, I did stop at one point, and just watch.  We were a community. A community of mothers and women. I didn’t know everyone who attended today, but it didn’t matter, because we were there for a common aim, and with a common goal.

I love breastfeeding events. They unite us at a base, fundamental, instinctive level.  Breastfeeding events are a celebration, a peaceful demonstration, a communal drinking at the wellspring. Breastfeeding events buzz with excitement, with energy at the knowledge of making a difference, and with taking a stand, drawing our line in the sand, enjoying our right and our freedom, as women, and as mothers.

Do we rally in anger? Do we shout and condemn, and criticise? Every mother in this group has walked a path. It hasn’t been natural and easy for everyone. It’s come at a cost to some. It’s come at tears for others, it’s come as the most natural thing in the world to others still. It’s been an active, conscious decision to others. Everyone has a story to tell about how and why they are here.

Today we feed our babies, we raise our hands, and we are counted.

A huge thanks to Paula from La Leche League Farnham and Krishna from IPEN for being our witnesses today. Another huge thanks to Sara for helping me with the lucky draw and to Wendy and the Natural Birth and Beyond Team for the helium and balloons.

I want to give a very special thank you to a group of businesses that never shy away from supporting the events and competitions I offer through this blog and today at the Big Latch On. Your prizes were loved today: