A group of friends and I had an informal Christmas party today and at the time of arranging it, I’d suggested a Secret Santa £5 gift idea. I didn’t realise just how hard it would be to buy something that wasn’t plastic or junk food that would make a nice enough gift for a friend! I’ve subsequently used the idea for all sorts of gifts – Valentine’s day, birthdays, exam-prep encouragement. It’s very versatile!

I was racking my brain trying to think of a gift idea when it came to me. One of the mamas is having a hard time dealing with her son, and the other is about to have a new baby, so what they could both use is some old fashioned down time, with a little encouragement.

I had very little time available too, so I didn’t put effort into fineries like pretty tags, or even lid covers for the jars, but I’m sure if you take a little more time you could make something really very pretty.

To make the Motherhood Affirmation Tea Jars you will need: 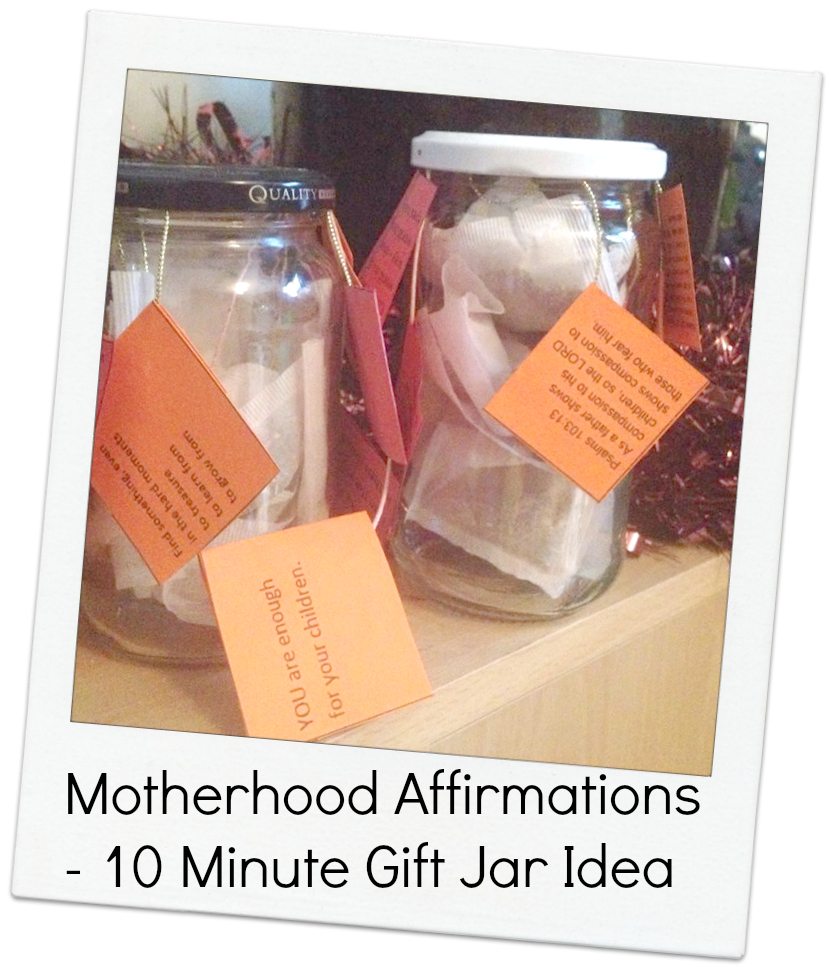 One of the friends is religious, and the other isn’t at all, so for one I did a printout that included scripture verses and for one a printout with just positive affirmations. You’re welcome to print them and use them yourself.

Cut out the printed affirmations, and fold the cards in half. Glue a piece of string into the card, leaving the string long enough to dangle, then staple the string to the tea bag.

Place the teabags into a jar or use vintage teapots for an extra special touch. If you have time, decorate the lid or cover it with something pretty.

Obviously there are a hundred different ways to do this to make it pretty. For example shaped scissors would have been nice on the labels, or gluing labels to teabags that already have a string. Whatever works for you.

I was worried that it was a bit of a silly gift, but one of the mamas (the pregnant one, no surprises 😉 ) actually had tears, so I’m really pleased with how it turned out!

10-Minute Motherhood Affirmations Gift Idea
How To Turn A Garden Gift Into A Garden Adventure
How To: Make a Sensory Light
Scooter Tips & Tricks Infographic