Ameli is loving Winnie the Pooh, ever since we went to see the Winnie the Pooh movie in April this year. As a result, and since we live in a beautiful woodland area, we decided to have a 100 Acre Wood Party.Â  Here’s the low down on how we hosted a fab party:

We were going to have the party in the woods, butÂ a lot of factors combined and we ended up having it in our (rather overgrown) garden. 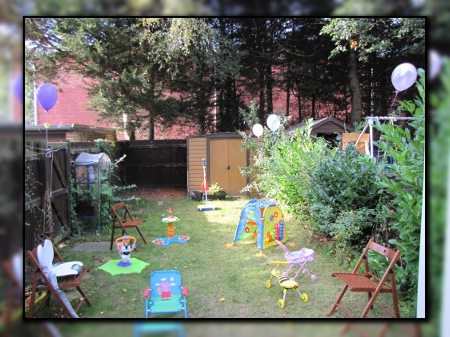 Guests were a mix of our friends without children, and a few friends with children, so I had to try to balance the snacks to not just be kids food.

We had the party from 2 â€“ 4 so that we didn’t have to provide lunch as such.

I went a little over the top, I’ll admit, but I knew early in the year already what the theme would be, so over the course of months I was able to pick up bits and pieces at discount rates, sales and so on. We have a “present cupboard” where I put things I pick up throughout the year, ready to be presents for people, or in this case, party supplies.

We had a goody bag, with toys from eBay, a Winnie the Pooh themed purse for each child from a party shop in South Africa, crayons I found in a sale, and I separated the pages out of a couple of Winnie the Pooh sticker books and added a few pages to each goody bag. I found Winnie the Pooh badges in another shop somewhere, which we’ll be using to close the bags, ready to be given out when guests leave.

We had a few oversized characters for decoration (although these are part of Ameli’s toy collection anyway) and various other little bits and pieces collected over the last few months. 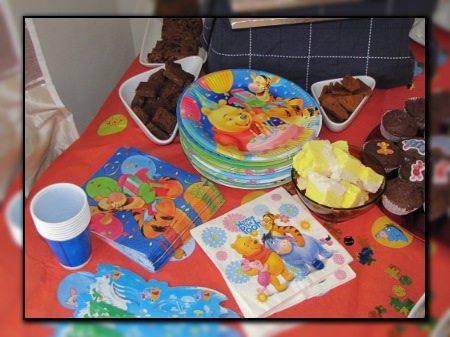 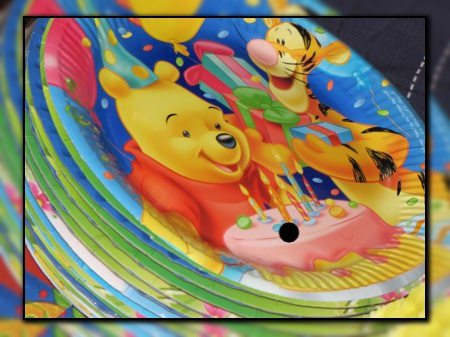 We had a selection of different Winnie The Pooh plates for the party, but these were my favourites.
Food: 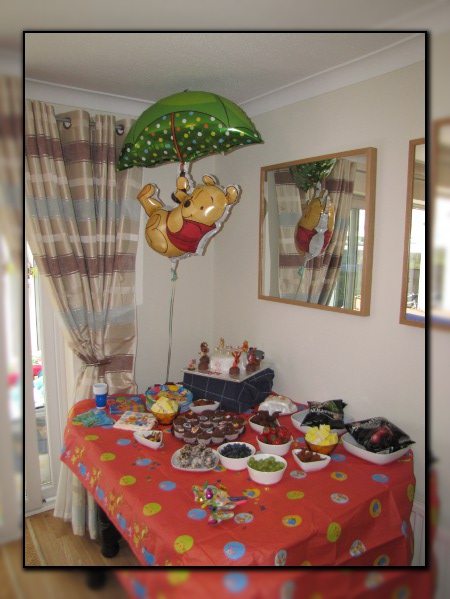 Food, for me, is the central point of a party. It’s the thing that brings people together, and for me, good food makes the party.

For this occasion, I must admit I had very little time and very little energy, so I had to prepare most of my snacks in advance, or choose things that would be easy to make, and easy to eat.

Being all about Winnie the Pooh, and Winnie the Pooh being a lover of mainly honey, I themed the foods around honey. My selections for the children were:

And for the adults:

The party was only two hours, and most of the children were under 3, so I didn’t worry about party games â€“ instead we just had all Ameli’s toys in the playroom available, and hired a bunch of large outdoor garden toys from our local Toy Library and let everyone play as they wished.

There was a lot of sugary food, but also plenty healthy options, the toys weren’t particularly eco, but at least we hired them and can return them, which I think is a great lesson in recycling and sustainability.

Overall, I’m really happy with the party, and if we were to do it again or with a bigger group I’d have some of the adults dressed in Winnie the Pooh character costumes, but as a small and intimate party I think it was great, and most importantly, Ameli had a wonderful time. 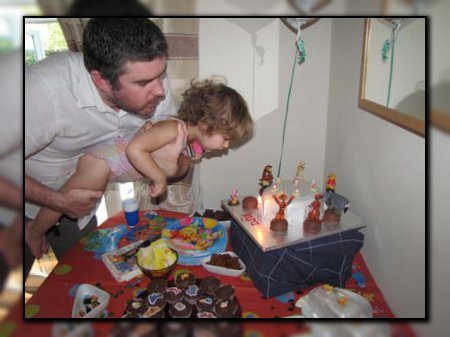 Categories: How To: On Mama's Mind Projects & Series

How To: Make a Sensory Light
Octopus Gift Box Craft
LEGO Party Plans And Ideas
How To Turn A Garden Gift Into A Garden Adventure