I’ve been working on a Sensory Tent for Ameli – somewhere for her to be calm and relaxed. Kind of like a chill out room. It’s just in the living room, since we don’t have space to make a whole room for her, though I wish we could.

One of the items in the tent is a sensory light. Well, that’s what I call it, anyway. It’s a light and it’s pretty and its something to look at. 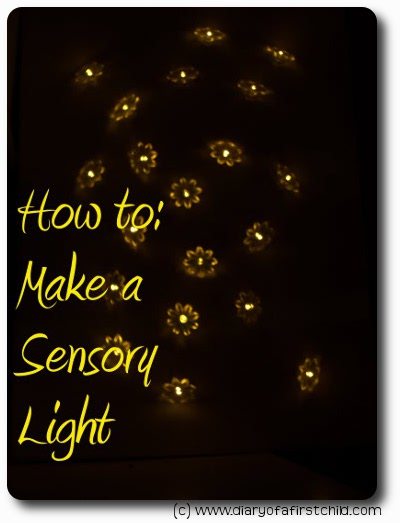 To start with, I drew a spiral on the back of the canvas as a guide for where to put the lights.
Next, using a craft knife, I sliced small holes through the canvass, before removing the flower heads, poking the lights through and replacing the heads.
I tangled the wires at the back so there wasn’t too much room for movement in the flowers, and ideally you could tack a layer of material to the back of the picture to prevent fiddling (leaving space to switch the light on and off.
I think it’s a lovely addition to the sensory tent, and I like it so much I think I’m going to make some into night lights for the hallway or our room.  They are just so pretty.
Tags: How To Lights Mama Craft Sensory Room
Categories: How To: Projects & Series

10-Minute Motherhood Affirmations Gift Idea
Under The Sea Birthday Party
How To: Make a Sensory Light
Our Disney Frozen Party