If I were to have any regrets about my life before children it would be that I didn’t take enough advantage of the theatrical options that life in London offers. I mean, we did go to Royal Albert Hall, we did go to the National Opera and we did see ballet. We saw King Lear, and we saw amazing concerts from Leonard Cohen to Nickelback, but considering that we lived in London, and that we had two good full incomes, we really didn’t take advantage as much as we could have.

I do love the theatre though, and it is my sincere hope that the girls will grow up loving it too. Which means that we need to expose them to it now, in their childhood.

When Kids Week came along a few months ago, I was thrilled to get two adult tickets with two free child tickets for The Tiger Who Came To Tea Live.

We walked into the theatre with no expectations, since we have never actually read the book and had no idea what Judith Kerr’s story was about. Sometimes its nice that way.

The Lyric Theatre in London is beautiful, small and perfect for a show aimed at children. We had front row seats, so the kids had to sit on our laps to be able to see the whole stage.I only realised this a few minutes in, and Aviya’s face went from ‘that’s nice’ to ‘WOW’! 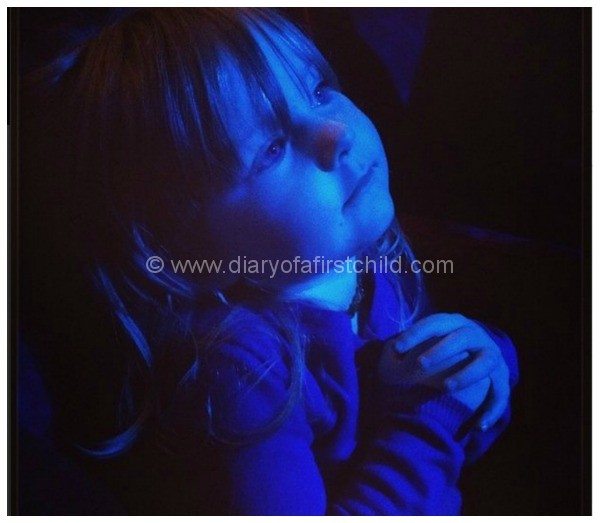 The show itself is highly engaging, with the audience being encouraged to participate from the off. They make use of ‘old tricks’ like a bit of slap-stick comedy from the father, or the Tiger knocking on the door and disappearing – cue hundreds of children shouting warnings at the cast, but it works brilliantly. The children adore it.

The actors entered the stage with huge smiles and full of enthusiasm. They sang and had fun and the audience loved it. The children were mesmerised by the on stage magic – the disappearing food, emptying juice bottle and vanishing contents of the cupboard and fridge.

The Tiger Who Came To Tea Live

The tiger/father/postman/milkman was played by Matthew Dudley. The tiger was a huge suited hind-leg standing creature made up entirely of frills and the actor who played him was fantastic. The kids loved the tiger and my daughter has been emulating his walk and curtsy all day long. I was worried that a huge stuffed tiger would be scary for the kids, but it wasn’t – his way, his movement, him presence, were all comical and lovable. He was really very well portrayed.

The actress who plays Sophie, the little girl, Abbey Norman, is wonderful too. She had such a lovely singing voice, she was an absolutely mesmerising. She was full of energy and looked like she was having fun.

Finally the mother, Jenanne Redman, was so like a real mother: she led the tick-tocks and told the story in the ‘everything on stage is a prop’ kind of manner – like the passing of time, had fantastical facial expressions, and made everything happen – she brings out the food, makes the bathroom appear, and loads of other little scene setting things, that are largely unnoticed…. pretty true to life, I think! I did laugh out loud when the tiger said he was hungry and she grabbed her daughter away from him. So mother like indeed. 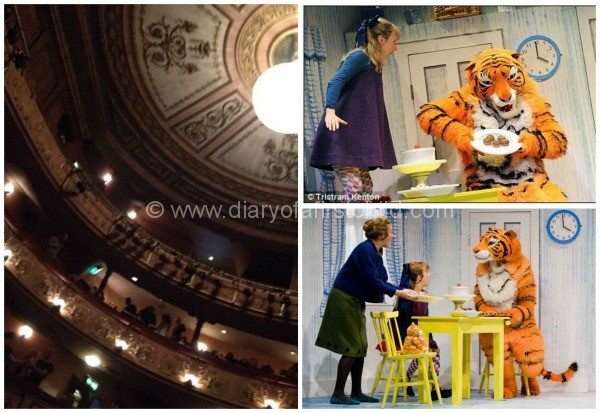 I think the real magic of this show is definitely that of the props. The tiger eats all the sandwiches,cakes and biscuits off the plates, so there’s obviously some kind of mechanism to flip inside of the plate upside down.  My daughter is convinced the Tiger ate them.

There must also be an opening back to the cupboards and the fridge, that someone takes things out as the large tiger “eats” through everything. It really provided an element and awe and magic and reality that the children adored and I appreciated.

We loved The Tiger Who Came To Tea, the actors, the set and the props. It was a fantastic show, and a brilliant 55 minutes of day time entertainment for the kids.

Here’s a little clip from the live stage show:

We’re All Going On A Summer Holiday…
Nozstock: The Hidden Valley – A Family Friendly Festival
The Magic of Legoland, Windsor
The Living Rainforest, Berkshire {PlayLearning Themes}