Pavilion have released a new version of Alice’s Adventures in Wonderland, illustrated by Michael Foreman. 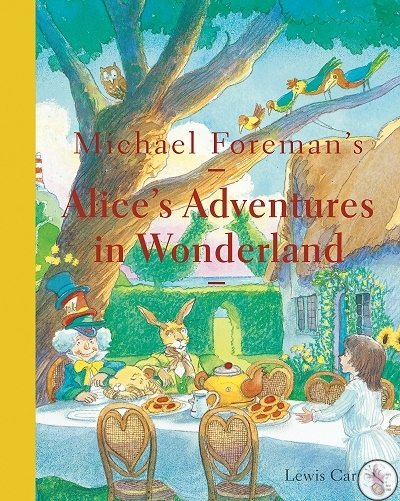 The traditional story in this new version of Alice in Wonderland is the same story we all know and love, as Alice falls down the rabbit hole, making her life ‘curiouser and curiouser’. The story has all the well loved characters, including the mad Hatter, the Queen of Hearts and the Cheshire Cat, but Foreman has put his very own spin on it, as an artist is wont to do.

As compared to the bold and bright pretend world of a cartoon Alice in Wonderland this version is slightly darker in it’s rendering of Alice, but at the back of the book the illustrator explains his reasoning for this – he uses a picture of the actual child that inspired Alice, a girl called Alice Pleasance Liddell as the starting point for his Alice, which I think is unique and such an amazing way to pay respect to a literary character and the author.

Another thing I don’t think I’ve seen before is that the illustrator makes the real world sepia-toned, while Wonderland is in full colour.

While this is essentially a chapter book there are images on every page, with some pages sporting full paged images of giant mushrooms, huge Cheshire cats, croquet games, and all the other scenes and characters from the story. The text is large and the pages are a large size too, so it makes for easy reading for younger readers without being annoyingly oversized as a book to read out loud.

Illustrators are often overlooked in book reviews, but I do think that this one brings the book to life in a new way, something an illustrator could be proud of. Finding a picture book illustrator for hire who can show the story in the same style as the author’s vision must be quite a challenge, and this rendition of Alice in Wonderland has done it really well. 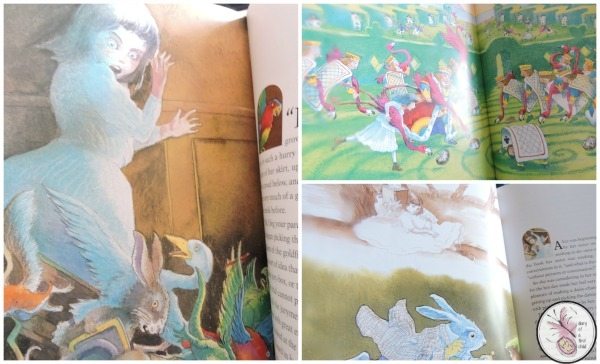 Foreman says that “Alice’s Adventures in Wonderland is perhaps the pinnacle of that range of books which loom large as a series of challenges in the career of an illustrator”. I can totally see this – I think it’s pretty much the same thing for an author really – who wouldn’t like to write a story that’s still popular and loved enough to inspire new editions almost 200 years later!

How To Be A Cowboy – Book Review
Books To Help Children Cope With Younger Siblings
Hold That Thought, Milton {Book Review}
Can I Eat That {Book Review}