I really enjoy game cubes – I’ve made a few of them over the course of parenting, like this activity cube for rainy days – and was going to make one for animals & emotions to go with our feelings and emotions theme, but then happened across this printable version on Twinkl. I decided to save my wooden blocks for another time, and printed this emotional animals game instead.

The premise is simple:

One ‘dice’ has feelings or emotions on it, and the other has animals. You throw both at the same time, and then act out the feelings of each animal. It’s a lot of fun and produces a fair amount of laughter.

The best ones were those like ‘angry dog’ and ‘excited elephant’, though some like ‘sad mouse’ or ‘crying rabbit’ took a bit of thought – and were the ones that made for the most conversation. “What would make a rabbit sad, do you think?” and so on. 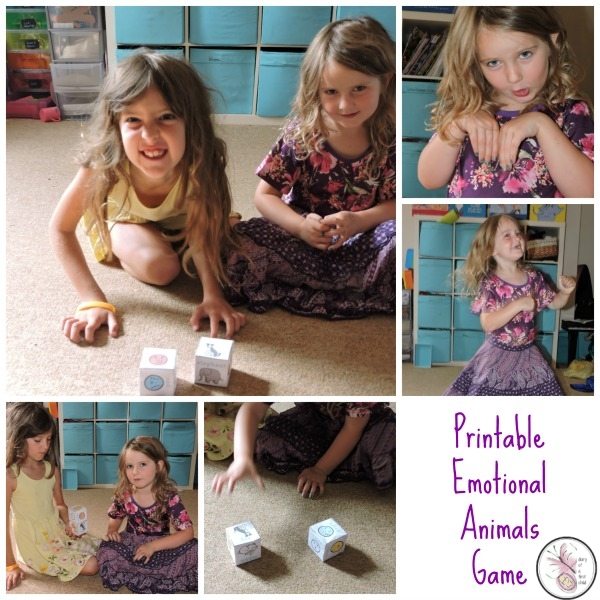 If you do want to make these dice yourself, good emotions to add are: ‘happy, excited, sad, angry, bored, scared’ and the animals on this set are ‘dog, cat, mouse, lion, elephant and rabbit’ – both rabbit and mouse are quite limited in their actions, so if I was making it I’d probably swap one of them out for something else – maybe ‘bird’ or ‘cow’.

The emotional animal game is a good game for three specific things: encouraging children to talk about the specific emotions, it can draw out things that they wouldn’t have known how to talk about. For example asking what might make a mouse sad could be followed with ‘what makes you sad?’. Of course, then it’s important that we take the time to listen.

It’s also a good game for distinguishing and identifying the emotions and feelings, and looking at what type of expressions go with them, and seeing how those expressions can be identified in a sibling – “When you see your sister looking like that, [angry, say] you know that you should probably stop doing what you’re doing”.

For more games and activities around feelings and emotions, click on the image below: