We’re in the middle of National Storytelling week, so we’ve spent a fair bit of time this week doing just that. There are loads of different ways of bringing stories to life, and while something like painted pebbles might be beautiful, we’re not all quite so talented! There’s a list here of different ways to create story prompts, but one we’ve been doing this week – and you can download it or template for your own below – is story cubes.

Story cubes require a template, a printer and an on-the go imagination. 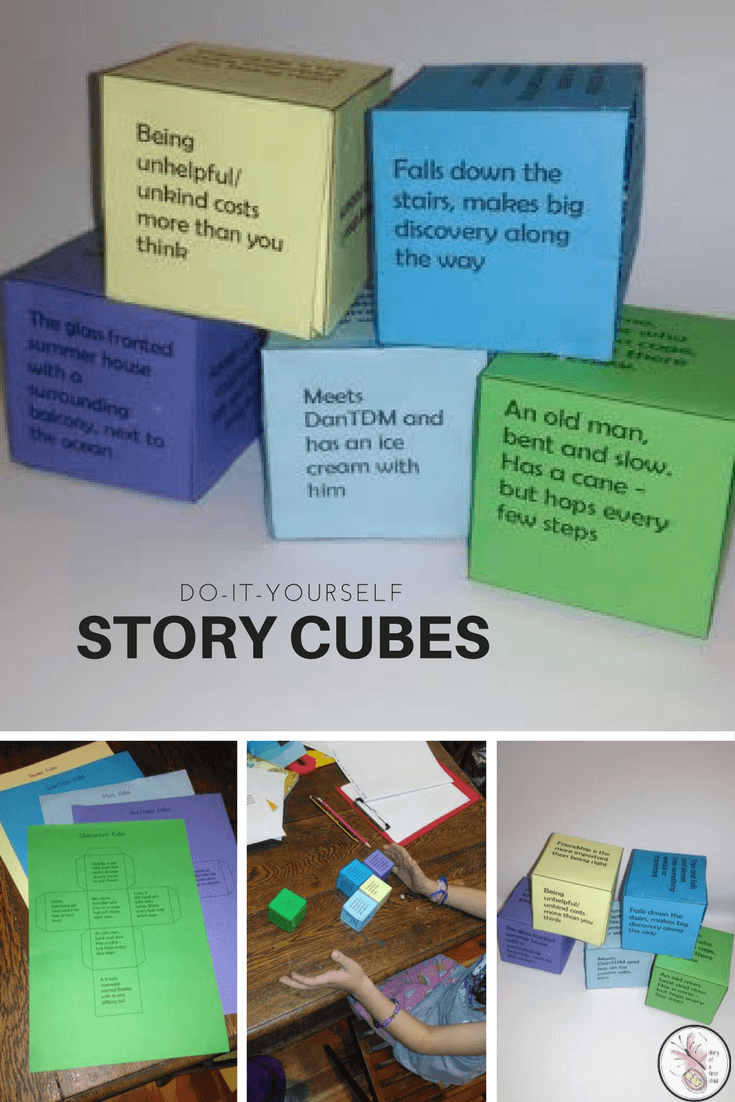 I created these cubes based on the template I’ve included in the download, and we sat together coming up with first character descriptions, then some random and unrelated settings. We threw out plot ideas, and conflict ideas, and then looked at common themes in the books we loved, and created some of our own for the final cube.

This was quite a tricky exercise as I didn’t want the cubes to be automatically related – for example a mermaid character to automatically have a matching deep sea setting. I wanted each element to be able to stand alone.  It’s also remarkably tricky not to confuse conflict and plot! 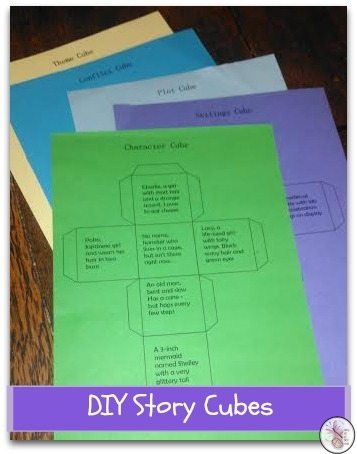 Once cut, glued and cubed, the cubes ca be used like dice: throw them in the air, choose the prompts that come out on top, and create a story.  Ameli (7) was trying to read the cubes and from them form a 5 line story, but that’s not the aim of the story cubes.

For example, “An old man, bent and slow.  Has a cane – but hops every few steps” should be used to inform the story, rather than be the story.

“One day, as I was sitting on the balcony of my house, gazing over the ocean and basking in the warm mid-day sun, I saw my neighbour Ben, an elderly gentleman, heading out for his usual afternoon walk. I was about to call over a greeting, as I always did at this time of day, when I noticed something unusual. Instead of his normal stooped form, leaning heavily on the wooden cane he spent a whole summer carving from a bulky bit of driftwood that had floated up during a storm, Ben was taking two, slow, laboured steps, then hopping as if playing an imaginary game of hopscotch! I furrowed my brow, trying to figure this out, when there it was again! Step, step, hop hop hop, step, step, hop hop hop.  Curiousity piqued, I had to know what was going on. I grabbed my sunhat and slid into a comfy pair of flip flops I’d lazily discarded at the door when I brought the hot pastries back that morning, and set off down the road, intent on getting to the bottom of Ben’s strange behaviour.”

This is an incomplete story – it doesn’t include the rest of the plot, or the conflict, and the theme hasn’t been revealed yet, but it should give you an idea of the role of the story cubes as prompts.  That same glass fronted house featured in the story of the Japanese girl Kobo, and in the story of the marshmallow suit! It’s amazing where the same prompts can lead different people. 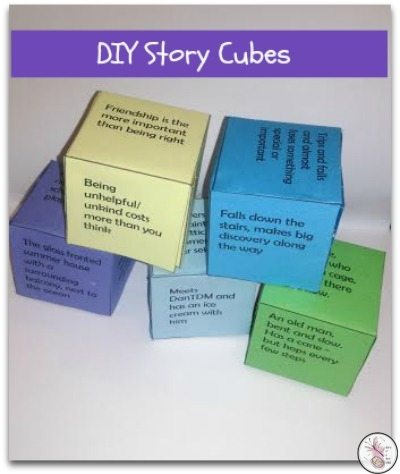 You can use these prompts, or create your own – if you’re creative you could even draw images on them for younger children. 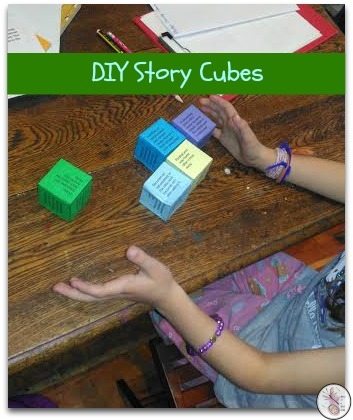 Download the free Story Elements workbook here. The first few pages look at the characters, plots, settings, conflicts and themes of your favourite stories, and then there’s an opportunity to create your own story, and finally, the templates for the Story Cubes.

Join our mailinglist for this free download (you can unsubscribe at any time!)

Results Are In! Grow Your Own Potatoes Project
“Word Has It!” Game Review
26 Free Dr Seuss Book Readings And Movies
Lessons Winnie The Pooh Teaches Us About Friendship