I’m sure we’ve all been there – half way through handwriting something, our hand cramps up and we wonder when exactly we last had to write so much. A few weeks ago I searched all around the house for a pen! I call myself a writer and I don’t have a pen in the house! Finding this simply unacceptable, I popped to The Works while I was in town and bought a whole handful of pens which are now all safely nestled in the bottom of my handbag, waiting for their next use.

It did leave me thinking about writing though, and about how hard it is to get my kids holding a pen and paper. Ameli, for example, is quite happy to do worksheets, as long as she doesn’t have to write down any answers.  Or at least not those that require long answers.  I do feel, however, despite this amazing digital age and the fact that even infants know how to swipe a touchscreen, that handwriting is an essential life skill. 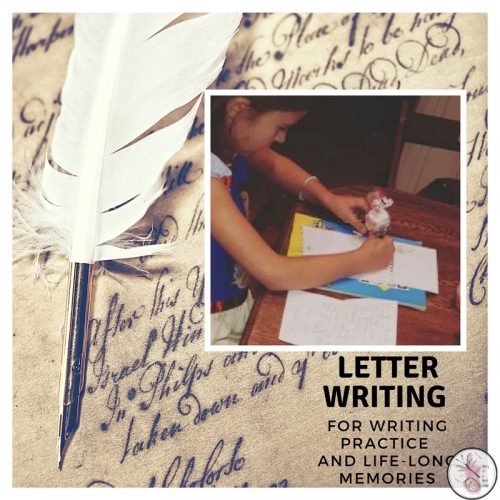 Visiting old friends over New Years we were awwing over how my Ameli and my friend’s son Jonathan still get on like peas in a pod six years after first meeting, and the thought occurred to me that we should get the two of them writing to each other! I had a pen pal growing up and I remember the excitement of a letter arriving with my name on it. How lovely would it be to give my child that same experience?  I suggested it, and we agreed, and I didn’t think of it again.

We were still driving back home, when a text popped up on my screen saying that Jonathan’s first letter was winging it’s way to us, and lo and behold, two days later, the letter landed in our post box. Ameli was so excited!

Getting her to sit down with a pen and paper the next day to reply to Jonathan was the simplest ‘exercise’ I’ve been able to do with her! The letter wasn’t long, and she herself asked Jonathan if he’d like to be her pen pal! And by the end of the day, the letter was in the post and on it’s way.

I think I might go into that old trunk at the foot of my bed that contains all the memories of my childhood and teen years and have a read of the letters I exchanged with Kevin, a boy a few years older than me, but whom I loved like a brother. Kevin eventually got married and didn’t think it was appropriate having a school girl as a pen pal anymore – maybe he was right, but to me he was the big brother I could share everything with, confide in and who always knew the right things to say.  I don’t know what happened to Kevin in the 20 years that have passed, but I often think about him, wondering what he’d say to me now and I’m so grateful that I had that experience – not just the friendship, but the walk to the post office, the thrill of opening the letter box and seeing Kevin’s standard white envelopes, the joy of walking home fingering the thickness of it, wondering how many pages there were, getting home, making a drink, heading out to a sunny spot away from everyone else, and diving into the grown up world of the boy I’d cared about who had gone off to join the army and the world outside our bubble.

I loved the slowness of the relationship that built, the friendship that not even time and lack of contact can change, the feel of paper, the smell of ink. Those hours spent writing to and reading his words have always been a safe and happy space in my heart and memory.

My girl is younger now than I was then, but so is her pen pal, so hopefully the act of writing each other letters will cause their friendship to grow and blossom into a forever one, and if not, and time sends them their own ways, at least she’ll have a great outlet for practicing her penmanship in a way that will add meaning to her life.

And of course, it’s not just for them and others too. Soon after my mother died, I was looking through my box and found handwritten letters from my her to me, during my teens. I can’t tell you how I value those now, and how I value writing love letters to children. 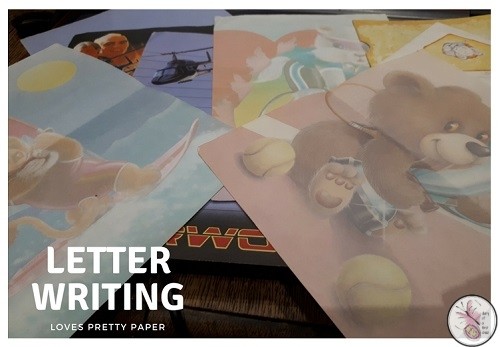 Here are five tips for encouraging children to write letters:

1. Give them pretty or funky paper for letter writing

Let your child choose the paper they’ll be writing on. I still have a box of individual sheets of beautiful paper that I collected as a child – one sheet from each of my favourite writing pads. I know it’s a waste, 30 years on, but I do love those papers and can’t convince myself to use them!

I think this is especially important for kids that don’t really use pens in the course of their school day (like my home educated children). Using a decent pen that provides proper hand support is like using a good hammer or a good saw. The better the tools the better the workmanship.

3. Have addresses and stamps readily available

I’m notorious for handing people the letters or cards I wrote them – six months later. I once wrote a dozen thank you cards after a birthday party and found them behind the fridge two years later when we were moving house!  Make sure you have the address available and stamps on hand so that letters don’t go to that pile at the top of the fridge. Get them sent out same day, if you can!

4. Have a lock box for their return letters

Have a lock box or letter safe or even just a box file available for returned letters, so that they don’t end up scattered around the place and soon after in the bin. These can be precious memories in years to come. I may not even remember some of the faces of the letters in my memory box, but I know that they make up part of my history. Paper reminders of a life, a friendship, a first love, shared.

I can get really frustrated with Ameli when she sits to write a letter with no forethought or planning. I want her to write a rough draft in pencil, but she just heads straight into it with pen on the beautiful paper we’ve chosen. Which means there are more scratches on her paper than in a chicken coop, but this is her letter, and if I fuss over it, she just won’t want to do it anymore. I have to have faith that in time, she’ll want to improve the appearance of her letters. When I micromanage her, it’s no longer fun, and it’ll only have positive meaning to her if she enjoys it, so I have to step aside and let her do it her way, imperfections and all.

January 23 is National Letter Writing Day in the UK. Why not grab a pen and paper and send someone a good, old-fashioned snailmail letter. Asking for a stamp in the post office is quite the blast from the past!

This post contains affiliate links. You will not be charged for clicking on, or buying through them, but I will receive a small percentage to help with the maintenance of this blog.

Projects and Activities With Badges, Awards Or Qualifications For Kids
It’s Time For A Wild Flower Hunt!
“Word Has It!” Game Review
DIY Story Cubes {And Free Story Elements Download}