Winnie the Pooh may be seen as nursery decor more than anything else these days, but actually the lessons in the stories are suited to a much older audience. In fact, they’re perfectly suited to children heading out into the world forming relationships and developing friendships.

The stories in Winnie the Pooh can teach us so many things about friendship, if we can just take the time to read them with our children, and naturally discuss the issues as they come up. 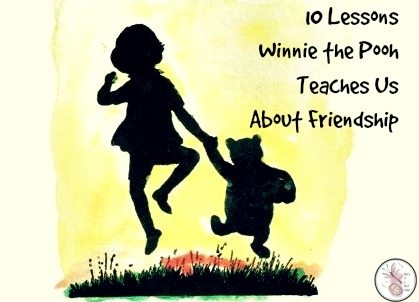 Here are ten of the biggest lessons I learnt about friendship in Winnie the Pooh:

Eeyore’s friends may well have forgotten his birthday, but they made up for it – or tried to. In the end their attempts at gifts – a balloon and a pot of honey – (both regifted, mind you – thrifty lot, them!) ended up being a deflated bit of rubber and an empty pot, but Eeyore was grateful for the effort made. He was happy about receiving gifts and he was happy to be remembered.  After a rocky start, there was even a party for him.

“But Eeyore wasn’t listening. He was taking the balloon out, and putting it back again, as happy as could be…”
Eeyore Has A Birthday 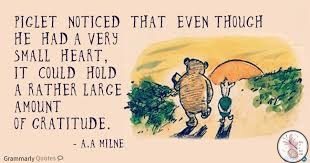 2) Rescue your friends when you can

After days out on a branch, Pooh runs out of honey and goes in search of his friends. It took him a while, but in the end, he got there, and he saved poor Piglet just in the nick of time (from Owl’s terribly long story, rather than the flooding). So it took him getting hungry to get there, but in the end, Pooh was there for his friend.

“You can imagine Piglet’s joy when at last the ship came in sight of him.”
Piglet Is Entirely Surrounded By Water 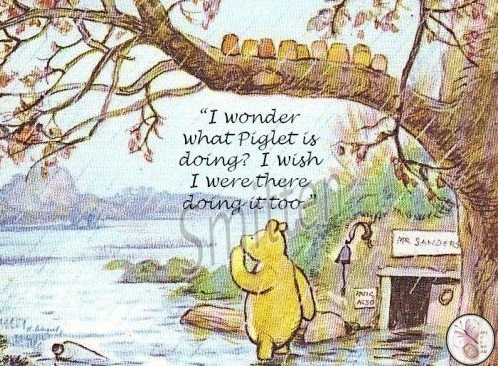 3) Honour your friends when they do good

Christopher Robin throws a party for Pooh, to commend him for saving Piglet. Of course, Eeyore was a bit down as he thought the party was for him, but in the end, but he lets it go with his characteristic pessimism and lets everyone get on with honouring Pooh. Sometimes you have to swallow your own feelings to give your friend their moment in the sun.

“This party,” said Christopher Robin, “is a party because of what someone did, and we all know who it was, and it’s her party, because of what he did, and I’ve got a present for him and here it is.”
Christoper Robin Gives A Party

We all have that friend who never demands your time, never insists on anything back, and is almost easy to forget sometimes, because they’re just so consistent. Don’t forget them. Piglet is small and shy and afraid, and yet he is still there, always at Pooh’s side, coming through for him when he needs him, getting bathed when his friends get him to pretend he is Roo, making plans to get his bouncier friends out of trees. Good old faithful Piglet.

“Your tree is blown right over, Owl, and there’s a branch across the door, but Christopher Robin and I can move it, and we’ll bring a rope for Pooh, and I’ll go and tell him now, and I can climb down quite easily, I mean it’s dangerous but I can do it all right, and Christopher Robin and I will be back in about half an hour. Goodbye Pooh!” And without waiting to hear Pooh’s answering “Goodbye, and thank you, Piglet”, he was off.”
Piglet Does A Very Grand Thing

5) Friends come in many shapes and sizes; friendship requires acceptance and compromise

Having a diverse friendship group expands your horizons and opens you up to more of the world. Surround yourself with different people with different interests and strengths and life will never be boring. Friendships only work when we allow our friends to be different to us, and accept them for it anyway. Rabbit accepts that Pooh is going to eat all his honey, Pooh accepts that Tigger just isn’t the same without his bounce, and well, no one’s chased Eeyore out the 100 Acre Woods yet!  He just was as he was, and his friends accepted him that way. 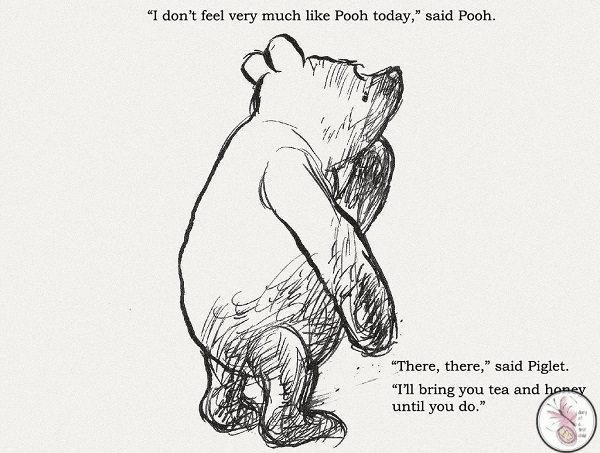 6) Be open to new friends

What would have happened if the Rabbit, Piglet, Owl and Pooh hadn’t (eventually) accepted Kanga and Roo? What if they had banished Tigger? How many “expetitions” would they have missed out on!  New friendships bring new opportunities and new experiences. 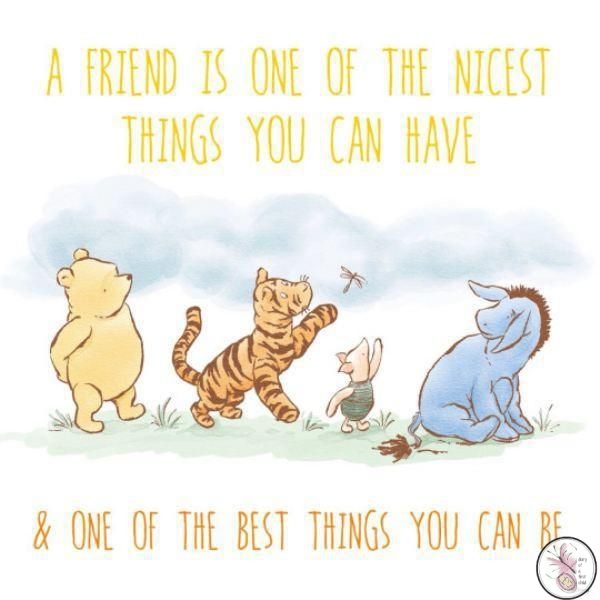 7) Friendship is about sticking together

Through floods and rain, through monsters and missing friends, through new faces and challenges, Winnie the Pooh and his friends stick together and because of that they make it through. (The fact that most of their ‘adventures’ are through lack of education or misunderstanding is a whole different issue. I guess we’re all young and dumb at some point!)

So he went home with Pooh, and watched him for quite a long time… and all the time he was watching, Tigger was tearing round the Forest making loud yapping noises for Rabbit. And at last a very Small and Sorry Rabbit heard him. And the Small and Sorry Rabbit rushed through the mist at the noise, and it suddenly turned into Tigger; a Friendly Tigger … who bounced, if he bounced at all, in just the beautiful way a Tigger ought to bounce. “Oh, Tigger, I am glad to see you,” cried Rabbit.
Tigger Is Unbounced

8) There is more than one kind of friend

Piglet and Pooh are the best of friends. Pooh and Christopher Robin are the best of friends. While Christopher Robin and Piglet are friendly, we don’t hear of a particularly close bond between them too much. Tigger bothers Pooh a bit, but they adventure together, and Roo and Pooh are friendly, but do they ever have heart to hearts? Different people have different friendships, and we have to allow our friends to have other friends too.

Which explains why he always lived at Kanga’s house afterwards, and had Extract of Malt for breakfast, dinner and tea. And sometimes, when Kanga through he wanted strengthening, he had a spoonful or two of Roosbreakfast after meals as medicine. “But I think,” said Piglet to Pooh, “that he’s been strengthened quite enough.”
Tigger Comes to the Forest 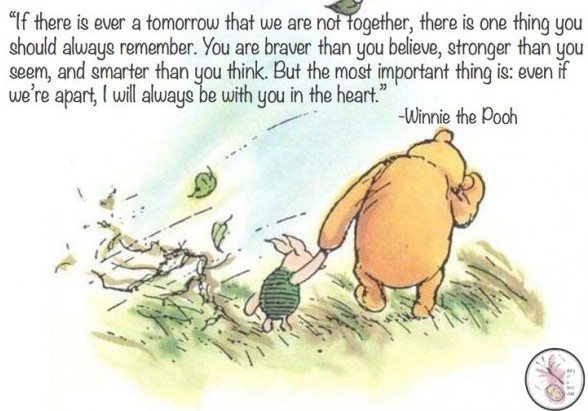 This is what I tell my girls every day. Have courage and be kind. You can see how this mantra plays out in the Hundred Acre Woods. Even scared Piglet is courageous when it’s needed. Rabbit is often short-tempered and yet he still feeds Pooh enough honey to get him stuck in a door. When you use courage and kindness as your guide for how to conduct your relationships, you can scarcely go wrong.

“You have a house, Piglet, and I have a house, and they are very good houses. And Christopher Robin has a house, and Owl and Kanga and Rabbit have houses, and even Rabbit’s friends and relations have houses or something, but poor Eeyore has nothing. So what ‘ve been thinking is: Let’s build him a house.”
A House is Built for Eeyore

Some friendships come to an end, some relationships part ways. You will always have the memories, and can return to that place in your heart where the friendship remains. We don’t own our friends, and sometimes we have to let people go. That doesn’t change what we’ve been through and it doesn’t change the joy in having known each other.

So they went off together. But wherever they go, and whatever happens to them on the way, in that enchanted place on the top of the Forest a little boy and his Bear will always be playing. An Enchanted Place