Sunday is National Unplugging Day and one of the ways to go gadget free as a family is to stack up a bunch of board games and spend the day lazing about playing as a family. One of the games we’ve been loving recently is a Ravensburger game called I Found It.

Eye Found It is a fantastic game! 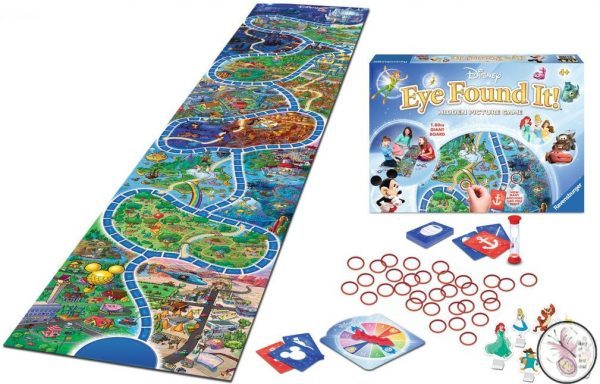 What’s in the Eye Found It game box?

The game board is a super sized, three piece board that slots together puzzle like, and requires a bit of space. The board covers 12 Disney stories, from Cars to Peter Pan, Winnie the Pooh and Alice in Wonderland.

Along with the board you receive a set of game cards, six playing pieces with stands, a spinner, 12 plastic rings and an hourglass.

How Does Eye Found It work?

At the very top of the game board there’s Cinderella’s palace, with a clock tower.  The game pieces start at the bottom of the board.[pullquote]Eye Found It is a really cool game and it tests your observation skills! It’s fun to play! – Ameli, Age 7[/pullquote]

The spinner has numbers – how many places you move forward – and clock towers with one or two written on them. If you land on 1, you move the clock tower at the top of the board up on an hour, if two, two hours. The game continues till the first person reaches the palace, or the clock strikes 12, so it’s a sort of double challenge on the board.  The spinner also has Mickey Mouse ears on it. Land on those and you get to pick up one of the 30 game cards. The game cards will tell you to look for something, for example a table, or as in the picture above, an anchor. You then have the time on the egg timer to place as many rings as you can on as many of those search items on the board –  so if three people are playing, and the first player finds one, the second player finds three and the fourth player finds two, you’ve found a combined six anchors, and all move forward 6 spaces.

There are forks on the path, so when you get to a fork you can choose to go left or right, and there are a small number of Mickey Mouse ears on the game board too, which work the same way as the ears on the spinner.[pullquote]Eye Found it is a good game. People should buy it because it’s very fun. – Aviya, Age 5[/pullquote]

What could be better about Eye Found It?

I can’t think of anything that I’d improve on in the game, to be honest. It’s fabulous. The images are beautiful, and while the game itself is fun, and I think the fact that you’re also racing against the clock is a touch of genius. It adds an element of adrenaline to the game.

Basics of Eye Found It?

The Eye Found It game costs around £19.99 from Amazon and other leading toy retailers. It’s suitable for children aged 4+ and for 2 – 6 players.