I realised a while ago that while toys are all fine and well, games are a really good way to get the kids to play together and sometimes, having actual rules to play by is a bonus too, as there’s less bickering when the rules of play are actually written down (by someone else, not me!) So one of the games the kids have been playing a lot lately is Yeti In My Spaghetti from University Games.

Yeti In My Spaghetti is a modernised version of pick-up-sticks, basically, and you follow more or less the same rules, with the main difference being that you now have a Yeti that you need to keep out of the bowl. 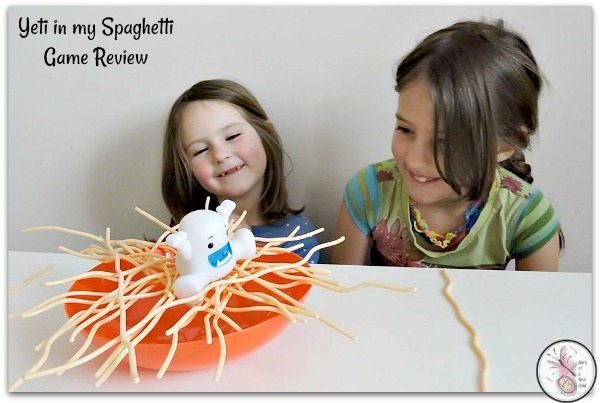 The box contains a red plastic bowl, a bunch of ‘spaghetti’ and the Yeti. You hold the spaghetti in the bowl and let go so that it falls all over the bowl, then place the Yeti carefully on top.

Every player then takes a turn removing a single spaghetti, and the winner is the last person to successfully remove a their faux-pasta before the Yeti drops.

Setting Up Yeti In My Spaghetti 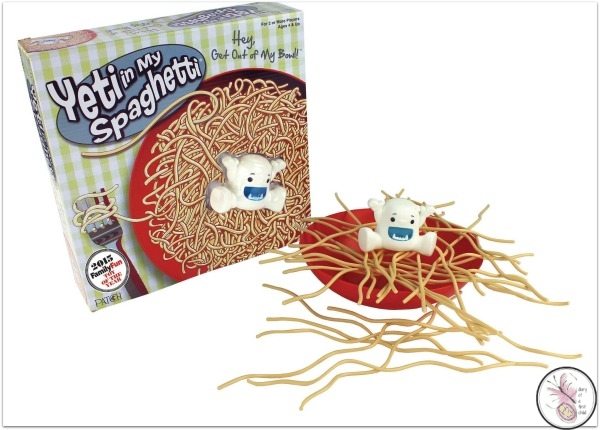 Yeti in my Spaghetti is a really easy game to set up. Pop the pasta in the bowl, put the yeti in place, done.

Game play time is also only a few minutes – maybe a maximum of 5 minutes, and it’s one of those games that can elicit howls of laughter and frustration in a short space of time.

Details of Yeti In My Spaghetti

Yeti in My Spaghetti is suitable for two or more players, and they recommend ages 4+, though I can’t imagine a little one could really swallow any ‘small parts’ on this game. To make it suitable for smaller players, perhaps just play it without the Yeti, to make it a little easier.

If you’d like to see the game in action, find out a little more about it, hit play on the video below.

Princess Colouring T-Shirt
A Family Holiday In Bluestone Wales
Mindful Nurturing – Mindful Holidays: How To Have A Stress Free Holiday Season
Camping Toys and Games For Any Weather