We love parties here and plan for them months in advance. Aviya’s 6th birthday party was a Shoppies and Shopkins Party. We decided on a pamper party as that was something we could do indoors no matter the weather and because the party was in the mid-afternoon, we just needed snacks to nibble on.

I didn’t really have a lot of time for food, if I’m honest, so a lot of what I presented was bought food, Shoppified with images from the internet. A lot of our guests were vegetarian or vegan so I labelled the items that were vegan with a (V) so the kids knew without having to ask for each item too.

Prep for this party was really easy, and having bought things over the course of a few weeks it wasn’t terribly expensive either.

The cupcakes – that recipe specifically – is good made a day or two in advance, the ‘polish’ was made the weekend before the party and kept in a sealed container, the cake was made the day before and the fruit was cut the morning of – that’s pretty low key and the kids loved every single thing!

You can download and print the cards we used – cut them out, fold in half and off you go. There are a few spares too, so you can either print pics from the internet or find stickers that relate to your food and add them. 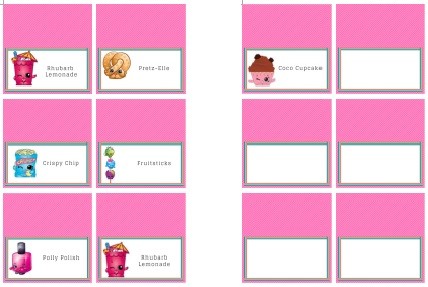 Why This Summer Is The Time To Start Working on Your Fitness Goals
Festival Of Food – June Call For Submissions: Summer Smoothies and Mocktails
Planning & Preparing For ‘In Case Of An Emergency’
How to Simplify Your Child’s Morning Routine