I’m a fully grown adult, and sometimes, even I think the world is a pretty scary place. It makes me wonder how it must be for children in an information age – with words like “war” and “bombing” and “refugees” mentioned in news reports and on newspaper headlines and on our Facebook timelines, children must often find the snippets of pretty serious information they catch quite overwhelming.  For this reason I was interested in reading Nicola Davies’ new book, The Day War Came.

The Day War Came was initially written and published as a poem, then later picked up as a children’s book. It’s written in true Nicola Davies style – beautiful lyricism that flows off the page and tongue but the story is simultaneously non-threatening and sad with a message of hope and simple encouragement.

Note: Ameli (8) said that the review below gives too much information on the book, so spoiler alert! however, as I explained to her, this review is for parents to decide whether this book is right for their children, rather than for children to decide whether they want to read it or not.

The Day The War Came starts with a family having breakfast, and the narrator going to school, learning about volcanoes, drawing birds and singing.  It’s a normal day with normal people, when suddenly, “after lunch” war came. 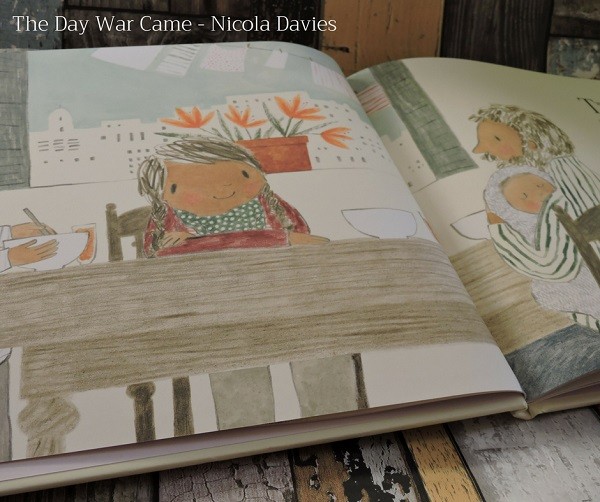 It came in a “splattering of hail, a voice of thunder, then all smoke and fire and noise that I didn’t understand“. The pencil drawing-style images are simple, yet incredibly effective.  I’ll say a little more on that point later. 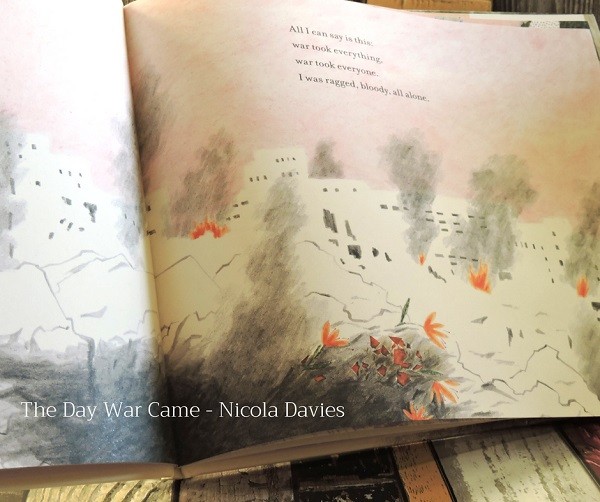 The story goes on to share the protagonist’s tale of finding the blackened hole that was her  home (presumably with her mother, father and baby brother in it). She then runs, walks over fields and roads and mountains, in the back of trucks in buses, and on boats – the whole refugee journey. The lines “…went on a boat that leaked and almost sank; then up a beach where shoes lay empty in the sand” flashes the reader back to that photo of the lifeless body of little Aylan Kurdi washed up after drowning on a crossing to Greece.

The narrator arrives in a refugee camp, finds a corner with a dirty blanket and tells the reader how war had crawled under her skin and into her heart.  She walks and walks through beautiful streets in pretty villages, looking for somewhere that war hadn’t reached, but seeing it in the shut doors, the unsmiling faces, and the endless turning away.

If you’re looking for a book where you can learn a lot from about life, I recommend you guys check out The book of mysteries written by Jonathan Cahn. 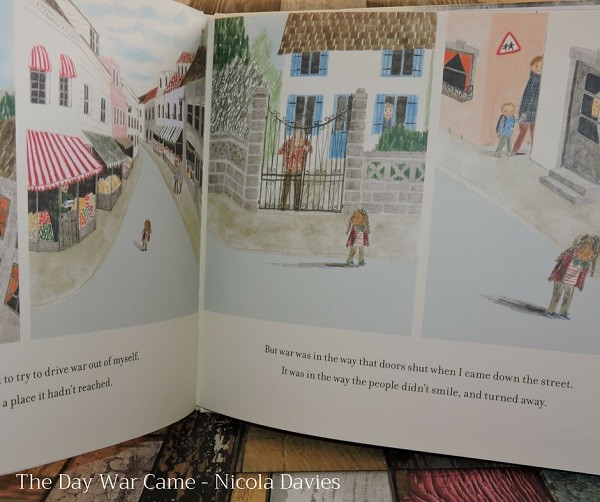 The narrator comes to a school and sees children learning about volcanoes, drawing birds, singing – a beautiful parallel drawn to her previous life. She wants to join the class, but the teacher tells her there’s no space for her as there is no chair available – this is the true part of the story, from which the whole book was born – and that she has to go away.

She goes back to her hut, crawling under her blanket, when at her door a child appears with a chair. The child brought her a chair so that she can go to school.  In fact, all the children had brought chairs so that all the children from the camp could go to school, “pushing back the war with every step”.  *insert plenty tears from me at this point!*

Thoughts on The Day War Came

I think this is a beautiful, brave book. I think it took compassion to write and guts to turn into a children’s book.

My girls and I have been learning about Anne Frank and specifically The Netherlands during the 2nd World War, so this book, with it’s refugees and broken lives, is very fitting for us to read now, but it’s been a careful balancing act. I don’t want to scar them for life, either.

So about that ‘I’ll tell you later’ bit.  There’s an quote by Isadora Duncan where she says “there is no necessity to censor the literature of the young. What one has not experienced, one will never understand in print“. I think that was more true in a world before television pumping images into our minds, but I think the point comes across sufficiently for this book.

In the simple drawings I see represented every war movie, every news bulletin, every horrible truth; in the image of the ‘row of huts’ that she reaches, I see superimposed in my mind’s eye the squalor of flooded, freezing tents, not the ‘clean’ rows of monotone huts. So I found the book quite powerful and a little bit disturbing but the kids didn’t look at it quite so deeply. They saw what was on the page, they heard the message, but they didn’t feel it in their gut, like I do, which I am grateful for. 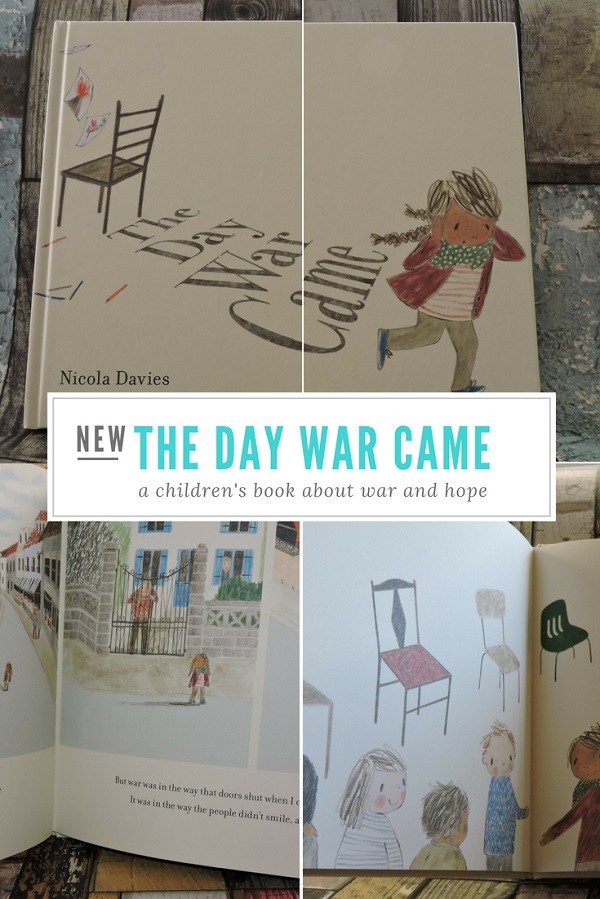 The illustrator for The Day War Came is Rebecca Cobb,  illustrator of numerous children’s books. I love the style she’s employed in this book, with child-like drawings that powerfully show the destruction, the struggles and the world from the child’s point of view.  The ‘ugly’ is portrayed in a clean way so that it’s not overwhelmingly real for a child and the images show much more of the reality of the Syrian refugee problem than a child may even notice. Through the eyes of someone who has seen the news reports and the pictures you can see the bombing, you can see the refugee camps, you can see the lonely child in France, yet it’s done in a gentle way. I think it’s extraordinarily well done. 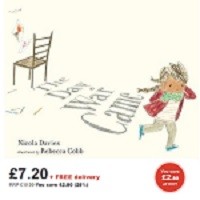