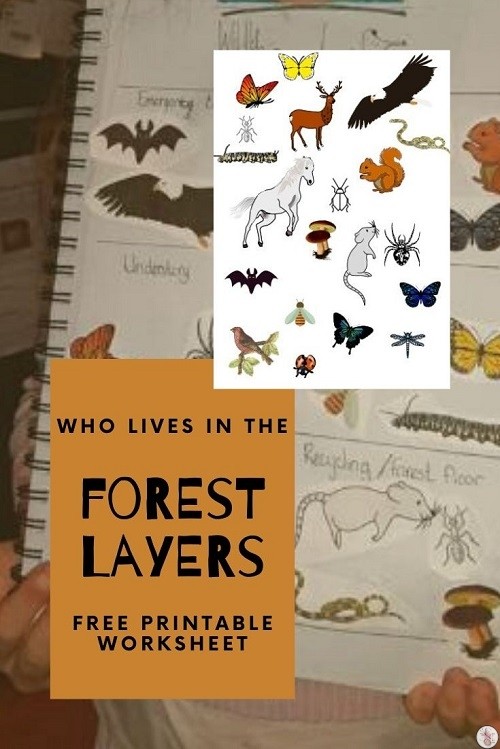 This printable worksheet consists of two pages – the first is for cutting up and the second is an answer sheet of sorts – the animals are separated into their accurate layers. You don’t have to print the second page.

I should also point out that the animals are representative of a type of animal – they are cartoon images, so you should be able to say ‘mushrooms grow on the recycling layer’ rather than x-type of mushroom, which means that the worksheet should be useable anywhere in the world.

There’s also a little flexibility in the ‘answer sheet’ as critters have the ability to move between layers, so while it might be obvious that a deer isn’t going to live in the canopy, a robin might choose to live in the herb layer (as they tend to!) or the understory or canopy! 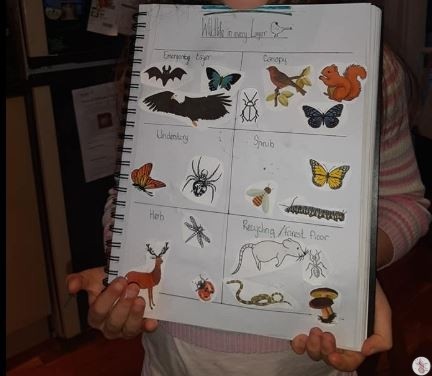 The Animals in the Forest Layers

Forest floor or recycling layer – The forest floor is where recycling occurs, fungi, insects, bacteria, and earthworms are among the many organisms that break down waste materials and ready them for reuse and recycling throughout the forest system. The soil is rich in microorganisms that carry out the natural decomposition of the organic matter.

Recycling Layer – This layer is where everything goes to die and be reborn. Animals in this layer include earthworms, fungi, insects, and spiders, plus countless bacteria and other microscopic life. All these organisms break down the waste materials into the basic chemical elements necessary for new plant growth.

Herb Layer – The herb layer is the home of forest animals that live on the ground. They include such small animals as insects, mice, snakes, turtles, and ground-nesting birds and such large animals as deer or horses. Check this collection of forest animals worksheets for some extra learning with your child.

The Shrub Layer – A well-developed understory or shrub layer will provide numerous nesting and food opportunities for smaller woodland birds.

The Understory Layer – Understory trees provide shelter for a wide range of animals. Many nocturnal species make their homes in the understory layer. You’ll find a lot of insects hibernating in this layer and

The Canopy Layer – This layer is abundant with food. Some butterflies, like the purple hairstreak are rarely seen as they spend most of their time fluttering high up in the tree canopy. The large branches of trees in the canopy layer will provide nesting sites strong enough to support large birds such as Buzzards and Herons. The new spring leaf canopy of trees, particularly Oak, provide feasts for large numbers of caterpillars such as the Winter Moth and the Green Oak-roller Moth. Fruit-eating birds, and insects and mammals that eat leaves or fruit, live in the canopy.

The Emergent Layer – This layer receives the maximum sunlight and is a safe haven for small animals and birds, this layer also protects them from predators. It’s a good place for birds of prey to have a view over the landscape and it’s also a safe spot for bats.

You can download this worksheet for free, but you might find yourself added to a newsletter, should I ever get into the habit of sending out newsletters. By downloading it you’re agreeing to being added to the newsletter, but you’re welcome to unsubscribe at any time.

Sc2/2.1b    identify that most living things live in habitats to which they are suited and describe how different habitats provide for the basic needs of different kinds of animals and plants, and how they depend on each other
Sc2/2.1c    identify and name a variety of plants and animals in their habitats, including microhabitats

Sc6/2.1a    describe how living things are classified into broad groups according to common observable characteristics and based on similarities and differences, including micro-organisms, plants and animals

Also have a look at our worksheets for:

Layers of the Forest

Frida Kahlo’s Mexico
Printable Layers of The Forest Worksheet
Learning About: Xylem Tubes And Phloem In Plants
Projects and Activities With Badges, Awards Or Qualifications For Kids