I recently spent some time in Oslo, Norway, visiting my sister, and found the city to be child-friendly, family-centred and I generally enjoyed being there.

My sister arranged a double buggy for us, so as to keep her own charges in the transport they are accustomed to while also pushing her niece around. From a buggy perspective, Oslo is superbly equipped: the train stations are wheelchair/pushchair accessible, bus drivers lower the buses for ease of access, and while trams are slightly harder, they’re still accessible and the pavements are generally smooth and wide.

There are plenty prams around. Perhaps because of the cold weather, people tend to keep their babies in prams rather than push chairs. The buses have a ‘pram stop’ button to alert the driver that someone with a pram wants to get off (so he can lower the bus). People certainly make way for a double pushchair on public transport.

Babywearing does not seem to be a common practice in Norway, at least not in Oslo. I noticed one other person doing it in the week I was there, and definitely had the occasional strange look. I find that odd, as body heat is surely warmer than blankets?

Ameli, my daughter, has spent some time in 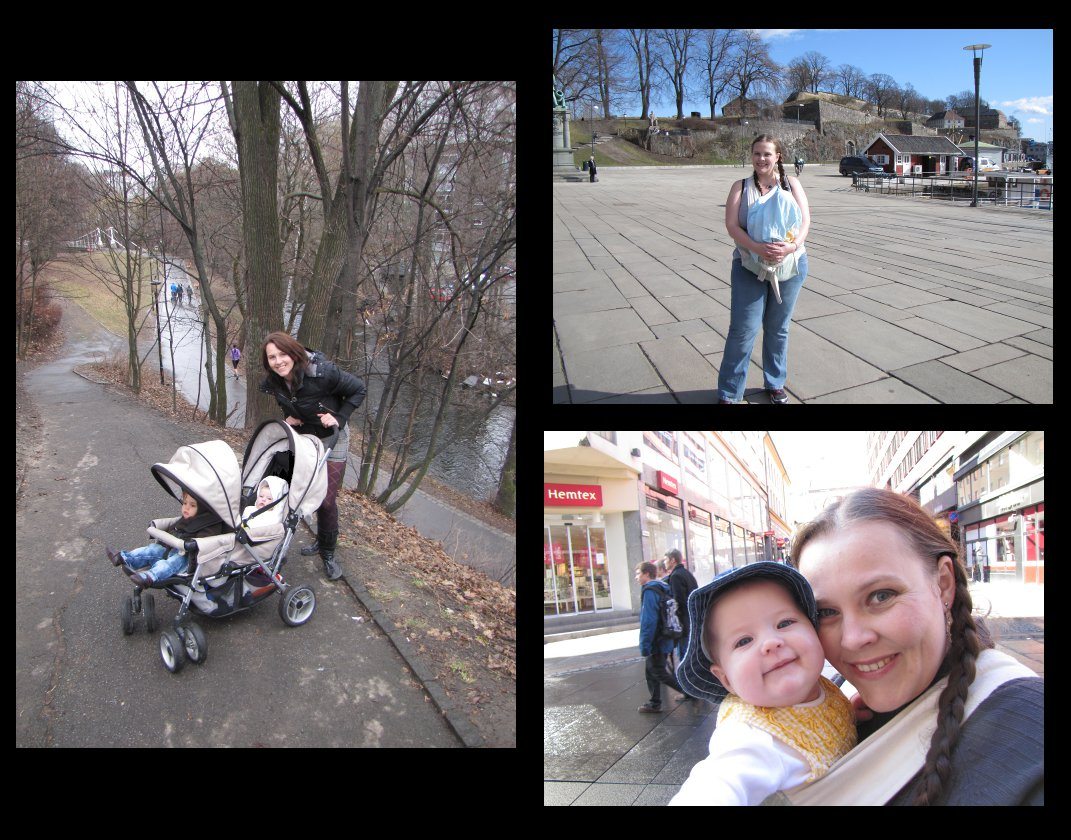 the push chair, but I must admit: I miss her when she’s not in her sling. I miss how she whips from one side to the other as she tries to take everything in. I miss how she interacts with strangers on the street, how she looks into my eyes when she’s uncertain of something, or wants me to know she’s hungry or thirsty or dirty. So I carry her a lot.

Unlike in London, where I’ve not once had to make an entire journey on a bus, train or tube standing while carrying my daughter, in Oslo people don’t give up their seats for baby-wearers despite making way for prams.

Public transport, though, is fantastic. The previously mentioned buses and trams go pretty much everywhere, with frequent stops all over the city. It doesn’t take very long to get anywhere, and the locals (i.e. my sister and her partner) think a six minute wait for a bus is ludicrous, and will rather walk than wait that long.

There isn’t an abundance of public toilets and changing rooms, but saying that, we didn’t have any problems finding one when it was needed. There are plenty of shopping centres and tourist attractions around, and they all have baby-changing facilities. Although there are a few pay-per-use facilities, we always found free alternatives. And if not, we changed nappies on park benches without raising any eyebrows.

I didn’t see anybody else breastfeeding, though to be fair I didn’t notice anyone bottle-feeding either. I breastfed while walking, sitting in public areas and at cafe tables, and although I noticed a few double-takes when I was walking and feeding, I was entirely covered up, so I think people were just surprised at the combination of the two activities.

The general man-on-the-street has a smallish house, from the looks of things, and people do tend to live in high rise blocks of flats, so I am not sure how cloth nappy users would cope here. My sister had a clothes drier over the radiator for our bamboo nappies, but this would be an inconvenience were it a long term situation. And despite the abundance of baby boutiques, not one that we went in to stocked reusable nappies or wraps although a few did say that they were thinking about it.

So far as I can tell, recycling doesn’t seem a particular priority in Norway.

There are quite a few open parks and play ground areas, providing entertainment and running space for the young. There is a large but expensive swimming pool, and Oslo is on the shores of a beautiful fjord, though it was definitely too cold for a splash.

There may not be a zoo or aquarium, but there are many museums, as well as a summertime ski jump and ski simulator. Oslo is also an hour or two from various other tourist attractions that make for great day trips from the city.

I think older children might find themselves a bit bored in this city, but with easily entertainable babies and toddlers, Oslo is definitely a fantastic destination for a cultural break.

Have you been to Oslo? How does your experience compare?

P.S. Here are a few more pictures from my week in Oslo.

Tags: travel traveling with a baby
Categories: Around Europe