I was pregnant for 40 weeks and six days. I knew pretty early on that I was pregnant and had my first scan at 3 weeks. When I saw my little baby on the screen, no bigger or different from my coat button, that became its name, â€œButtonâ€. I didn’t know the sex, but from that moment, I loved my Button.

Or I thought I did.
It was a tough pregnancy. I suffered from Hyperemesis Gravidarum and I suffered from PSD. There were a few days where I was pretty certain I was going to lose my baby. I left a work conference early at three weeks because I was bleeding. Hence the early scan. I bled till almost 20 weeks. I cried every time I went to the bathroom. I loved Button so much already. 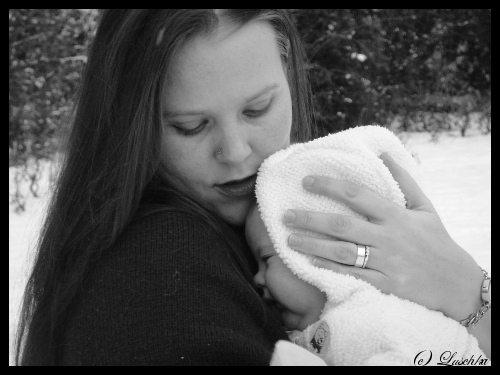 I gave birth 48 hours and 40 minutes after my first contraction woke me. It wasn’t an easy labour but it was a gentle home water birth. I lifted my baby out of the water and raised it to my chest. This little creature looked in my eyes and in that moment a poem formed in my head. A few minutes later I realised I still didn’t know what sex Button was.

She was a girl and she had beautiful blue eyes and was perfect in every way. We lay in the pool as she nursed and I was in love with her. I loved her.

At least I thought I did.

She stayed nameless for almost a week, and eventually we decided on Ameli. Beautiful Ameli, dainty and delicate and fine, like a porcelain doll. (Her name means lady-like in Greek). Someone asked me what I would do if she died and I replied that I would mourn and then life would go on.

Because I thought I loved her â€“ but I had no idea.

In becoming a mother, I feel like I have truly become a woman â€“ that I have found a part of myself I never knew existed, and certainly never knew I was missing.

I know this isn’t something that every woman experiences, and I know that not everyone is cut out for the ‘stay at home’ thing. I know that women sometimes feel pain, fear or shock at not feeling ‘in love’ with their young ones from the start, but I don’ think they should. Sometimes we feel it immediately and sometimes we don’t.

I suspect I felt so much love from the beginning because of the fear of loss â€“ but even so, the ‘love’ I felt in those first moments was only a starting point, as it is for each of us, with the birth of each new baby. It’s a start, a beginning point.

All we can do is to take it from there and let the love, and the bond, grow.

What do you think?