I don’t normally run commentary on news stories, but the story in the Manchester Evening News today really got me (and a lot of other people) a little bit riled up.

A mother of 22 years of age sat on a bus breastfeeding her baby. According to her she was doing so discreetly, but the bus driver insisted she ‘put them away’ or get off the bus. The young lady was still a mile away from home, but chose to get off the bus and walk with her six week old. 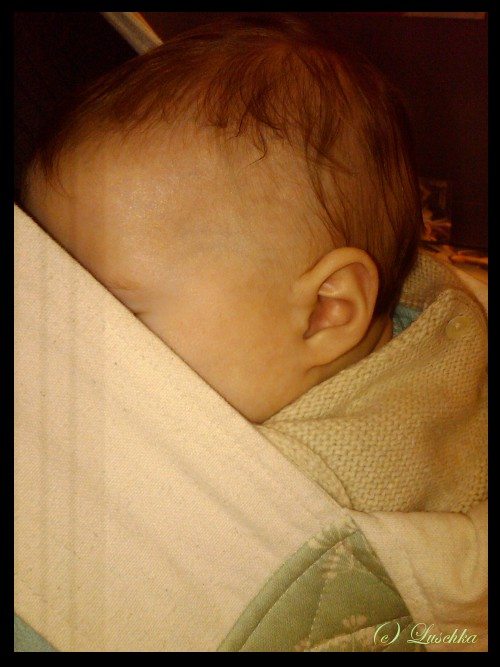 Now, all the benefits of breastfeeding, and the fact that we’ve just waved good bye to the eighteenth annual World Breastfeeding Week aside, it irks me that people are still so ignorant!

As many commenters on the article pointed out, people get away with terribly unruly behaviour on buses, but a breastfeeding mother is turfed out? Unbelievable.

I am not a particular fan in the ‘fire ’em’ philosophy whereby people lose their jobs just because something is public. I would much rather educate; if I were to choose, that bus driver and his customer service colleague would find themselves on a breastfeeding course, a breastfeeding councillors training course, or attending a set amount of La Leche League meetings!

The whole episode did make me think of something I experienced as a new mother though, and it made me smile and feel decidedly blessed.

When my daughter Ameli was two months old, my husband and I spent the day showing my in-laws around London. Ameli was in a sling and slept most of the day and also slept for most of the journey on the bus home.

She woke up about four stops from home, however, and realised that she had been asleep for hours and was hungry. And I mean hungry in that new born way where being hungry now meant she felt as if she’d never eat again and she began to cry.

I tried to shush her, tried to get her to suck on my finger and tried everything I could to distract her, as we were, as I said, only four stops from home, but she was screeching so much that every person on that bus had stopped to look at us.

In a short lull to catch her breath, I looked around me and said ‘sorry about this’ to the bus in general, at which point almost everyone on the full London bus laughed and said it was okay.

Someone from the front asked my mother-in-law why I don’t just ‘feed the baby’, to which she responded that I was still breastfeeding. Another elderly African lady then called back and said, ‘well, go ahead and feed her then!’

We explained that we were off at â€“ by then â€“ the next stop and there was a communal nod of understanding. I ended up walking the rest of the way home in the rain with my two month old under my shirt feeding peacefully, whilst my mother-in-law walked behind me trying to hold my shirt down so that I my middle wasn’t exposed to the December elements.

In retrospect it’s a bit of a funny story, but my feelings about that bus trip are serious: I felt part of a community and I felt as though that community cared about me and the well-being of my child (and their own ear drums!)

The confidence that experience gave me for nursing in public and for continuing breastfeeding was fundamental and I’ll never know who the ladies on that bus were, but I am so grateful to them for that.

And this is why it matters that we get angry when these things happen. This is why we have to defend mothers who breastfeed in public. This is why we have to care about situations where mothers are made to feel bad, are insulted and discriminated against – because it matters. Support matters to them. It makes a difference to them. And hopefully it inspires them to keep doing the best they can for their babies.