Blackmail is a crime. I think we’d all agree with that.

Emotional blackmail is abuse. Again – we all agree.

So why on earth would anyone offer emotionally blackmailing a child as a suitable option/alternative to smacking?

A mother asked on a parenting group the other day what she could do about her very destructive 21 month old. In response she had answers like this: 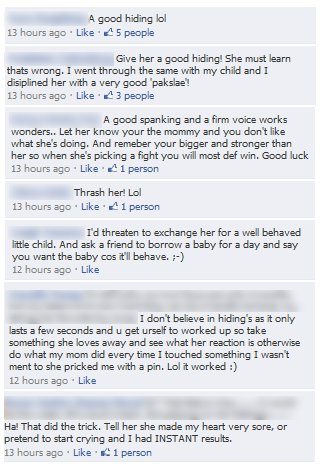 Now, I know that we all sometimes lose our cool. Sometimes frustration and circumstance can get on top of us and the gentlest parent can run out of patience, of simply just make a mistake. But that’s when we’ve failed our ideals. It happens. You apologise and you move on. You don’t start out with manipulation, blackmail and abuse as your foundation! Where on earth do you go to from there?!

I’m sorry, but pricking a child with a pin sounds like abuse to me. Manipulating a child – when we’re told to not let children manipulate us – is wrong. You’re the boss? No, you’re the parent. There’s a difference. Threatening to swap your child with another? Pretending to cry? Abuse, abuse, abuse, whether you can see the scars or not. You’re teaching that child that your love is conditional on their behaviour and I’m sorry, call me judgemental if you want, but I do NOT see how this is acceptable adult behaviour.

One of the commenters said â€œA smack on the bottom or legs has never done a child any harm! Look at society THEN, when a spanking was part n parcel of bringing up kids n our society of NOW/today…where smacking ‘is not allowed’?!?! Compare the societies. Our parents n grandparents could not dare, back chat or swear or spit at their parents, n where a stare alone…made them aware of their naughty behaviour. 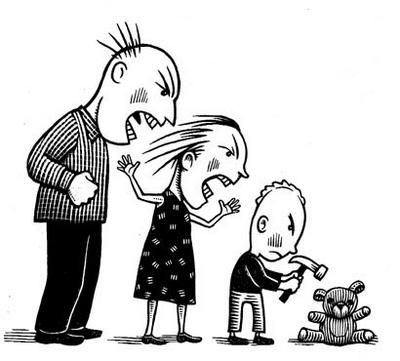 There are so many things in that statement that are inaccurate, in my view. For a start, children today aren’t the problem with society – it’s the ADULTS of today who are the problem – and they were the children that were disciplined with emotional blackmail, threats, and physical violence. Saying lack of a good old fashioned hiding is what’s causing societal destruction is simply narrow minded.

My daughter knows by my stare when she is doing something wrong. She knows when I say – Ameli, look at me - that I’m trying to get her attention, and that she needs to desist what she’s doing. And mostly, she does. And when she doesn’t, we deal with it by removing her from the situation. Of course, this takes greater patience than just walloping a child at the drop of a hat. And no, I’m not talking about beating them  black and blue either, but the truth is, and I know from my own experiences, the only time I’ve ever smacked Ameli has been out of my frustration, my loss of control, and she has learned nothing from it at all.  I am perfectly capable of using a stare alone to point out my awareness of her actions. The smack isn’t needed. The violence achieves nothing positive.

Emotional blackmail comes in such an innocent packaging too. Aw. Why won’t you kiss Aunty Mabel? Don’t you love me? I’m all sad now. Johnny doesn’t want to kiss me. A kiss out of guilt is just not that gratifying, really. If you force an adult to be physically intimate with you, I think they call it sexual harassment, in its worst form, rape. But we can force children?

And it’s an easy thing to slip into. I’ve seen it happen with Ameli. I’ve done it myself. It’s easy to, because lack of respect for our individuality as children is, for the most part, the social norm. It’s what we were brought up with. Our generation, and that of our parents.

How do these two messages equate:

At a 15 year old girl: You don’t have to have sex with a boy to show him you like him.

Somewhere in those 13 years, our message to our children changes. How can it not be confusing to them?

If I want my 15 year old to have respect for herself, to have autonomy over her body, and to know that she never has to do anything she isn’t comfortable with, I have to teach my 2 year old that lesson.

So, that’s an example. Perhaps an over the top one, but my hope is to make you think about the message you are giving your child. And really, Aunty Mabel can wait for that kiss.

We all make mistakes from time to time. Success is measured, in this case, by being aware of what we’re doing, and being aware of the consequences to our children.

“Battered children will batter others, punished children will act punitively, children lied to become liars themselves, protected children learn to be protective, respected children learn to respect others weaker than themselves. “In the short term, corporal punishment may produce obedience. But it is a fact documented by research that in the long term the results are: inability to learn, violence and rage, bullying and cruelty, inability to feel another’s pain, especially that of one’s own children…. unless there are enlightened, or at least helping, witnesses on hand to prevent that development.”

Alice Miller, Ph.D., author of For Your Own Good – Hidden Cruelty in Childrearing And the Roots of Violence.

Time In As An Alternative To Time Out
Blackmail, Violence And Emotional Abuse As Parenting Tools
Love Bombing With A Three Year Old
Why Wont My Toddler Share?