The days go by so fast. I can’t believe so many things: We’ve been back in the UK for two months, you’re twenty months old, all but your nappies have changed from baby to little girl.

Your development is out of this world. I’ve been taking little videos of you almost every day, just to try to keep up. New words enter your vocabulary all the time, and honestly, sometimes you come up with the cutest things. 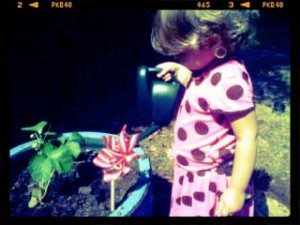 You have really taken to â€˜kith and duddle’ â€“ kiss and cuddle â€“ and never say goodbye without offering those. The month we spent staying at aunty Lindi and Uncle Ian’s was amazing too, because you were just so well behaved. They grew to love you and you’ve missed them since we’ve left. Them, and Hardy and Bella (or Beya, as you call her), their dogs.

I have a bunch of videos I’ve made into little home movies from our time in South Africa, and every single morning, the first thing you want, after your Dhoo-dhoo (milk), is â€˜more Tyra’ â€“ you’re still calling yourself Tyra â€“ the home videos of yourself and your family.Â  It’s amazing how eight weeks later, the use of technology can still keep them alive in your memory.

You’re so full of funnies, it’s impossible to share them all here, like this. I just hope I’ll remember them in time to come. Yesterday, for example, we were lying in bed and you’d finished nursing, I pulled the duvet back up to under my arms â€“ covering my breasts â€“ and you said â€˜kith’ and leaned in to kiss my breast, then â€˜duddle’ and laid your head down in a cuddle.Â  I giggled and said â€˜dhoodhoo is away now’ and you waved and said â€˜night-night dhoodhoo’.Â  It was so cute.

And since, when I’ve said â€˜okay, dhoodhoo finished’, when I know you’ve had enough, you now say â€œdhoodhoo sleepin’â€ which of course, I think is beyond precious.

We found a little play kitchen on the side of the road the other day, and since I haven’t been able to buy you the wooden one I want yet, we took it. You love being in your â€œchichenâ€ and banging around the teaset and lovely wooden play food we got for you.

With moving in this month, we’ve finally actually spent a bit of money on â€˜your room’ since we never had a nursery for you, and I feelÂ  good about the things we’ve spent money on. Playsets, books, and things to make your room a haven for you. I love that within two weeks, you’ve showed signs of migrating into your room for independent play, even if only for 10 or so minutes at a time.Â  I hope that when your new bed arrives, you’ll be ready to move in there, at least for the first part of the evenings.

Speaking of which, all the changes in your life this last month, combined with the really light evenings, haven’t been conducive to your sleeping patterns at all. You wake a few times each evening, and sit on the bed crying till I come in. I lie with you and you go back to sleep for another hour or so, before waking again. It’s not great, but I accept that it’s part of the continuous cycle of growing/sleeping/teething/change that we’ve made a part of our lives.Â  At least once I’m in bed you seem to settle, and we sleep pretty well till the early hours.

Then I normally wake to â€˜more Tyra’ or you jabbering on about a fly on the wall, or similar.Â  At least waking next to you is always a joy. You’re exceedingly beautiful, and happy, and remove any chance for a grumpy awakening.

I’ve been trying to introduce you to theÂ  concept of â€˜baby’ since we’ve had newborns around us a lot the last few weeks. It’s been amusing actually â€“ I was holding our friend Sinead’s 8 week old, when you came running up to me saying â€œBaby dhoodhoo?!â€ I showed you that no, baby wasn’t having your dhoodhoo and once satisfied, you ran off again. I guess that’s something we’ll have a few months to work on. Conception doesn’t seem to be quick for us though, so it might be a while still.Â  Time will tell.

Another wonderful new word you’ve learned is â€˜bishishle’. We have this Smart Trike thing for you, and you love it. It’s good for me too, since I have to take you for walks in it, but you like pushing it around with your own babies in.Â  You’re so excited by it though. And when you see anyone else on a bike, you point out and yell, â€œbishishleâ€. It’s really sweet.

Apart from just single words though, is the fact that you actually now use sentences, and can make us understand your wants and needs, which has made parenting so much easier.Â  For example, if you hit your head orÂ  bump your toe, you’ll cry, come to where myself or daddy are and lift the sore body part towards us saying â€˜kissÂ  betta’ . OrÂ  if you’re still hungry, you’ll say â€˜Tyra want more food’.Â  If you’ve lost something – like the Lego motorbike you aren’t supposed to play with – you’ll say ‘Ameli look bike’. That’s pretty good going for someone your size, I think.

The Winnie the Pooh love goes on, and you’re just loving the Audiobooks and actually â€˜talk along’ to some parts of it now. There’s a line where Winnie and his friends are trying to get Eeyore out the water, so they throw rocks next to him, hoping the wave will carry him to shore. You say along with Rabbit, â€œOne, Two, NOW!â€Â  You took it a step further though and turned it into your own game, so you’ll randomly walk around going â€˜One, Two, Nanna. One, Two, Oupa. One, Two Aunty Deeeeee. One, Two, Mone (Morne). One, Two, Din. (Dyllan). One, Two, Daddy.â€ And so on. It’s an odd game, but you seem to like it.

There are so many little anecdotes I can share with you, but I guess you’ll just have to watch the videos some day.

I’m looking forward to the month ahead as we settle into our home, and sculpt out a new, more settled â€˜family life’ for ourselves.Â  I look forward to watching you grow, and to seeing how life changes you way too quickly from toddler to child.