It’s that time of the year again â€“ National Breastfeeding Awareness Week. Although, this year, the government have removed funding for it, meaning the 14p they used to spend on each baby in the UK â€˜advertising’ breastfeeding (instead of the Â£20 spent by formula companies) is reduced to, well, nothing.

Fortunately, those of us who believe in breastfeeding and the benefits it holds for both mother and baby, understand how it works, and are constantly amazed at the additional properties and unknown qualities of it, believe in it enough to still honour Breastfeeding Awareness Week, even without the government’s help. 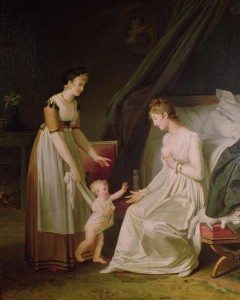 So why is National Breastfeeding Week so important?

Because we need to challenge the perceptions of the majority of people in this country. We need to see breastfeeding return to being the norm, and to help those mothers who want to breastfeed receive the support they need.

Quoting myself from a previous post on why we need awareness weeks, I read an article recently on the subject. The topic was for children’s mental health week, but the message remains the same:

â€œThat’s why we need â€¦awareness week.Â  We need toÂ educate people about what works to displace what they â€œthinkâ€ they know.Â  We need toÂ call them on their ignorance and replace their beliefs with new ones.â€ Â – Lisa Lambert, PPAL

Unfortunately there is so much misinformation and myth surrounding breastfeeding, from the women who believe their breasts are too small to the ones who incorrectly believe they weren’t making enough milk to the ones who were simply tricked, conned or failed by the people they turned to for support, that every opportunity has to be taken to stem the tide, and turn us back towards a culture of nurturing our babies with mother’s milk.

And you just have to look around you at any play group, shopping centre or nursery to see that it is a tide indeed, and it’s one that those who support breastfeeding are largely drowned out against â€“ not least because there isn’t the money to support breastfeeding in the way that there is for formula, but also because of the attitudes prevalent all over.

As a breastfeeding mama, you are immediately on the back foot in almost any conversation, usually â€“ saying a single good thing about breastfeeding often is automatically assumed to mean you’re judging other mothers. For most lactivists, that’s not the case. A mother’s choice for infant feeding is her right â€“ so long as it is her choice, with the correct information at hand, and not the result of boobytraps, misleading headlines, or lack of support.

And that’s why we have and need breastfeeding awareness week. Â To give women real choice.