It’s taken me almost as long to come up with a title for this post as it has to write it.Â  â€œWhen government agencies steal babiesâ€? Too X-Files. â€œChild Abduction At The Hands of Authoritiesâ€?Â  Too sweeping. Â â€œWhat about Habibaâ€? Too vague.

This is the story:

A woman, Habiba, fled Morocco to Madrid, Spain, to bring herself and her daughter away from an abusive husband. After presumably living rough, she was taken into a shelter for women and children where part of the â€˜treatment’ is that they have to take medication to dry up their breastmilk, because â€œbreastfeeding is considered â€œchaoticâ€ and â€œdamagingâ€ and also because it will make more difficult putting the child for adoption if this need arises.â€ So, the shelter decided to remove the 15 month old child from her mother. Â Then they kicked her back out on the street, since it was a shelter for mothers and children, and she no longer has a child. She has been allowed a one hour visitation with her child since, during which the baby rooted for her breast, at which the shelter representative yelled at her, scaring the child. Her little girl, Alma, is being kept in an orphanage or similar, with 42 babies aged 0 â€“ 6 months , cared for by 2 carers (at night â€“ there’s no daytime number given).

This â€“ I don’t want to use the word â€˜story’ because it’s not a story. It’s a nightmare â€“ has been on my mind since I heard it. I can’t imagine the horror of it.

Somewhere in this world, a little girl is sitting, probably in a cot, surrounded by 41 babies, all unloved, uncared for, not nurtured â€“ it doesn’t matter who those carers are, they cannot give fourty-two children the love and affection they need.

This little girl isn’t a baby, either. She’s a fifteen month old. Probably saying her first words. Probably lies in bed playing little games with her mama. Gives her kisses and cuddles. This is a fifteen month old, who has a smile that lights up her face â€“ and melts her mother’s heart. A child who knows her mothers’ voice, touch and breast. She walks next to her, holding her hand. This mother wanted to do what was best for her child. Despite her own surroundings and situation she made a brave move to find a better life for her child. 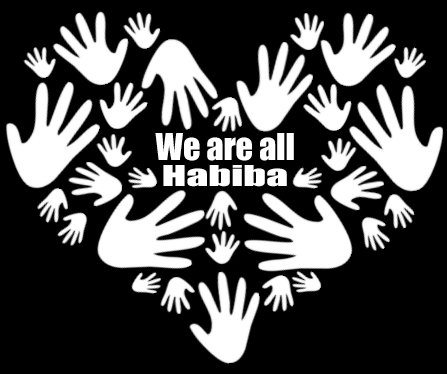 I wonder how good her Spanish is. Or how good their Moroccan is. I wonder if they explained to her that they were going to take her child away if she refused to stop nursing. I wonder if they told her she could keep nursing and leave, or stop nursing and stay. I adore my nursing relationship with my daughter, but heaven knows, if I was going to have her removed for doing so, I would stop right now.Â  WhatÂ  mother wouldn’t. So what? They took her, with no explanation? Did they tear her from her mother’s arms? No. They took her from the day care centre provided by the shelter. Habiba wasn’t given the opportunity to say goodbye.Â  Alma had no idea what was going on.

At their most recent meeting, Alma didn’t even want to look at her mother. She had lost weight and had rings around her eyes.Â  According to Dr. Ibone Olza who brought this case to international audiences, this is to be expected as this poor little girl is suffering from deep abandonment trauma â€“ it doesn’t take a brain surgeon to figure that out. Removed without warning, abandoned.

Initially they didn’t tell her where they had taken Alma. She was alone, homeless, childless, and had no idea where to go. This is cruelty. It is an abasement of human rights.

â€œwithout following any legal procedure, without allowing her to say bye to her daughter and without communicating to her where were they taking her baby.â€

There’s another point to this story that struck me:Â  Shelters in Madrid (Spain as a whole?) don’t allow breastfeeding â€œbecause it will make more difficult putting the child for adoption if this need arisesâ€. I would love to see a report or some research on how many mothers have been forced to give their babies up. I’d love to know how many of those have been legitimate adoptions.

Here’s a beautiful video of a group who gather outside the institution every evening to sing lullabies to Alma.

There’s also a list of people to write to and things you can do, here

My 20-month old is sitting on the sofa next to me, pressing the buttons on her musical telephone and saying â€˜hello’ into the receiver. She looks over at me with a big smile and says â€˜dhoo-dhoo?’ (her word for milk). She curls herself up under a blanket and says, “Mummy, Ameli nice warm” and my eyes well up with tears for a little girl sitting in a room somewhere, calling out for her mama, who isn’t allowed to answer.