Mozambique really floored me. I left there, and shed a tear. I shed a tear for a place I had spent less than a week in and even now a week later, I find it difficult to really capture what I felt there.

Over the next few days we travelled back through South Africa, then up to Botswana. We only spent a night in Botswana, so there’s not much I can tell you about it, other than that Botswana has been an independent country for many years, it’s economy does better than South Africa’s and that it is another place where rampant development is occurring. The roads are in a better condition than those of most of rural South Africa, but there is nothing there. Villages are few and very far between, and the country is sorely under populated, and under cultivated â€“ but saying that, much of it lies in the Kalahari desert, so not much cultivation is possible. 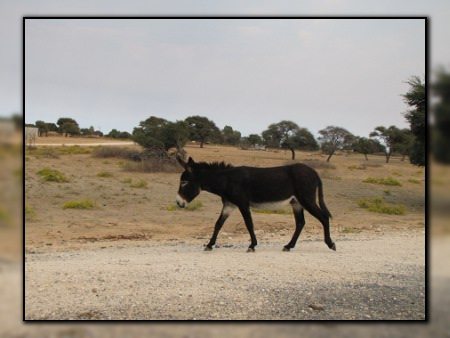 There’s an abundance of donkeys. I kid you not. I’ve never seen such a high concentration of donkeysÂ  anywhere in the world before. They line the roadside all along the southern part of Botswana. It’s incredible. I know that sounds like a really random fact to share, and I wouldn’t ordinarily, but seriouslyâ€¦ so many donkeys.

We saw a few wild ostriches too, along the road, but only two pairs. Nothing like the donkeys.

Upon arrival in Namibia, we crossed the border on the Eastern side of Namibia, and aimed for Gobabis, where we spent a night in a lodge.Â  The next day we drove around 600km, a very long stretch, and as we headed north the temperatures started climbing.

We lived in Namibia, then South West Africa, when I was a child, leaving just before my 10th birthday, and Namibia, or S.W.A, is one of those places that I always treasure. It’s dry, barren, under populated (in the South, anyway), dusty, sandy and hot, hot, hot, but there’s something about it. The brown becomes beautiful.Â  It becomes a part of you. At least, it did for me, when I lived here, and whenever I return (this is my 3rd return in the last 22 years) I feel as if I’m coming home.

In Namibia, the towns are incredibly far apart, and there are few, if any motor services along the way.Â  It’s not unusual to find over 100 miles between towns and apart from maybe the odd farm house, there’s nothing else along the way.Â  For much of the way, the road is flat, and when you do come upon a slight rise in the road, you can see for miles upon miles ahead of you. Nothing but bush, and straight road.

There’s a fair bit of wildlife along the route. Birds of prey, guinea fowls, ground plovers. Warthogs, cattle, the odd giraffe or deer.Â  Occasionally a car passes us or comes from in front. This land is so empty. It amazes me.

We finally left the road, and travelled a short distance on a gravel and then sand road, to Camp Setenghi, where we are staying for about ten days. It’s a resort/mission base owned by friends of my parents, and obviously we’ll have more to do with the community work they do than normal visitors to the resort do. The regular tourists are out on game drives and touristy business during the day. We’re going to be lending a hand with their community projects â€“ like talking to local youngsters about safe sex, or attending the rural clinics to teach on nutrition and health (my mother was a community health practitioner for many years).

I’ll tell you more about that as it unfolds. Camp Setenghi only has electricity for four or so hours a day, and during that time it has internet too, so my time online is limited, but my time off-line is uncharacteristically rich, valuable and oddly freeing.

Pic Of The Week – Week 31
Mozambique – A Window To Another World
Settling In, Settling Down
Things To Do In Pretoria, South Africa