We’ve been so busy recently, and this particular week really topped it off, what with two trips to London in amidst the rest of it all.

Our first visit was to meet with the team from gNappies who came over from the US to visit as gNappies are being properly launched in the UK. I reviewed them about a year ago, and have been using gNappies, and love them, so I was excited to meet the team.

We met the ladies in the first picture:Â Kim Graham-Nye,Â Michelle Carver Schnoor,Â Jolynn Mitchell (who we didn’t meet)Â andÂ Kelli McKee, and they were just so lovely, I kind of wished I could join their team just so I could talk to them every day. They also took so well to Ameli, she was completely at ease with them all.

The second picture is one of Michael from Baby Naturals – sharing a concoction of late foam and water, and a little bit of Rooibos tea from Ameli’s sippy cup with her.

Next is Michelle, a fellow Hyperemesis Sufferer, it turns out with Ameli and her now infamous ‘cheese face’ and myself.

And the main picture is one that’s really special to me: Ameli was drawing on some paper when this little girl arrived, and whereas she’s normally really possessive and not at all keen on sharing, she walked over to this girl, gave her the paper and some pens and said ‘Do you want to draw?’ They promptly lay down together and drew for probably half an hour. It was so sweet and I felt really proud of her! 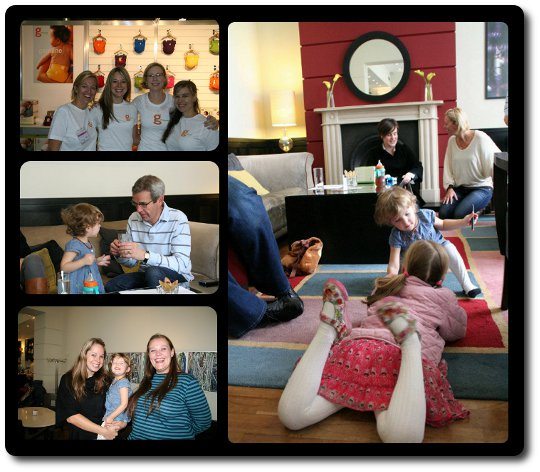 The next trip to London was two days later – we went to a Fisher Price Play Party, which was great fun, if a little frightening for me (I’m not a fan of noisy toys, and I’m clearly in the minority as Ameli walked in there and disappeared, surfacing only when she saw me eating a snack and decided she wanted some herself.

In the pictures below are Hayley fromÂ Simply Hayley who kindly gave me some pregnancy fitness DVD’s that I’ve been diligently staring at, threatening to pop them in the actual DVD player some time soon, and the super sweet and suffering from bump envy Pippa from A Mother’s Ramblings. (Pippa was the first ever person who came up to me saying â€œAre you Luschka from Diary of a First Child?â€ When I said yes she said she was star struck and didn’t know what to say. That makes me laugh whenever I see her â€“ considering she’s won repeated awards on her blog since, and I feel the tables have somewhat turned. She’s blogebrity now.)
P.S. You can actually seeÂ I’m pregnant now, right? Not just fat anymore!

Bottom left is Ameli engrossed in something, finally having torn herself away from the Mickey Mouse dancing toy that she refused to let anyone else play with for most of the day!

Bottom right is Dr Deborah Weber who explained some of the work, research and study that goes into creating toys for the Fisher Price brand. She showed us images of their research centre â€“ seriously the coolest playgroup ever. 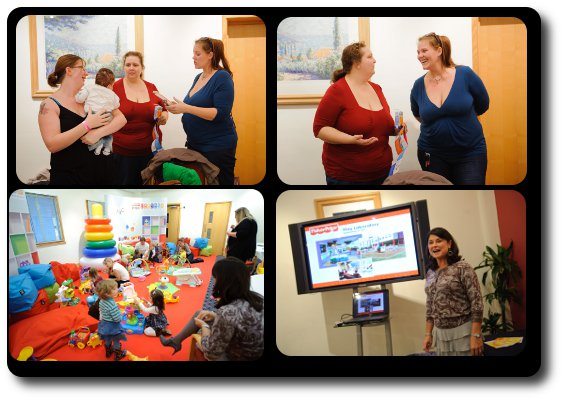 Thanks for joining us for our pic(s) of the week!