Pineapples and Artichokes is a warm and loving blog, written by Shannon, mother to Moira and Davis. Shannon writes in very much the way I tend to think: with a steady stream of consciousness and deep introspection. She turns it into a narrative of her children though, and is – to my mind at least – an incredibly conscious mother and very present in her own life.

I absolutely respect and admire how Shannon handles things with her daughter. For example, when Moira was struggling with dealing with her emotions, Shannon drew a happy and sad face and they made a list of things that made her (Moira) one or the other. I thought it was an ingenious way of exploring emotions.

Shannon posts a lot of photos and pictures of her family and their life. It’s a visual representation of a mother’s dedication to her home and her people, and it’s always beautiful. She’s also incredibly crafty and sews quilts and clothes. I envy people who have the patience to sew – I learned how, but can’t be bothered with it. I glued my advent calendar together in December because I got fed up with tiny stiches! 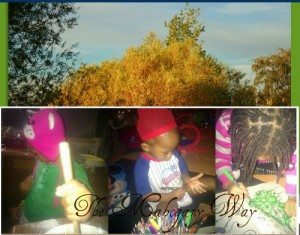 Shannon also blogs at Food & Laughter where she shares some of her fabulous recipes.

If you ever want wholesomeness on paper (or on screen, in this case), Pineapples and Artichokes will leave you feeling… just… good. And a little happier, in your soul.

Another blog bursting at the seams with beautiful, wholesome family life, is The Mahogany Way. Written by Darcel, her home life is depicted charmingly in her blog.

Aside from being an awesome Mama though, Darcel is a passionate breastfeeder – which is how I discovered her in the first place – and shares her own breastfeeding journey with her four children.

In the post ‘Freedom’, Darcel writes something that really resonated with me – not in a ‘yes, me too’ way, sadly, but rather in an ‘I yearn for that’ way – she writes about the changes in herself and her views on parenting over the last five years and how she used to believe that she could shape her children into who she felt they ought to be:

Now I clearly see that it’s a waste of time and energy to even think that way. I’m proud to say that my kids are free to be kids….free to be themselves. I’ve learned not to hush them when they cry, or tell them how to feel, or what to think.

In this house you’re free to simply be.

I think that’s beautiful, and I’m so conscious of the words I use with Ameli, and more importantly, the ones she repeats back to me. (She has a habit of telling me that she’s a good girl. “You’re a big girl now.” “No, I’m a good girl!” or “Mama’s a bit sad today”,  “Ameli make mama happy?” How do you explain, “No darling… happiness comes from inside, no one else can make you happy” to a two year old? And why does she feel the need to be ‘good’ or to make me happy??)

It’s not all sunshine though. Darcel has dealt with her share of depression – particularly the post-partum kind – and while I love her posts on pretty much everything, it’s the honesty in her writing about depression that deeply touches me. I never had so much as the 3rd day blues with Ameli, but due to sickness in both pregnancies I’ve had my own share of pre-partum depression – if that’s the right term?  Darcel’s openness is refreshing and valuable and I’m sure means a lot to mothers who also find themselves yelling at their 9 week olds will find solace and hope in her words.

Both bloggers make me want to pour a cuppa, put my feet up, read a while, and then go away and cuddle my baby.