I have a massive amount of respect for Annie, from PHD in Parenting. She’s an incredible activist and a parenting â€œguruâ€ I’m actually willing to listen to, because for a start, she actually has children. I very nearly met her in Germany last year and I’m still disappointed that we didn’t make it to Berlin in time to do so â€“ but I digress.

Annie wrote a very interesting guest post for ProActive Dads titled If Dads Are Irrelevant Moms Are To Blame, which is my Friday Favourite this week.

e a big problem with the portrayal of dads and men in the media sometimes. It’s a little bit chicken and egg, really â€“ do dads act up (or down) to what they see on TV, or are TV men real representations of men today? Personally, I can honestly say that I don’t know a single man over 25 who acts like, say Raymond, from Everybody Loves Raymond. Now, maybe I’m lucky, but really?Â  If men are so spineless, lame and stupid, is it no wonder the world is in something of a shambles!

While I think Friends was one of the best series ever written, I’m never going to want to marry Joey. Or Chandler. Or, heaven forbid, Ross. What role models are these characters? And why are men shown to be such brain dead oafs? (Okay, Chandler really manned up towards the end, but still.)

Then, another in my top two of the world’s best series ever â€“ The West Wing. Great men. Good characters. Fantastic role models: who work night and day and have absolutely no family life worth speaking of. Their children wouldn’t know them. 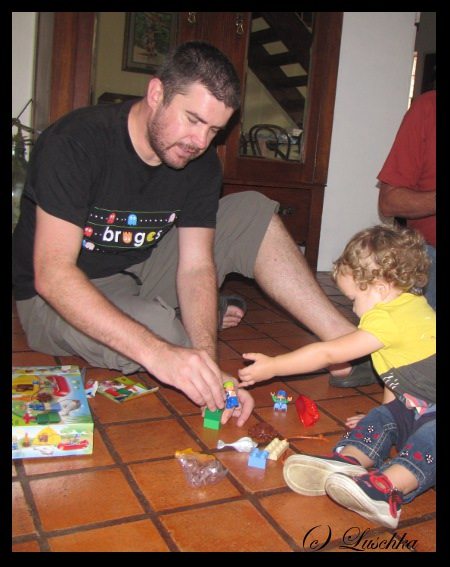 Is this REALLY men today? Is this fatherhood today?

Is it feminism that castrated men? Has our quest for equalityÂ  actually damaged both sexes? Because the ying and the yang of the matter is this: Without men being men, women can’t be women. Without women being women, men can’t be men.

Now don’t rain a hailstorm down on me. I’m not talking barefoot, pregnant and in the kitchen, ladies. But to have true balance, we must surely all be playing our parts right, whatever those parts are? And fortunately that’s not something that has to happen at a global level, like, say, removing the right to vote. But it does need to happen in our own homes and in our own relationships.

And our children need it. Not only do they need it, but they deserve it. I wrote, some time ago, asking if girls really need to be daddy’s princess? And while the terminology might annoy some, there are psychological and emotional prices to pay when men (and women) aren’t the role models their children need.

So, I ask again â€“ are men like the TV characters we see, or are TV and social stereotyping breaking down men, undermining them, and destroying all confidence in their own ability to lead with love, guide with conviction and simply, be good fathers and good men?

Have you read anything good this week? Written anything you think needs a few readers? Link up here: