Preparing for a homebirth is one thing, but preparing your older child for a homebirth has been a whole different adventure. I think how much you’re able to prepare them depends massively on the child’s age, and while I have no evidence of this, I suspect the younger they are, the more ‘easily’ they’ll just ‘go with it’.

We’ve been reading books and practicing mooing and making groany noises together so that Ameli knows what mama might do when the baby comes. With her birth there was no crying or screaming, it was actually very calm and gentle. I’m hoping for the same again this time.

As with any birth, our preparation will only take us so far, then it’s up to nature and a little bit of luck to take you the rest of the way. It’s no different with preparing a child for a birth, whether it’s a home birth or hospital birth. Having never been through it before, we have no idea how Ameli will react, whether she’ll be in any way interested, or will in fact even be awake!

But on the hope that she’ll be there and understand what’s going on, we’ve been watching birth videos together, for preparation.

Below are the best we’ve found. I’ve specifically chosen videos that aren’t overly graphic, and are relatively short – while the lead up and pregnancy pictures and all that make for a beautiful dedication, they don’t really captivate a two year old! I’ve also gone for gentle and calm births. There were some amazing ones with lots of screaming. She found them disconcerting, and I didn’t feel they were contributing to the positive preparation we were  hoping for. 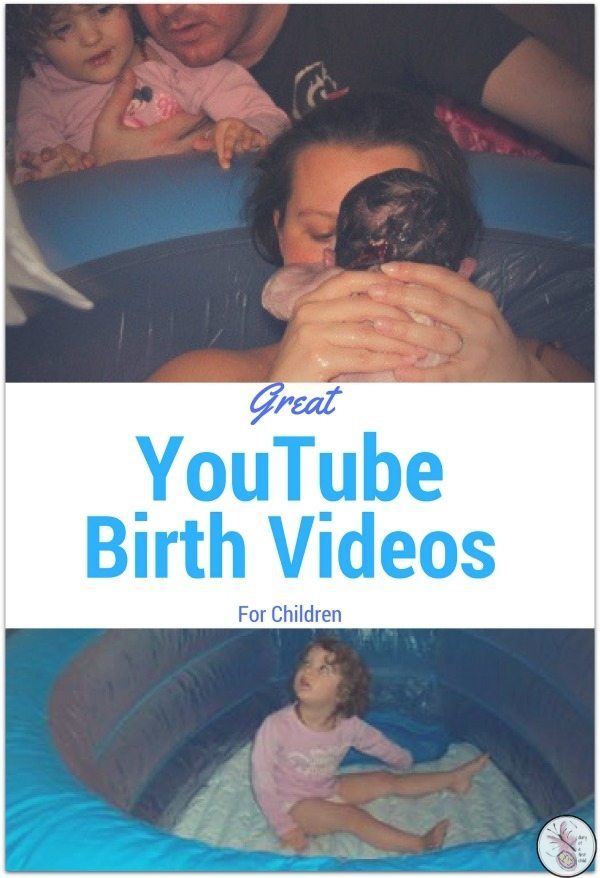 If you’ve found a video that you thought was particularly useful and you’d like to point me to it, drop it in the comments and I’ll see if it fits!

This is an unassisted birth at home in the bath. Mama doesn’t make a sound the whole way through!

Another in the bath at home. Another really quiet mama! Birth happens about a minute in.

Here the mother labours in a birthpool and it is probably closer to our setup. Mama rocks up and down in the pool while holding her belly through the contractions and there’s some heavy breathing. This is useful for explaining the way you’ll be breathing (i.e. golden thread breathing) and to ‘practice’ it together with your child/ren.  (For the record, I don’t think her breathing would be ideal for me – it’s too panty, but it obviously worked for her.)

While we’re not planning a land birth, there’s no harm in preparing Ameli for it too. Also, they’re a bit for explanatory of where the baby comes from, since they show a little more. These are still not very graphic.

Quite explicit and straight on, but I still thought this one was tastefully done in a way that was child friendly to watch too.

Here’s a mix of different births, but with older siblings present. I found these really useful for comparisons. “See how the boy stands next to the pool and doesn’t try to climb in? Ameli mustn’t climb in either when mama’s having the baby.” And so on.

This clip has the nine year old sister aiding in the delivery of the baby, along with the midwife. It’s good though as it shows the baby coming out without actually showing any gory bits.

There’s about a minute of pregnancy pictures here, then a few seconds of labour pictures – birth ball use and so on. This video is good as it involves a bit of groaning and ‘noise’ but nothing ‘violent’ or frightening.  The boy gives his mama cuddles and kisses and generally ‘hangs around’. It’s a beautiful and gentle birth and Ameli copies the lady’s ‘ooh,ooh’s’.

A longer video that has the older brother in the tub with mama for much of the labour. This was a good clip for me to watch too, as I’ve been concerned about being able to focus in with Ameli around, but if this mama can do it, then it obviously can be done! Birth happens around 7 minutes with a realistic amount of panting and groaning and moaning.

And of course, no birth viewing session would be complete without the picture slideshow of Ameli’s own birth. This one has the lead up of labour, including the birth ball, gas and air for a while, and labouring in water.  Birth occurs around 2:20.

Books To Help Prepare Siblings For The Arrival Of A New Baby
Activity Pack Ideas For Older Siblings At A Birth
Birth Story of Squidgy – 13 March 2012
Pushing During Childbirth – Spontaneous Or Directed?