When Ameli was a baby I wrote many articles on breastfeeding and its benefits. I wrote about things I wish I’d known about breastfeeding, and some relatively unknown things about breast milk, and how breast milk is made. I’ve shared my confessions of an extended breastfeeder and I’ve written about the highs and lows of breastfeeding during pregnancy. My last post about breastfeeding was on nursing a toddler during the final stage of pregnancy, so it’s only logical that my next series of posts will be on that thing that is the art of tandem nursing.

I’ve been asked a number of times by various people whether it is possible to nurse both babies at the same time, and the simple answer is yes! I know the concept is foreign to many people, so here are nine reasons why tandem breastfeeding is worth considering. 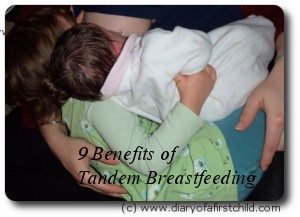 This was one of the most beautiful and surprising parts of tandem breastfeeding, for me. The first time I lay my nursling on top of my toddler to allow them to feed together, and my beautiful big girl put her arm around her sister to keep her from ‘falling off’. I think my heart melted in that moment. We’ve had absolutely no jealousy since the birth of our second little girl twelve weeks ago and I am convinced that breastfeeding both children has something to do with it.  Unfortunately there doesn’t seem to be any studies on this subject yet, but there’s plenty of anecdotal evidence, and I’m happy to be adding to that.

Regardless of what you do to prepare a toddler for a new baby, the reality of the new addition is beyond anything they’d have expected, and having something that bonds them together from the beginning is very helpful. It’s also something they can do together.  The first question Ameli asked, while Aviya was still in the birthpool, was, “can it walk?”  She is very aware of the fact that Aviya can’t talk to us and can’t play with her. In fact, as Ameli’s book says, “it’s basically a lump of clay.” Having something they can do together definitely creates a bond from early on.

2. Valuable lesson in sharing and consideration

Sharing breastfeeding is an incredible lesson in sharing in general. This is another area my Ameli has surprised me: she understands that the baby, who cannot eat food yet, needs to have milk more than she does. It’s not always easy for her to have to stop feeding when it’s Aviya’s turn (tandem nursing can mean two simultaneously, or one after the other. We do both.) but she usually does. You can see sometimes that she doesn’t really want to, but she does. I think it’s a great lesson for life.

3. All the benefits of newborn milk

Newborn breastmilk is full of so many good things, and the mother’s body adjusts the milk to meet the newborn’s needs. That means the toddler is getting all the benefits of baby milk, all over again.

Now, this is purely anecdotal, from my own experience, but in our case, my milk came in pretty much immediately after Aviya was born. There was still colostrum, as I could tell from Ameli’s nappies, but she had milk available on tap from the start. This meant that she didn’t have to work very hard to fill her tummy, which meant she fed for shorter periods of time than newborns normally do. It also meant that she slept for longer than newborns normally do. In fact, she fed so little and slept so much that she lost 11% of her body weight in the first week, but more than made up for it subsequently (she’s currently in 4-6 month clothes, and is only 2.5 months!) The fact is that she didn’t have to burn much energy in an attempt to consume.

Because I had milk and nursed all the way through the pregnancy, bar a few days here and there, milk was just ‘there’ from the start and I haven’t had any issues with supply at all, not even during the six week ‘drying up’ that most people experience as milk goes from reservoired to supply and demand.

3. Familiarity with the older sibling

It’s easy to very quickly fall into the habit of saying ‘don’t touch the baby’, ‘leave the baby’, ‘be gentle with the baby’ and any one of a million variations on that theme. We’ve tried very consciously not to plant the idea that ‘sister’ isn’t to be engaged with in Ameli, and have instead decided to accept that babies aren’t actually as fragile as we tend to think they are when you have your first born. Tandem nursing is a way of introducing an older sibling into a baby’s space, so that the younger can become accustomed to the sound and smell of his or her older sibling too.

Sometimes the flow of milk can be so strong and forceful that the new baby can gag and choke. Getting big sister or brother to take the edge off, can be really helpful. It’s worth remembering the difference between foremilk and hindmilk and making sure baby is getting enough of both, especially in hot weather.

Believe it or not, tandem breastfeeding has a number of benefits for mama too.

If you’ve had a toddler let loose on your house for any length of time, you’ll know what devastation can be wrought in the shortest of times. Nursing both together means you actually get to have a break without having to directively engage, occupy or entertain a toddler. This is where a hands free water bottle with a straw comes in though, because it can be hard to hold a cup while nursing two children!

All those things that hit the headlines from time to time? Those. Reduced risk of breast cancer being the biggest one.  And some people put weight loss in this category. Breastfeeding gives me a sweet tooth, so no, I don’t lose any weight!

Despite popular belief, when your milk comes in proper, you can still get really engorged, even if you’ve been breastfeeding through pregnancy. I haven’ t had to express once this time round, nor have I had any problems, such as mastitis or clogged ducts, because when I’ve needed to, I’ve been able to call on Ameli – even in the middle of the night, since Aviya sleeps through – to quickly and effortlessly drain an engorged, painful, leaking breast.

So there you have nine reasons to at least consider tandem nursing. It’s not always easy, and there are days where I wish more than anything that Ameli would wean, but looking at the list above, the benefits are fantastic, and this is a phase in our mother and daughter(s) journey that I will always look back on with a distinct sense of pride in all of us.