I have really mixed feelings about this year’s Festival. We were really looking forward to it because we had such a good time last year that now with Ameli a little older, we were really excited about her enjoyment of it.

On arrival there were no queues walking in, and we set to having a walk through, deciding what we wanted to see and basically just getting ready for the day. Very soon after we arrived, however, it became crazy busy. 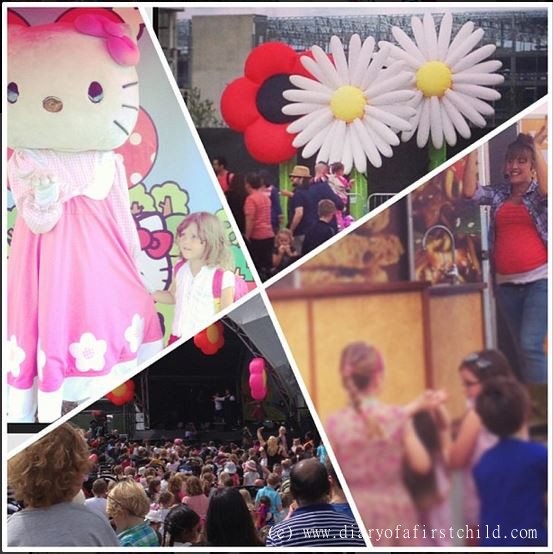 Ameli had really wanted to see Peppa Pig, Cloud Babies, Hello Kitty, and most of all, Katie (I Can Cook). We made a beeline for where Katie was performing, and Ameli ran off to the front of the stage where she could almost touch Katie. My husband and I stood far at the back craning our necks to try to keep an eye on her, while also watching Katie.

While I totally understand that she wasn’t able to do a cooking show as a live performance, we were a bit disappointed, but what she did she did amazingly well. Considering at her stage of pregnancy I could barely walk up the stairs, her energy was amazing, and she engaged the children, and the dads she got on stage, fantastically. We had a good laugh, and we did enjoy it.

There was a meet and greet with Katie after the show, but the queue was so long, I was pretty doubtful that we were going to get to see her and I wasn’t interested in queueing up for nothing, so we didn’t actually get to meet Katie, but Ameli loved the show and announced that she wanted to watch the next one too (we didn’t, in the end.) 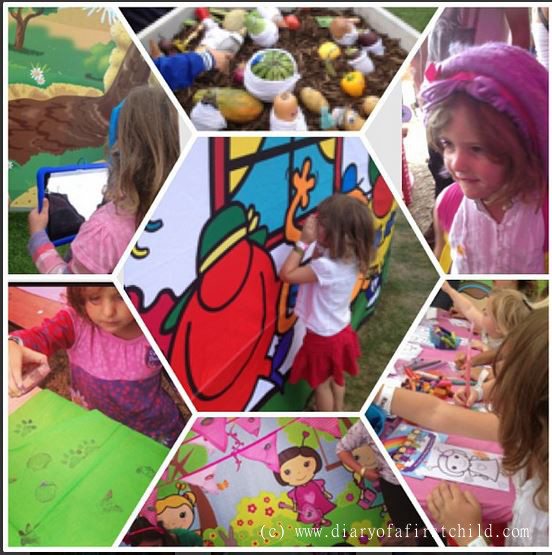 We walked around then, looking at the different activities. We loved the Science Museum tent, which wasn’t too busy, and we really enjoyed the National Geographic tent, which again wasn’t exactly heaving. Then we started walking around looking for something to do. It struck us that whereas last year there had been so many things for the children to do, this year there weren’t any of those things (The Halford’s drive school, Haribo games tent, village with dress up rooms and role play rooms) and what was there just either had incredibly long queues or was just for buying purposes.

By the end of the day, Ameli had seen Katie, and had started watching Justin Fletcher (Justin’s House, Mr.Tumble etc) but had become bored as we were so far away, she couldn’t really keep up with it. We did catch a bit of Sid and Andy, which she enjoyed, but somehow we totally missed both Peppa Pig and the Cloud Babies.

While we felt there was more to buy than do this year, we did do some silk stamping, and coloured a picture to post to the fairies, which I think salvaged the day for her. She also decorated a cupcake, and Aviya had a bit of a play at the Baby Annabel stand. The girls briefly played with the WOW toys, but again, while they’re playing we were just standing around – some coffee tables dotted around wouldn’t have hurt anyone.

The best part of the day, for us, happened in the National Geographic tent, where my husband and I were browsing around the magazines, and next thing we heard the presenter in the tent ask a child her name. The child, ours, answered, and he asked what her joke was. Now, Ameli doesn’t really ‘get’ jokes at the moment, so hubby and I looked at each other in a bit of horror. Their exchange went something like this:

Presenter: Who have you seen today then?

Presenter: Oh, and did they say hello?

Ameli, looking sad: They weren’t there?

Presenter: So, you haven’t seen them yet?

Presenter, looking at the audience, confused: Okay. Well, hopefully you will later.

Presenter: Are you married?

Presenter: looking at audience confused, again: What did I ask?

So, what’s your joke?

Ameli: Why did the perwhit not jump? (no, we don’t know what a perwhit is either!)

Ameli: Cause it doesn’t have any feet! (giggles to herself, hubby and me crying with laughter)

Good on him for rolling with it, Martin and I were in tears of laughter, Ameli thought she did great, and she got a sticker out of it too.

We didn’t do facepainting, or designing a t-shirt, or even go into the Duplo play area, and while some stands, like the Duplo play area and the Lallaloopsy stand said you’d get a goody bag for visiting, we weren’t offered one and when Ameli asked about it she was told to come back later, but we were on our way out by then. 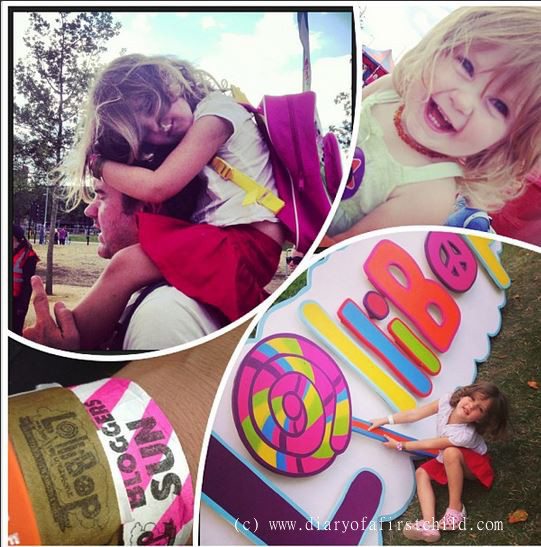 Price wise, tickets ranged from £11 or so on Little Bird to a ticket for a family of 4 ranging from £62 (Super Early Bird) to £110 (Standard ticket), with babies under 12 months free.

I felt bad because friends of ours went on our recommendation, and have since said they wouldn’t go again as it felt like a shopping expedition with a few things to do and see. Other friends said they wouldn’t go again as it was too commercial for them. Karen from Cafe Bebe went and loved it more this year than previous years, so obviously it is a personal experience, and dependent on what you got to see and do.

Would I go again?

Well, if we were paying for it, I’d have to think long and hard because I didn’t feel it was worth the money. A day at Peppa Pig world or Hobble Down Farm or Legoland is more fun for me. However, it’s a festival for KIDS and if I was invited again next year, I would go, yes, because my daughter – having no expectation of the day and living in the now, loved it and has repeatedly said she wants to go to Lollibop again and spent days telling everyone we went to Lollibop.

Next year, however, I would pack a picnic so we didn’t have to queue for food, I’d hope to go on the Friday again, and I’d get there for opening in the hope of actually getting to see a bit more.