Well, we’re two weeks in to this year’s growing and I’m cautiously excited. To be honest, I may have overdone the seedlings, because they’re doing really well, but will need thinning soon and I don’t have enough room in the house to keep them all indoors! But we’ll see how it goes.

I wasn’t going to spend too much time documenting our garden adventures, because I’m certainly no expert and everything we’re doing is trial and error. But there’s a great blog I’ve been following for about a year now – Mark’s Veg Plot – and I’ve learned so much from Mark and his documenting what he’s doing in his garden, that I figure it may inspire someone else to grow their own too. Trust me, if I can do it in our shady garden with two kids and no spare time or money, there are a lot of other people who can do it too!

If you’re seasoned at this whole gardening thing, and you see me doing something clearly wrong, please let me know! I did accidentally plant pumpkin seeds this week, then realised they weren’t supposed to be planted till May. I’m interested to see what happens to them now.

Two weeks ago we planted a bunch of seeds, and here we are, almost two weeks later, in a house full of seedlings. It’s brilliantly satisfactory, seeing little green heads pop out from under the soil. I do love it. It’s still really cold outside, so I’m leaving everything inside for the moment, and in a few weeks I’ll move it into the freezing conservatory.

Our sunflowers have grown so much I’ve had to stake them, and I think I’m going to have to find higher stakes soon. I’m going to have to plant them in pots, I think, because our soil is so wet from the flooding. I wonder if straws will be strong enough to hold them up. I may have to try. We had loads of them, but most of them became really thin and the tops died. I don’t know what that’s about.

The courgettes/zucchinis have done amazingly well. I’m happiest of all with them. Now I just talk to them every day and ask them to keep growing. They’re one of my favourite vegetables to grow or eat, and the flowers are my favourite thing ever, so I have high hopes for these ten seedlings – again, I’m not sure when to plant them out, but I’ll give them a few more weeks in the living room, till there are four ‘true leaves’ at least. I don’t suppose I’ll keep all of them, but maybe I can swap a few for something I haven’t grown yet.

I also sowed a lot of spinach, then thinned it out. The ones I plucked and replanted aren’t looking great, but the package said I should be able to start harvesting tomorrow! Erm. I think not. I guess I’ll sow a second round this weekend, in case.

There are also a few peat pots of three different beans. Again, I’m  not sure how they grow together, but here we are, enjoying the experiment. They are just starting to germinate under the glass there, so we’ll find out soon enough.

On the windowsill we still have the onion pot I planted, and the greens on that are growing like crazy. We’re eating those as they are quite strong and delicious, and in that space I can’t see too much growth from the onions themselves.

I bought that strawberry to plant outside, but I’m still scared of my post-flood garden. It’s not ideal just yet. I’ll have to transplant it soon though.

The potatoes have been chitting a few weeks now, and they should go outside next week, according to the instructions from the Potato Council. I hope we have a better crop this year, but I must admit I’m hesitant after last years attack of the slugs.

I’ve sowed three rows of spring onions, and I’m shocked by how they can grow in one day – not all at once though. Much like children, they’re pretty unique and tend to do their own thing! This weekend I need to sow the second lot, so there’s a fresh batch every two weeks. But I suspect I will have to thin them out soon too. I’m not sure how that works. I’ll read up on it today.

These are window sill carrots. In otherwords they grow round bulbs, rather than the  traditional long ones. I may have over sowed here too. The instructions say 5cm apart, although I’m not sure how many window sills they think people have!

The tomato planter was a Christmas present. I’m really nervous with this one. Last year my tomato plant finally  grew two little tomatoes, well after the first frost. Needless to say, we never ate from it. Sad but true.  I have hopes this year, at least. At least we’re starting them early this year, so we have a chance.

And finally, a gratuitous ‘I’m doing this with children’ picture. We read a story about Winnie the Pooh where Kanga uses a broken honey pot as a planter. At the end of the story there’s a task for little fans to plant their own seeds in an egg carton. I had both egg carton and seeds on hand, so Ameli planted them, then decided she needed to watch them to see if they grow – while munching on the honey cookies we made for Pooh Bear earlier. She was quite disappointed that nothing had happened yet, but we’ll keep an eye on it, and soon enough… 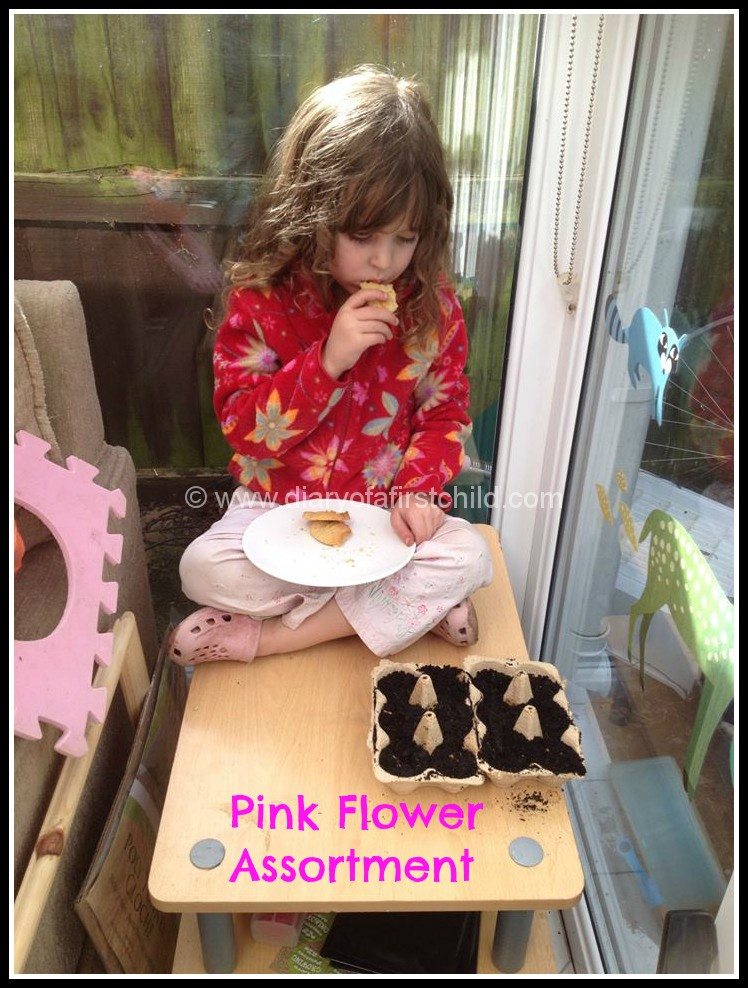