It’s “Ocean” week for us, as far as PlayLearning themes go, but you wouldn’t really know it. Ameli’s come down with some kind of random illness that started as soon as the dentist put fluoride gel on her teeth without telling me what it was, and she’s had a headache ever since with a mad fever for 20 hours, that’s turned into a 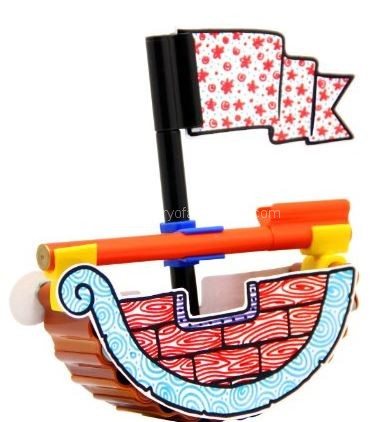 Before our dentist appointment, however, and a  for the past few weeks the girls have been playing with the new Faber-Castell Creative Craft Sets with Connector Pens.  We have the jungle set and the ocean set, which I thought would fit in really nicely with our themes from this month, despite the month going a little cra-cra on us. 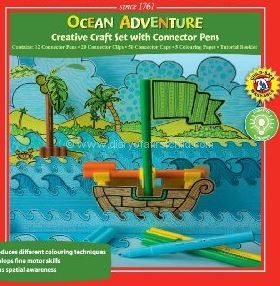 These Creative Craft sets are brilliantly odd. They make me think of superman. Is  it a bird, is it a plane? No… well, is it a pen, is it a construction toy? It’s both, which makes it just brilliant for holidays, car journeys and so on.

In the box you get 12 marker pens with caps which double as connectors. There are 50 additional caps that clip to each other, and the pens, and 20 half sized, swiveling connector clips. Then there are 5 colouring pages related to the theme (jungle, ocean) which can be coloured and then cut out to help with your designs. There’s also an instruction sheet with step by step guides on how to build the things in the pictures, kind of like LEGO instructions – for example in the Ocean Adventure box, you can build a ship, a fish, and so on. The colouring in sheets give you ‘backdrops’ for your constructions, and then the rest is up to you.

The Jungle themed box lets you build jungle critters, like an elephant and trees and so on.

You can of course just build whatever you want with the kits too. And eventually you do, since with a four year old and a 2 year old the pictures become unattached from the pens and end up everywhere but where they belong.

I would suggest that the 6+ age recommendation on these is probably accurate. While my two have thoroughly enjoyed these kits, I would have loved to see finished scenes from them, and well… it ain’t gonna happen.  The fish backdrop looks butchered as Aviya has used the lines more as a guideline than a recommendation, and by the time we’ve coloured one bit – say the ship sides – they want to build the design, meaning we have no brown pen to colour other bits brown with (since you use the brown pen for a mast) so having two sets has been really helpful.  It doesn’t really matter though – they’ve thoroughly enjoyed them in their own way. 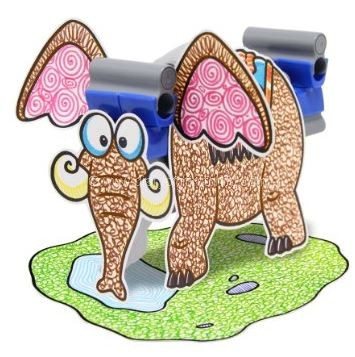 When we were away last week it was also really useful to pop a box of these in the Trunki, since we didn’t take a lot of toys, but on the one really rainy day we had, they were able to spend a few hours colouring and building and playing with it, so well worth the £7.99 as far as I’m concerned!