Everyone has a Frozen birthday party story these days. According to our local soft play ‘party hosts’, 9 out of every 10 parties they host these days are Frozen themed, and if you search for Frozen party on Pinterest you’ll have no end of Frozen party ideas, many of them versions on the same thing.

Well, my 2 year old has Frozen fever, and since we’ve just moved, I decided we’d not have a party for her this year, but she had other ideas and since mid-January has been going on about her ‘Elsa’ party. So, pretty last minute, I had to come up with a Disney Frozen party! Here are some of our ideas – hopefully you can use them to make your party as much fun for your Frozen fan as it was for my now 3 year old.

I always tend to plan a party in three parts – the decor, the food and the entertainment and try to make everything link, even tenuously, to the theme. Fortunately Frozen is so huge that you can get pretty much anything to fit any budget. (As compared to say, a Peter Pan party – there’s nothing commercially available for that!) 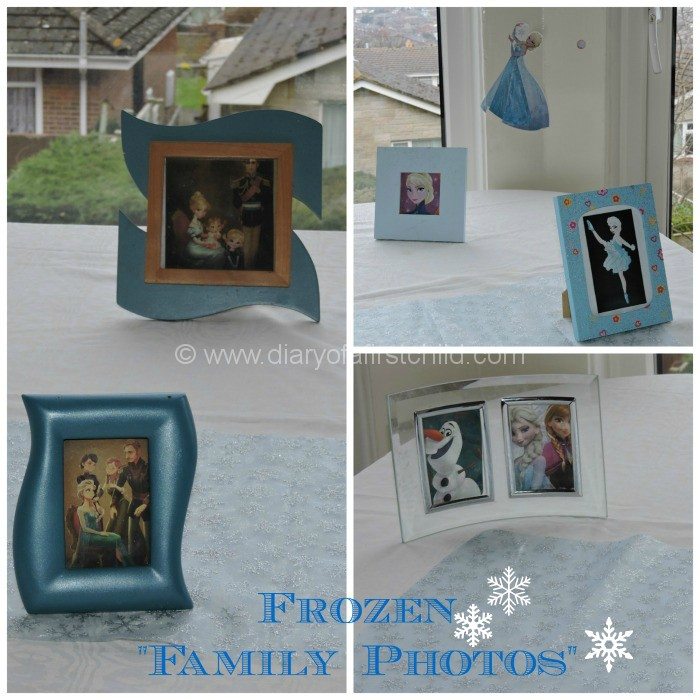 I haven’t seen this done by anyone else, but I liked the idea of ‘Family Portraits’ around the food table, and luckily found a bunch of blue photo frames at a jumble table. You can of course use any frames, but I was happy to find blue ones for free. The images in the frames were from a Frozen Activity Book and I found miacat7 among many others at Deviantart, and hope they didn’t mind me printing their images as ‘family portraits’. I thought the young Elsa doing ballet was particularly ‘family life’.

The beauty of a Disney Frozen party is that you can use a lot of your Christmas decorations – like my glass snowflakes mixed in with cotton wool balls for ‘snow’. My husband was sceptical at first, but would you believe it, it worked out quite well. I bought this bargain backdrop*, which makes a good photo prop, and we used the smaller images for party games.  I also have a snowflake table runner* that added a nice bit of detail, as does “Frozen” Snowflake confetti. 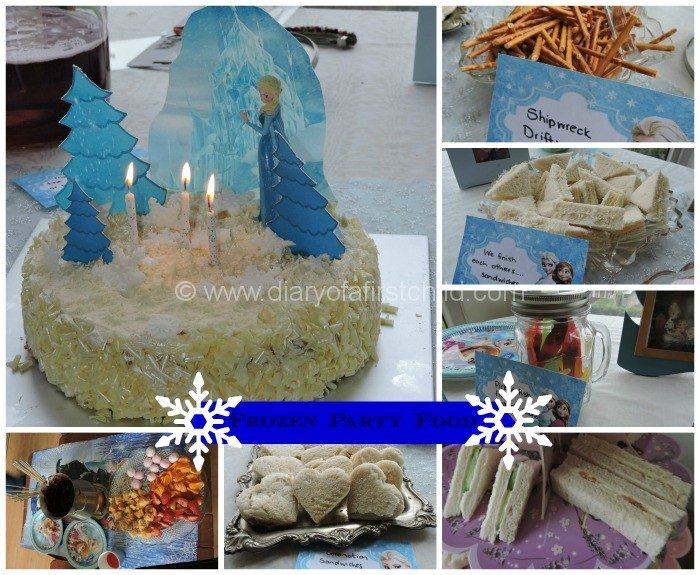 As for food, I went with a plain cake decorated with these cutouts* – not particularly original, but easy, and easy won the day! I used straight pretzel sticks* for ‘shipwreck driftwood’ – an homage to the parents, lost at sea. I bought jelly fish and labelled them as ‘Lutefisk’ from Oaken’s Trading Post and Sauna* (remember when Oaken offers some to Anna to forget about the unpleasantness with Kristof?) and of course, sandwiches, because – and I quote – “we finish each other’s sandwiches”.

I meant to have crown shaped sandwiches – I have three types of crown cutters after all, but I couldn’t find them on the day, so we went for love, and filled them with Coronation Chicken sandwiches. I like to play on words 😉 I made this stained glass window jelly desert too, and called it ‘ice & snow’.

And then, for the masterpiece, really, we had a chocolate fondue, because we know from the movie that the sisters loved chocolate. And because of that we made some white hot chocolate to drink too.

Finally, since our party was also on Mothering Sunday here in the UK, I made a platter of afternoon tea sandwiches for the adults.

For the name cards for the food, I used these free printables which added perfectly to the theme. 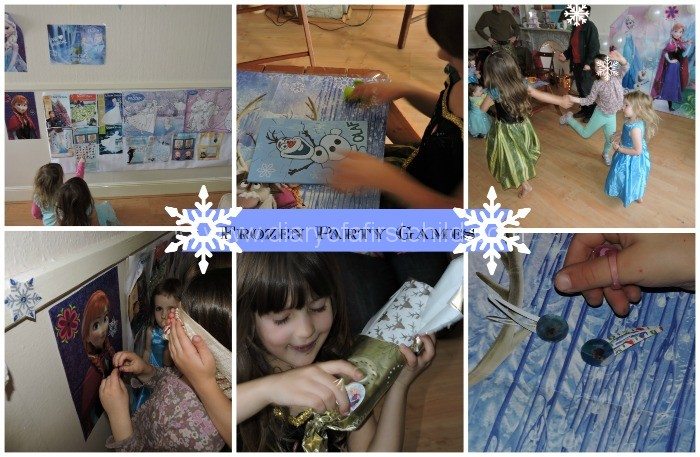 Speaking of party games, the pics above are: a wall of activity sheets and paper based games from a Frozen magazine – I find having ‘quiet games’ really useful for those kids who don’t like the crazy sugar fuelled games, and it’s good to have a ‘breather’ corner where anyone who wants a rest can go, but still feel part of the activities.

We also used an Olaf bath sponge puzzle with pieces scattered across the room. The children ran around collecting these, and on the back a clue was written that led them to a treasure chest – a pot of Frozen themed rings*.

The children were invited to attend a “Royal Ball” where we played musical statues listening to a Frozen movie sound track. The winner won a bottle of Frozen Bubblebath*.

Pin the tail on the donkey became Pin the Brooch on Anna – with the brooches printed from an image on Google and laminated.

From the beginning Aviya wanted Pass the Parcel – honestly, we could probably have forgone the party and just played Pass the Parcel and she’d have been happy! But since we had plenty of sugary chocolate, I didn’t want to put extra candy in the pass the parcel, so instead we used Frozen heart shaped erasers as gifts, and a bottle of Frozen themed shampoo* as the main prize.

Finally, I printed a picture of cupcake toppers* onto Shrinkles paper*, then cut them out and shrunk them down to thumbnail size. I put those with hairclips and glue on a table for the kids to make their own hair clips. (Next time I’ll use a glue gun since the glue we used wasn’t overly effective.)

Oh, and not pictured here was a selection of Frozen ‘tattoos‘* – they were much smaller than I anticipated, but the children were happy enough.

How to: Host A Winnie The Pooh Birthday Party
Our Disney Frozen Party
How To: Make a Sensory Light
Scooter Tips & Tricks Infographic