The pumpkins – and the people dressed in costume who are carrying them – make it to the parade, where they light up the area and everyone is smiley and happy.

So this isn’t really a ‘story’ – it doesn’t have much of a plot, and has no moral or theme. It’s just words on pages with really nicely done picture, but it’s perfect for beginner readers.

Aviya liked finding the right pumpkins and pointing them out – so she was able to identify the emotion or action (sad pumpkin or wet pumpkin, for example). With the emotion ones she also made the faces that matched the words, so I think it’s a good, simple and easy introduction to emotions.

The book is a bit young for being read to Ameli, but it’s a perfect early reader book because some pages have as few as two words on it, so they can read a whole book  in not too long a time, which I think is really encouraging.

Of course we can’t read a book without turning it into a craft, so we printed out pumpkins and faces and glued them on to make a pumpkin garland. You can find the printouts and instructions for the pumpkin garland here. 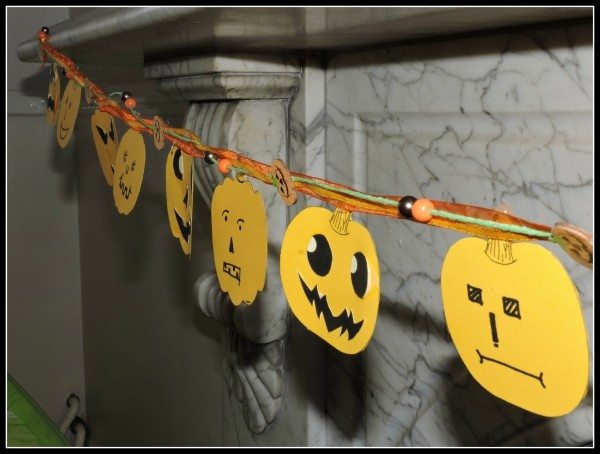 If you’re thinking of themed ideas for Halloween stories, have a look at these clever and fun Harry Potter themed lunch box snacks from Eats Amazing.

Zingzingtree’s fabulous bats make a great bunting too, and will complement the pumpkin bunting perfectly!