I am often made to feel a bit bad, because my children want a pet so badly. We can’t have one where we live – the landlord even pulled a face when I suggested a fish! – so I’ve been steadily increasing the girls toy pet supply in the hopes that it will fill the gap for the moment (I know it won’t really, but I’m trying here!). Over the last few months we’ve managed to collect a Little Live Butterfly*, Bubble Pop the Tweet Talking Bird* and Anna, the Digibird*. The latest addition to our collection is the rather epic Clever Keet Bird Playground*. 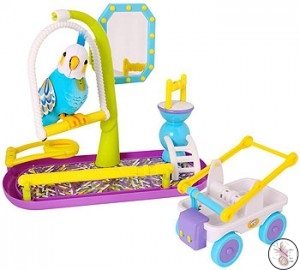 The Clever Keet Bird Playground comes with an interactive pet bird who talks, sings, dances and swings, as well as all the playground equipment, including a swing, wagon and mirror.

Finally, there’s also an adoption certificate in the box, to legitimise ownership and all.

On the perch Clever Keet will move himself forward and backwards causing it to ‘swing’, and when he’s on the ‘dance’ perch, he plays music and dances along to the beat of whatever music you have playing in the house. When Clever Keet is hungry you can put him by his food tray and he makes eating noises and sometimes burps much to the amusement of small children.

On the cart or wagon his body propels the whole thing forward – basically it’s the bird’s contact with the metal connectors that causes it to react depending on where it is. 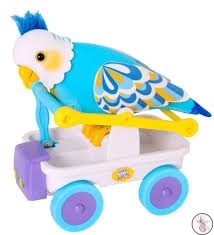 Actually, this toy does such a lot. Each of the different bits of equipment give it a lot of different options for things to say and you need to go through the manual to make sure you get the best out of the bird and all it’s options.

There’s also a record option where the parakeet will… well, parrot, what you’re saying in it’s own non-gender specific voice. My daughter loves this option and some of the phrases you teach it seem to be absorbed into it’s regular chatter, though I’m not entirely sure if that’s just random selection or if we’ve accidentally and unknowingly stumbled on how to make it do that.

This is’t a cheap toy at £44, but I reckon it’s pretty good value for money, all told.

The only negatives of the Clever Keet is that it’s movements have a loud mechanical sound, which sort of spoils the ‘realism’ of the bird. You also can’t buy a spare bird for the play equipment, which I think is a bit of a shame as there are multiple spaces for the bird to sit and at the price it would be nice to have a second bird if you have more than one child who might want to play too. The birds are quite robust and sturdy, and it’s tough to remove them from their contact perches, but that’s neither good or bad, really.

This play set makes up a huge present under the tree, so it’s pretty impressive and is sure to make someone happy!