Portable North Pole is an internet based system whereby you can send phone calls and video messages from Santa to your child.  We’ve done this a few years running now, always including it in our Activity Advent Calendar ideas

The parent logs in, sets up a voice or video call, adds in a bit of information, hits send and you’re moments away from a phone call from Santa – who is calling from Quebec, apparently, when you see the number coming up on your phone!

If you do the naughty/nice list you could, for example, get Santa to make an ‘encouraging’ call early in December saying that your child needs to listen a bit more (We don’t use Santa for behaviour modification, so we’ve never used this one), but there are also other options – for example Santa can call your child to say that he knows things are better and you’ve made an effort to improve (this one talks about an elf that keeps an eye on you, and that you’ll go on a ‘nice’ list.) But there are also calls to say well done on an achievement, or done well at school.

There’s another section on behaviours to improve – we don’t use these, but I’ve been tempted more than once to use the ‘stop fighting and arguing’ one, which is relevant and could be better than yelling. The jury is out!

There’s also a whole section of Christmas eve phone calls, which are great – Santa from the sleigh, cookies for Santa and so on, and a phone call that could be particularly useful if you’re away from home at Christmas, is one where Santa says he’ll still find you, not to worry – this was useful for us last year when we spent Christmas in Australia.

Earlier I said you could also use this as part of your Advent Calendar? A few examples are the phone call saying that Santa received the letter you sent – so that could make a great call a few days later. Similarly you could do the same with any wish list your child may have shared.

Like the phone calls, my children love the video calls. There’s a free video call which is perfectly good. We’ve used it a few times.  However the Premium videos give you choices – for example you can go on a 5 minute tour of the ‘secret places’ in Santa’s Village. Or a minute long clip of the reindeer getting ready to take off on Christmas eve, or watch the elves sort out all the letters in the post office… With an unlimited package you could literally have a video a week, corresponding with what you’re doing on your activity advent.

The videos also have a lot of personalisation options – the child’s closest family, a picture of their house, a toy they may have asked for, and loads of other things, which will then all show up during the video, like on the cover of the book Santa looks in, and so on. 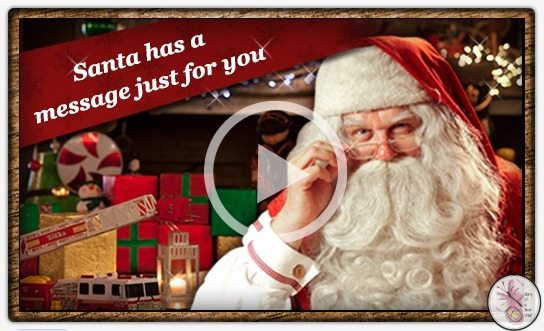 As for negatives, the only thing that I think could be improved is that each child gets their own call, you can’t have two children in one call. This makes it tough when you’re trying to get Santa to give them both the same message – you have to ‘send’ the call and make sure you have the right child in the room with you without raising suspicions! But that’s only a minor detraction.

The premium package – called the Gold Pass – costs £9.99 and I think it’s pretty good value for the sheer joy the kids get from it. Ameli is 6, and she knows Santa isn’t real, but that we like to pretend that he is, and even she gets really into it, responding to his questions and squealing gleefully when she hears his voice.

We received a free pass for Portable North Pole in exchange for this review.