Last year, before her birthday, Ameli and her dad finished reading the Narnia books, so when she asked for a Narnia party we were all very excited. We did, in the end, decide to limit it to a Lion, Witch and Wardrobe party, which she loved.

I had so many plans and ideas for this party. Everything from a horse drawn cart to take the guests from the ‘train station’ (the car park) 20 metres up the path to the manor house (the hall) and an indoor forest made of Christmas trees and a snow machine, but unfortunately in the real world, budgets prevent a lot of dreams. Story of my life. 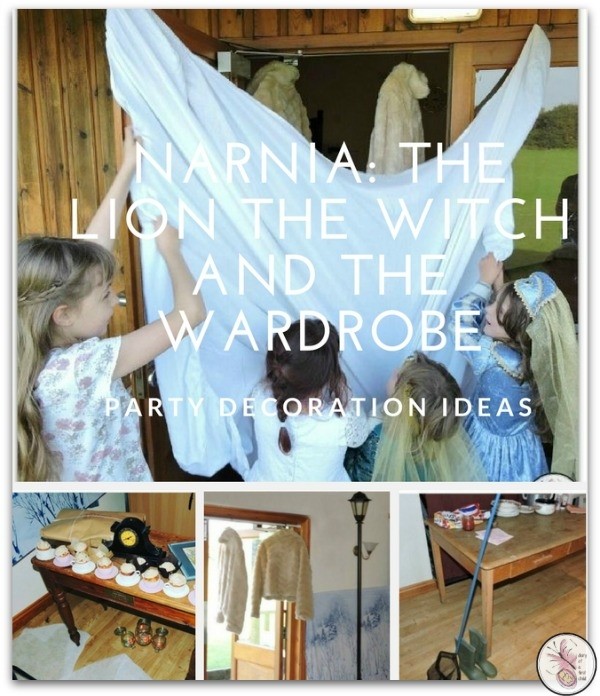 None the less, I’m really happy with what we did manage to achieve.

Outside the hall, while we were waiting for everyone to arrive we had a thin vegetable soup, boiled potatoes, and butterless toast – war time provisions! We also had games suited to the era: pick up sticks, yo-yos, marbles. It was interesting having to teach most of the children how to play these! 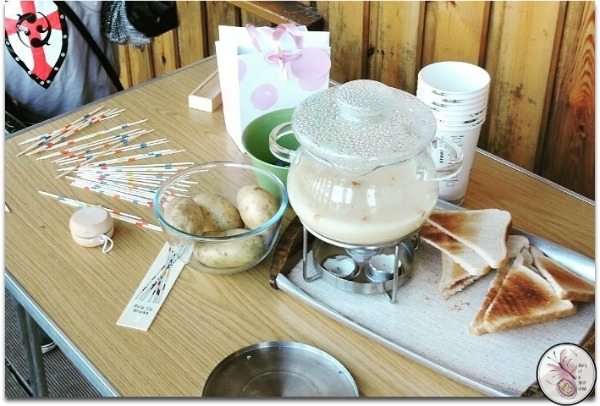 I didn’t have means to bring a backless wardrobe to the hall, so hung a sheet over the door, which the children revealed with great ceremony. I bought a couple of fur coats to hang in the ‘cupboard’ which was great for a walk-through experience. 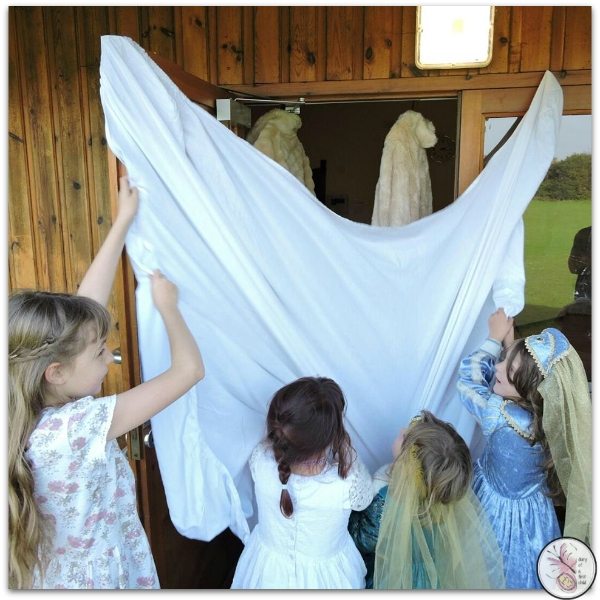 Just inside the door we had a lamp post which Ameli’s dad constructed and we bought a winter-scape mural* which was really fantastic for adding to the ‘feel’ of the room. It was a nightmare to keep up with ordinary tape though, as it’s large and quite heavy, so test it out before you need it. 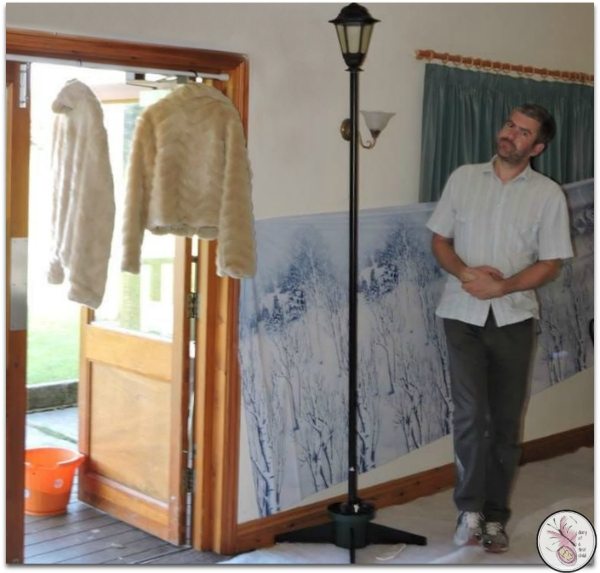 I split the room up into sections to sort of follow the story – there was a table for tea with Mr. Tumnis, dinner with the Beavers, encounter with the White Witch, high tea at the battlements and finally, the feast at the coronation.

For each section I pulled a passage out of the book, for those party-goers who may not yet have read the books. 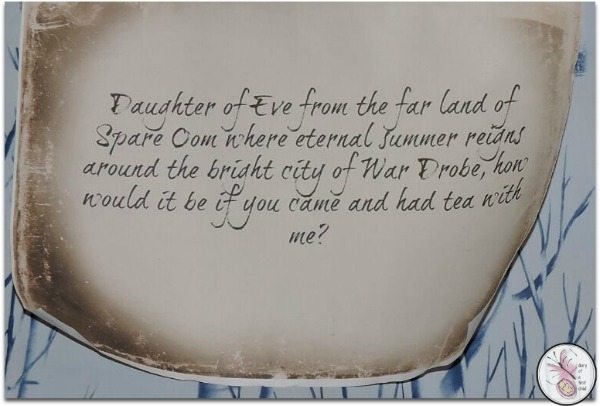 For Mr. Tumnis’ tea, I made chai tea cupcakes in tea cup cases, displayed a mantel clock (I would have loved to have a fire or heater with a fake fire in here, but alas – one of those budgetary restrictions! I also kept the pass the parcel game here, since Mr Tumnus was carrying parcels home (according to the movie, anyway). In leu of a fire, I had t-light candles in glass containers to at least give the idea. I would have loved an easy chair here too, but hey ho.

The floor had a layer of ‘fake snow‘ usually used for Santa’s Grottos. It looked great, but the kids kept slipping on it, so we moved it to the side eventually. 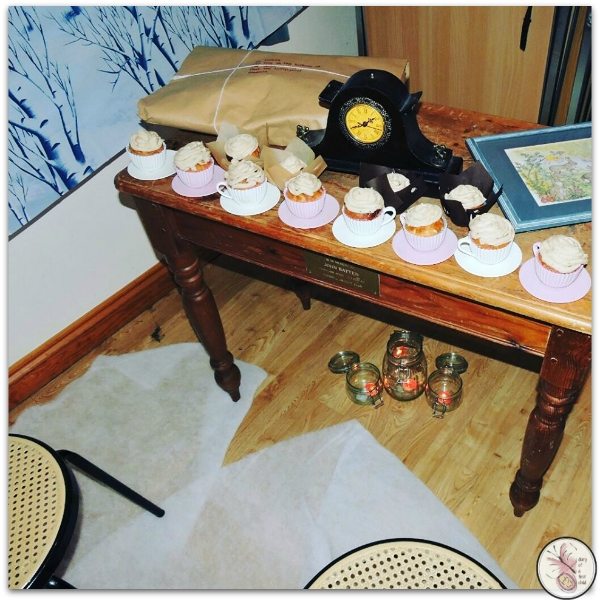 In the next corner was dinner with the Beavers. We had an old table, a mix and match assortment of plates, pots, kettles  and so on, as one might have in a farmhouse-style kitchen, and I had dark curtains hanging behind, to look like a home. There was a fishing net and wellies too, because… well, in my Narnia, Beavers wear wellies when they go net fishing! Just before people were let in to Narnia, I put fish and chips in the oven – well, fish shaped fish fingers and oven baked chips. These were put into individual packets for the main ‘meal’ of the party.

(Again in the movie…) the Beavers leave home in a hurry with Mrs Beaver fretting about what food they should take with them, so the table has a loaf of bread and a scraped out and left open jam jar, with serviettes on it too. 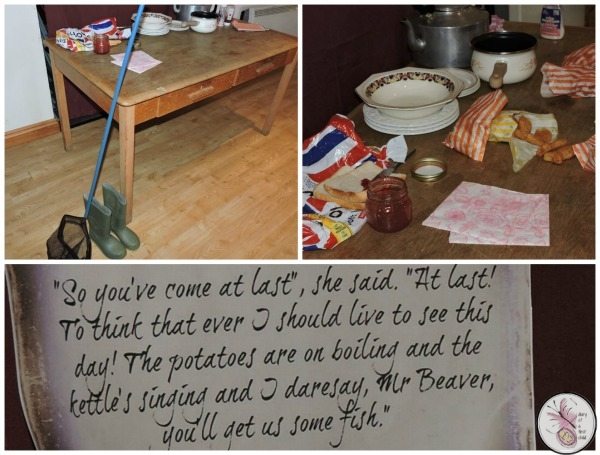 The White Witch’s table was plagued with disaster! First we made a sleigh out of plasterboard, and attached it on two sides to a wooden toy box, but we had no idea how fragile plaster board is, so the front of the sleigh broke clean off and was only usable as a photo prop. Barely.

I also bought a most beautiful flute shaped jug for the hot chocolate and had no idea that pouring room temperature hot chocolate into it would cause it to explode all over the kitchen. We also had an antique glass and silver dish for the Turkish Delight, but I was so put out by that whole station, I forgot to take a picture of it until the end. 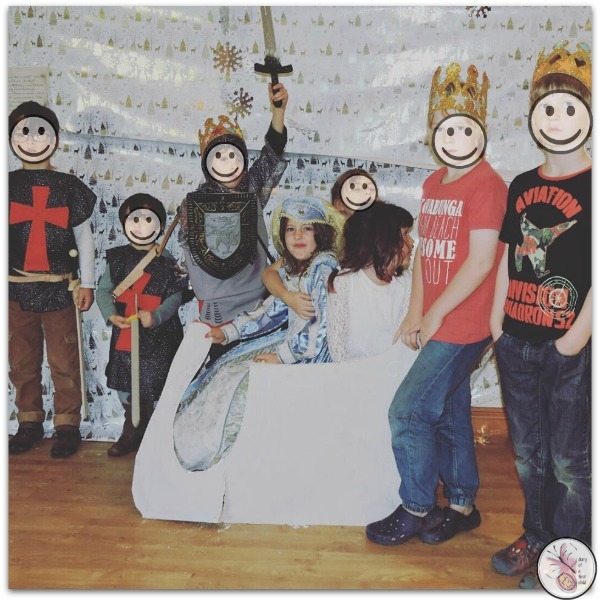 From there we skip a few chapters in the story, till we get to the battle station, where the army is camped out. I remembered that I had this old knight statue from a previous relationship hidden away in an old box, and decided that now was as good a time as any to use it. I found a picture of the tents online and printed it out over 16 pages. It was terribly pixelated up close, but as a general ‘view of the room’ it was pretty good and totally set the scene for that table too.

On this table I had the high-tea that Aslan set out for the siblings after they arrived. I picked up cheap shot glasses and filled them with individual cheesecakes and my great-grandmother’s traditional trifle. I also discovered edible gold spray which made for a beautiful gold threaded chocolate chip fudge that went down a treat. We also had salmon sandwiches and the Beavers’ packed jam sandwiches.

Cheap plastic spoons are quickly transformed when you add a self-adhesive strip of sparkly jewels to each stem, and the same with plastic champaign flutes. I also scattered clear mint sweets around the drinks table as ‘gems’. 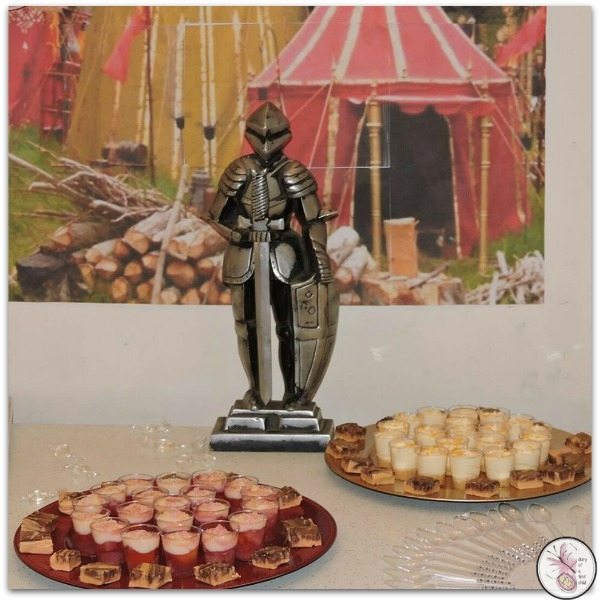 Finally, after the battle is won and the kings and queens of Narnia are crowned there’s a feast and in the movie interpretation there’s lots of golden fruit. I used the edible food paint to spray the fruit gold and silver.

I’m not master cake decorator, but it’s my personal mission to make my children’s birthday cakes every year, and while I’m sometimes left a bit shame-faced, they love them, so until they tell me not to, I’ll keep going.

This cake had a dolls house wardrobe on top resting on a ‘wooden’ floor. The top layer of the cake was wintery Narnia, and the bottom layer was summer- Narnia, as per Ameli’s request. 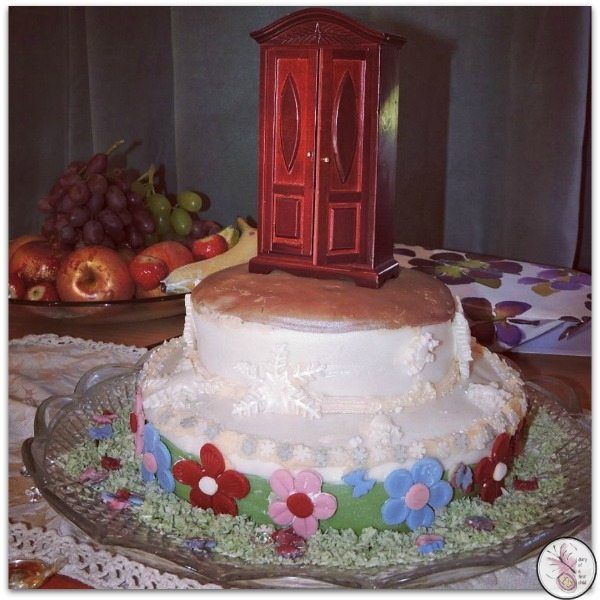 The room décor allowed a lot of photo opportunities, and I’m thrilled with how it all worked out – as you can see, lots of smiley happy faces 😉 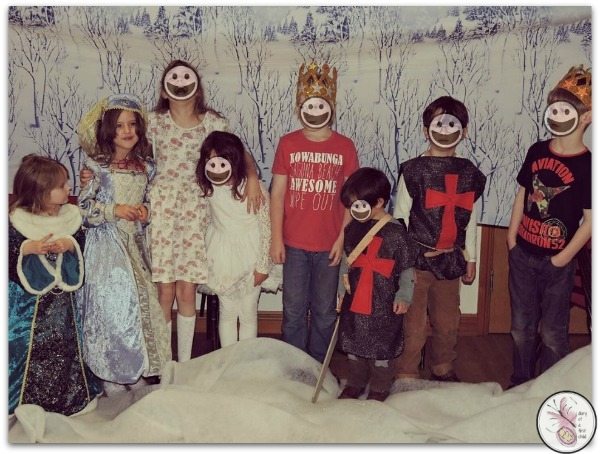 Games for a Narnia Party 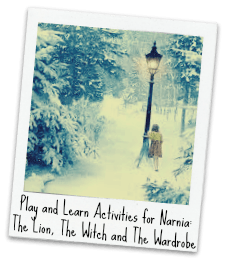 Narnia Party Decoration Ideas
The Lion, The Witch And The Wardrobe: Narnia Party Games Ideas
How To Make A Princess Poppy Necklace
A Trolls Party On A Budget