If your little one is a fan of Andy’s Wild Adventure on CBeebies, Immediate Media have a treat in store for them: The new Andy’s Amazing Adventures Magazine which launches today.

What they tell us about Andy’s Amazing Adventures Magazine: 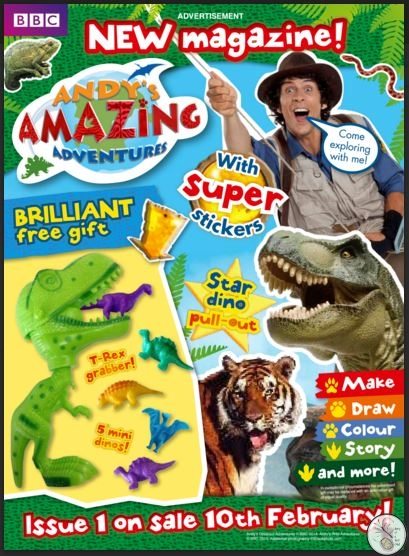 This magazine is aimed at 3 – 6 year olds, and the magazine is based on the extremely popular CBeebies shows Andy’s Wild Adventures, Andy’s Dinosaur Adventures and the forthcoming Andy’s Prehistoric Adventures and will cover all of Andy’s adventures.

In each issue, Andy will be their trustworthy guide as they explore the world and even travel through time, meeting creatures, facing dangers and solving problems along the way. It is packed with puzzles, stickers, colouring, stories and comes with a great free gift with every issue.

The magazine is based on the 7 key areas of learning that support early years development so it’s full of fun things while also supporting the readers’ learning.

What did we think of Andy’s Amazing Adventures Magazine?

We’ve received the first edition in advance of today’s launch, and the first thing I noted about the contents were that they are spot on for their target. My 6 year old finds all the puzzles and activities easy, but not boring and my 3 year old finds them challenging enough to do together, so I think it’s perfectly targeted.

The magazine is indeed filled with puzzles and activities. In the first issue you can cut Andy’s hat out from behind the cover page and stick the hat band on it too.

There are things to draw and pictures to colour and there are stories too, as Andy goes on his adventures.

The centrefold is a pull out T-Rex image, and the magazine comes with a T-Rex with an opening jaw and five little dinosaurs. My daughter spotted the ‘string’ in the T-Rex’s mouth (the pulley that causes the jaw to open and close) and promptly cut it because she didn’t know what it is. Suffice to say she does now. But maybe mention this to your own children! 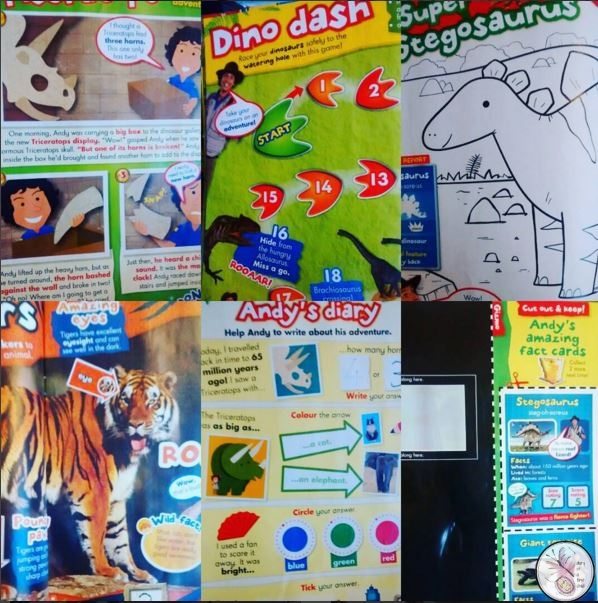 The back page has fact cards to cut out – these would be good to laminate, hole punch, put on a key ring, and collect.

I will be honest and say that there are a lot of things about dinosaurs that I take with a pinch of salt, because it’s really all a series of deductions rather than, say, I witness accounts, but we live on the Isle of Wight and there are a lot of dinosaur bones and dinosaur museums and what not, so it’s great for the children to learn anyway

The magazine is great. My 6 year old sat working through it for over an hour, asking if she could delay bed time to carry on.

BBC Andy’s Amazing Adventures magazine is available now from all good supermarkets and newsagents at £2.75