Like most children, mine developed an early love affair with playdoh. Like most parents, I did not. It was a substance that came into our house proudly as a set of single colours, but left it shamefacedly, hidden in a bin, an odd brown colour. Eventually I gave up the pretence of perfect parenthood, and banned it.

But children… children really have that whole ‘where there’s a will there’s a way’ thing down, don’t they? A few weeks ago Ameli called me over to show me what she’d been crafting, and she had turned my entire brand new pack of blu-tack into a sad, monochrome blue fish tank with remarkable sea creatures inside a punch bowl! So I promised her some plasticine… one day. 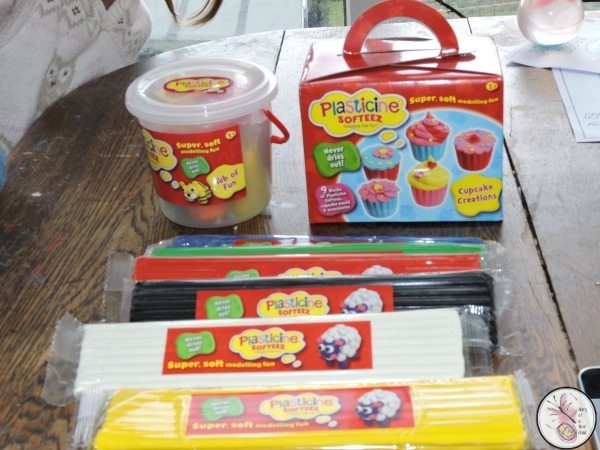 Well, one day came sooner than I expected because we were sent not one, but three two of Plasticine Softeez to review just days after the sad fish bowl experience.

You can watch the whole unboxing and the fun they had with it on the video here, but for the highlights, read on!

We were sent a box, a bucket and a bunch of loose colours.

The colours are a great size, and you can make plenty of shapes and moulds with them. They are also perfect for learning the ins and outs of colour mixing. A little of this and a little of that makes a whole new colour – a little more of the one makes it darker. It’s a great art lesson, really. But yes, eventually, it ends up a mixed mass of colours. That’s more down to my 4 and 6 year olds though – certainly not a fault of the product.

The box contains a cupcake mould and icing cutter and a rolling pin as well as a ‘carver’ as the kids call it. There are also instructions to get you started, should you need inspiration. Along with that comes a 8 mini plasticine sticks – again, more than enough to get you started.

The bucket contains two cutters – a butterfly and a crown – and five coloured mini-sticks of plasticine.

The good thing is that your sets are all interchangeable, so the kids made a cupcake and decorated it with the butterfly and crown cut outs from the other set.

And once they’ve followed the instructions they went off with their own imaginings, creating some truly fantastic wildlife creatures. I actually think Ameli has some actual talent there. I know when she asmed me to asked me to make a dolphin for her I spent almost ten minutes doing it and then had to explain to her what parts were what! She redid it her own way, and it was amazing in comparison. 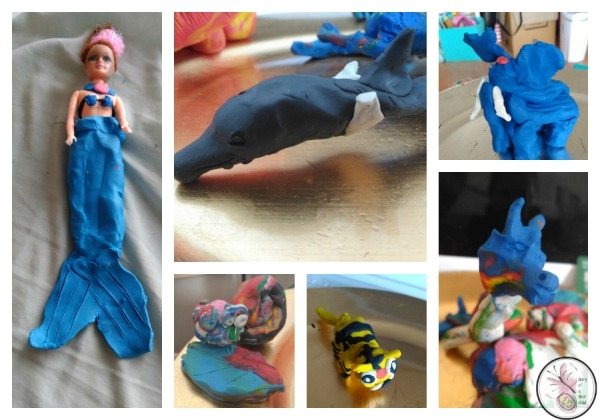 So now not only do we have a fishbowl complete with dolphins and mermaids, but we also have a whole safari in the living room.

A definite bonus of plasticine is the fact that if it is left out overnight, it doesn’t dry out, so the reuse ability options are endless. I loved the silky smoothness of it too. It’s soft, pliable, and easy to work with – a definite favourite here. For the kids. I mean, user error still sees it squished in the carpet!