Sometimes really bad things happen in the world. Things that can hardly be explained among grownups, never mind being explained to  young children.This weekend one of those bad things happened. A bunch of people were in a nightclub in Orlando, dancing and having fun, when a man walked in and started shooting. He killed 49 people that night, simply because he didn’t agree with some of their choices. It wasn’t any of his business, really, but he felt they deserved to die. And ended up dying himself, leaving behind his own wife and child.

The whole situation is terrible, but there’s one story I want to tell you about. One person who really touched me. It was a young man by the name of Eddie Justice. He was 30 years old, and while he was pinned down in a bathroom, held hostage by the gunman, he was sending texts to his mother. When I read that, I cried.

I’ve had a knife held to my throat during a robbery, so I can imagine a little bit of his terror, but what I can’t begin to wrap my head around is the helpless anguish of his mother, waking up to a series of texts, hearing her son’s voice saying ‘call them mommy’, ‘i’m going to die’. and more like that. 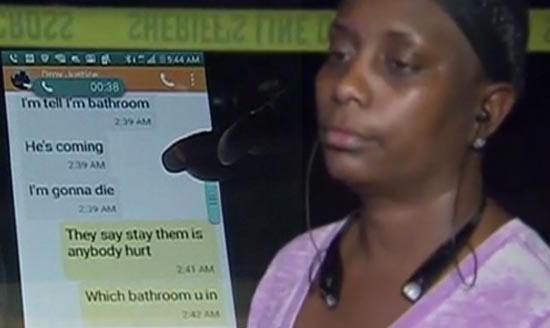 Why does this man touch me so much? Because he was there, at the end of his life, and who did he reach out to? Not the police, not  friend, a lover. No, it was his mother he needed then, and reached out to. What a burden on her that she couldn’t save him, but what a blessing too, to know that he felt that he could get in touch with her at 2am from a nightclub and that she would be there for him.

In the loss, I hope that his mom, Mina Justice, can take some comfort from the fact that her boy loved her so much, believed that she would be there for him enough, that he was able to reach out to her, to share his last moments with her. In the face of such a tragedy, I can’t imagine a more comforting thought.

Girls, when you cry, you always run to me. I pray that never stops. In the every day that makes up our lives I am sometimes short tempered, sometimes exhausted, sometimes fed-up with your bickering and your fighting, but I will always have your back.

Last week when a boy threatened to punch Ameli in the nose I got angry. I spoke to his caregiver, and gave him a pointed look and you were embarrassed. You didn’t want me to make a scene. I tried not to, but I couldn’t let someone threaten you in that way. Threatening you was threatening me. Don’t expect that to get better as you age. But don’t let my desire to protect you stop you from telling me when you need protection. Allow me to be the person you call out to. Allow me to be there when you’re falling. Allow me to be your safety net, your comfort, even if I can’t save you.

I ache for this mother. No mother should see her child die. I can’t imagine anything more cruel. I ache for the 48 other victims and for the apparently heartbroken mother of the shooter – her grief and confusion is as valid as anyone else’s, though socially she is less entitled to her grief.

I hope in your hearts you know – like Eddie Justice knew – that I will always have you. I will always be there for you. You can always count on me. You are never alone.

I love you to the end of everything