Happy Dr.Seuss Birthday! I know this makes me sound old, because I never asked this as a kid, but where’s this year going! I just packed away the Christmas decorations, and here we are into the 3rd month of the year already.  The 3rd month does start with a bang though, with World Book Day and Dr Seuss birthday on the 2nd of March.

If you don’t have the fantastic collection of Dr Seuss books there are a good selection of the short movies available online that you can watch in a pinch: 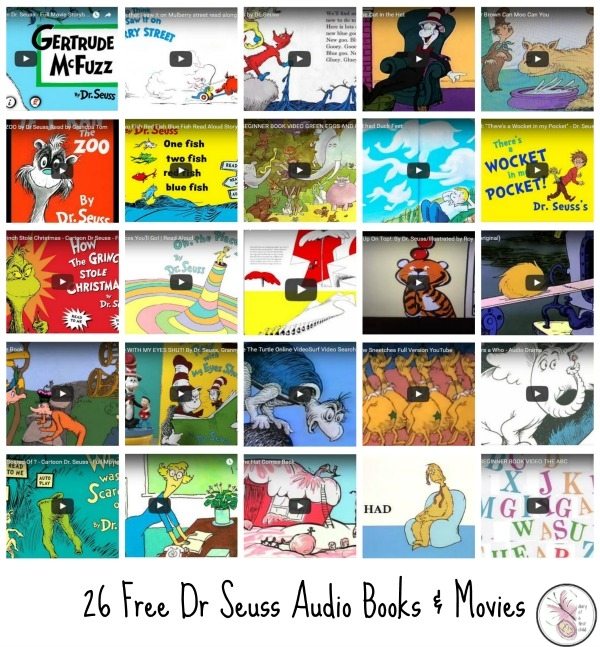 Horton Hears A Who

We love this story. Apparently written about post-war Japan, a small country that needed America’s help, and dedicated to Seuss’ Japanese friend, there are valuable lessons about care and friendship in this book.

In 1953, Geisel [Suess’ real name] visited Japan where he met and talked with its people and witnessed the horrific aftermath of the bombing of Hiroshima. He soon started to rethink his anti-Japanese vehemence. So he issued an apology in the only way that Dr. Seuss could.

He wrote a children’s book. 1

This is an audio version, but the brilliant 2008 movie version is well worth watching too.

Another movie that has been redone in the 2012 version is The Lorax. This book wasn’t well received by fans in the beginning and only became popular when the environmental movement became more popular.


There’s A Wocket In My Pocket!

Another read through, rather than an actual movie, but it does show you the whole book.

Mr Brown Can Moo! Can You?

Not identical to the book, but this is a fun watch, though not the best quality.

Skip this one to 2:10 to start at the movie itself. Not a huge amount of story here, but lots of rhyming words.

In the 1950’s children were taught to read by identifying and memorising words, so books would have the same word repeated over and over in an attempt to teach them to read. Seuss found this insanely boring – since it is – and didn’t feel it would encourage a love of reading, so with his first wife he set up the Beginners Books at Random House

The Sneetches is my favourite Dr Seuss book, because I tend to have a rather cynical view of most of the world anyway.

This story teaches children a valuable lesson through not-so-subtle metaphor as only Dr. Seuss can. It provides the message that race and ethnicity need not be dividing lines in our society, and that we can coexist peacefully, regardless of our external differences. 2

You can turn this into a good game too – divide the children into ‘with stars’ and ‘without stars’ and play a “Simon Says” game where the children who get it ‘wrong’ have to move to the opposite team.

Ten Apples Up On Top

This is a proper bootlegged version of the movie…

so if you can’t get on board with that, this song version might appeal more:

I Wish That I Had Duck Feet

One of the better read throughs of one of the lesser known stories. Fabulously imaginative story though!


The Cat in The Hat

In the mid 1950s, Dr. Seuss’ publisher generated a list of 400 common words and asked the author to refine this list to 250 words and write a book using only those words.

Nine months later, Dr. Seuss completed The Cat in the Hat, which used 223 of the words from his publisher’s list. Most of the words that Dr. Seuss used are included in Dolch’s sight word list, a list of 220 common words frequently found in printed material. 3

The Cat In The Hat Comes Back

The sequal to The Cat in The Hat, obviously. This was going to be made into a new movie too, but Mrs Dr Seuss decided not to allow any further live action adaptations of Dr Seuss’ work.

This book is about Hitler, really, but your average child wouldn’t realise that, out of context. They will learn from it though, about dictators or people who abuse their power, and who tread on others to get where they want to go. And there’s a lesson there too, about pushing people too far: you never know when they’re going to burp, and bring your whole world crashing down, so it’s a good lesson to the bullies out there too.

Also, it was the first time a burp happened in a children’s book, and that was what made this book controversial! 4

Another not very well known book, but fun reading.

This book was another challenge  – this time to write a book using only 50 words. It seems like he was one to enjoy a good loophole, so while there are plenty enough words to make up a story, it actually only uses 50 words, many times over.

Another from the Beginners Books series, This is a fun counting story.


I Can Read With My Eyes Shut

This is another of our favourites. It’s rhythmic and gets you excited about the ability to read. Pity I can’t find an animated version of it!

Apparently this book was written to an unborn child, to be read to the unborn so that they’d be exposed to the rhythmic style of reading from the start. Interestingly, it’s one of the best selling Dr Seuss books as it’s often given as a graduation gift. 5

It may seem like a simple book of rhymes, but it’s also about having wonder and delight—in anything and everything, no matter how strange, offbeat, or wacky. 6

What Was I Scared Of?

A book about facing your fears, but especially when those fears are because you don’t know or understand the ‘other’. Like many of Dr Seuss’ books, it’s quite a political and social statement – if we give the ‘others’ a chance, we might actually find we like them.

This book was pulled from the shelves in the US for many years as it was a metaphorical look at the Cold War and the arms race. It’s a fun story using fictional groups arguing over something quite ridiculous – butter side up or butter side down. It’s another important political statement – also a little about questioning the establishment, which is always uncomfortable.

How the Grinch Stole Christmas

A Christmas favourite, this has also been adapted recently in this 2004 version. Recently being relative!

If I Ran The Zoo

Dr Seuss introduced many words into our language, but the one that’s stuck the most is the word ‘nerd’ from If I Ran the Zoo 7

Lots of tongue twister sentences in this one!


And To Think That I Saw It On Mulberry Street

A read along of the book that started it all off – after 27 rejections from publishers! A lesson in never giving up, for sure!

I’d never heard of this book before, but it’s a good story about accepting yourself and being happy with what you have, and the pain that comes with greed – and the growth too.

If you’d like to watch all of these, head over to the Dr Seuss playlist here.