I don’t know about where you are, but here in my little spot of the world, there  are definite signs of warmer weather in the air, and while I’d love to say about how I’m having dreams of ice creams and lollipops, that would be a lie, as we’ve been having them for almost a month already! I’ll be sitting wrapped in a blanket wearing long sleeved everything and an oversized scarf draped over my shoulders and still have to blow into my hands to unfreeze my fingers from time to time, and my girls will be begging for ice cream! Obviously they inherited this from the Celtic side of the family, not from my Southern Hemispherian self! But it did give us a good opportunity to test out the Chillfactor Pull Pops we were sent a few weeks ago. 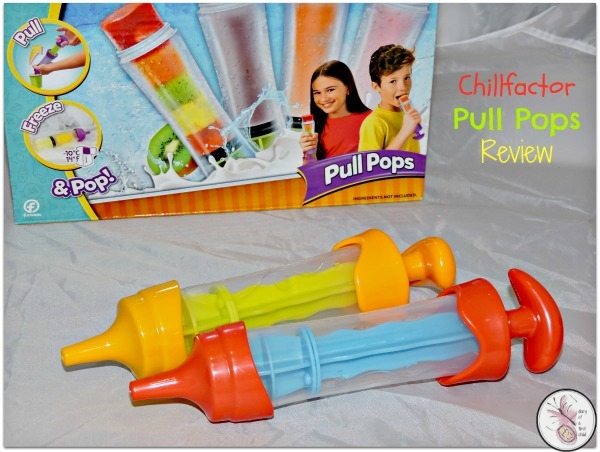 The Chillfactor Pull Pops basically look like a large syringe in which you create and make delicious ice cream/popsicle/frozen fruit creations, and which you then eat out of the top after removing the sucky-uppy bit (my technical name for it, not theirs).

Along with the two syringe like plungers you receive a stick for adding essential flavours once some freezing has occurred,  a bowl for sprinkles and the like, and a syrup dispenser bottle. 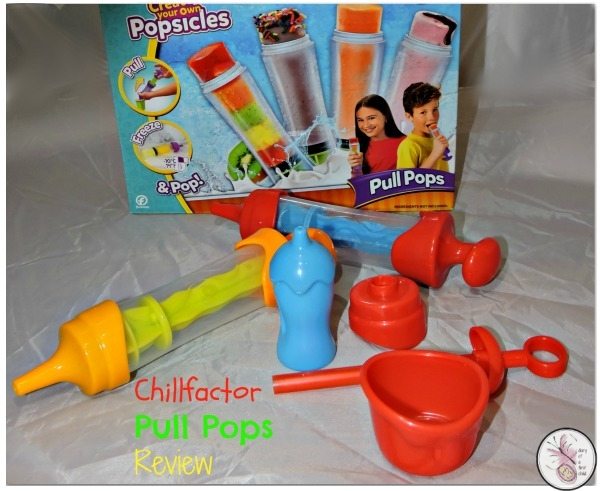 The combination options for the Pull Pops are endless. Our first attempt was simply a kids-drink poured into one and frozen as a standard ice-lolly. Our second attempt was milk mixed with strawberry syrup (like the kind you pour over icecream) frozen in alternating layers with a milk mixed with vanilla syrup (like the kind you use to flavour your coffee).  This took a bit more time as we had to top up the flavours every couple of hours, but was worth it in the end.

Next we tried yoghurt – for one pull pop I scooped in some yoghurt getting it all around the edges, then added strawberry syrup around the edges and topped it up to the top with more yoghurt. For the other one we added the syrup first, then filled it with the yoghurt. While this was the prettier option, the syrup doesn’t really freeze, so it just formed blobs of strawberry syrup at the bottom of the plunger. (I suppose the syrup is heavier than the yoghurt, too.)  Either way, the kids loved it.

And of course you can endlessly change the options – chocolate milk, soft drinks, even coffee or wine, but don’t confuse that with the kids ones! 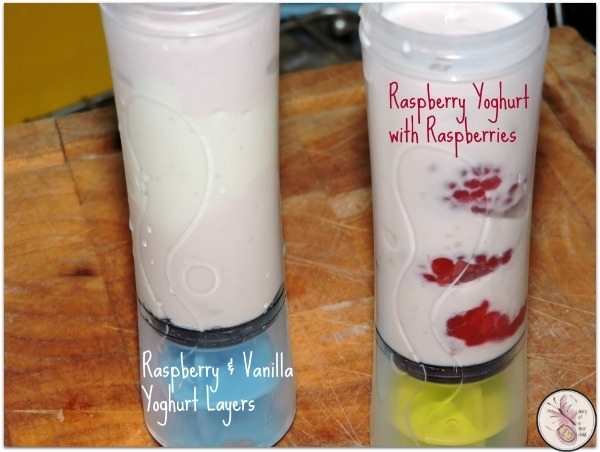 Once you’ve filled the Pull Pops you can detach part of the plunger, which both saves space in the freezer, but also gives you a flat surface for it to stand on, which is rather necessary to get it freezing in straight lines. It simply clicks out, and when you’re ready to eat your ice pops, click it back in and you have an ice cream cone on the go.

You can, of course, fill the Pull Pops maker with any myriad of unhealthy (and inevitably tasty!) foods, or you can go really healthy and add yoghurt, fruit juice, sliced fruit, milk or anything else that will freeze. My kids don’t seem to mind what goes into it, so long as what comes out is frozen, pretty and tastes great – in that order.

The only negative isn’t really for the product itself, but for the marketing. From the images it looks as though you’ll get four Pull Pops in your box. You have to actually look at the small pictures on the box to see that there are in fact only two. There are four colours to collect, but there are only two in a box. I think this is a bit misleading and I know I’d have been quite annoyed if I bought it for my three kids and found there were only two. I have only two kids, so I get to make them Pull Pops every day and watch them eat them the next day. They don’t really like sharing with me either! Cheeky things.

Aside from that, it’s a brilliant activity for the children – get them to fill one in the evening, and they can have their ‘ice cream’ aka pureed fruit mixed with home made yoghurt straight after breakfast the next morning.  Everyone’s a winner.

The fun design is also a talking point for them, and they love the ‘sciency’ nature of sucking stuff up through the syringe.