It’s women in aviation week this week, and as it happens it’s also Bostik Blogger’s ‘Flying’ theme this month, so having already learned all about Amelia Earhart recently, we looked at someone different this time – Élisabeth Thible, the first woman to fly in an untethered hot air balloon.  From Wikipedia:

Élisabeth Thible, or Tible, born in Lyon was the first woman on record to fly in an untethered hot air balloon. On June 4, 1784, eight months after the first manned balloon flight, Thible flew with Mr. Fleurant on board a hot air balloon christened La Gustave in honour of King Gustav III of Sweden’s visit to Lyon.

We decided to make hot air balloon tea-light candless, which looked really pretty floating about in our indoor lemon tree… until they got nice and hot and started melting the foam sheets and the glue! So we decided that perhaps a candle wasn’t the best idea. Fortunately we were able to pop out the tealight candle and fill the holder with birdseed – which isn’t much use on our indoor tree, but will be once we transfer it outside!

For hot air balloon bird feeders you will need

I started by preparing all the parts:

Use the glue gun or glue dots to attach the ends of the three bits of wire to the bottom of the tealight holder.

Glue the sides of the tealight holder well, then wrap the string around it. Hold it for a few minutes so that it can set properly and hold fast.  Twist the tops of the the three bits of wire together so that they are entertwined and make a point.

Squeeze some of the glue between the pointy end of the teardrops and push the entertwined wire from the bottom section into it. Do the same with the looped wire, into the top join. Lay the balloon on it’s side so that it can dry securely. 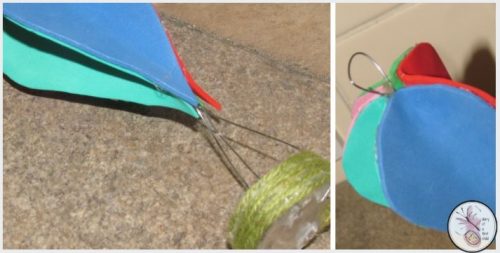 Fill the base – the basket – with bird seed and hang in a tree.