Continuing on the theme of all things poo, I have asked my friend Rebekah from Thoughtful Momma to respond to the negative reactions people normally have to Elimination communication (in two parts). Rebekah has used EC with her three children, quite successfully.

Hello! Thanks very much for giving me the opportunity to talk about one of my favorite parenting topics! I’m writing this with the assumption that anyone reading this article has read the previous ones in this set and is familiar with what EC is and what its basic practices and philosophies are. I was asked to talk about the â€œconsâ€ of EC and explain a little bit about what they are and how they are dealt with. I sincerely hope you enjoy it.

First, I should probably give my â€œcredentialsâ€. I’m a SAHM to three children, ages 6yrs, 3yrs and 1yr old. I discovered EC when my oldest was 4mo old and we’ve been hooked ever since. We’ve practiced everything from full-time, diaperless EC to part-time with disposable backup EC and everything in between.

Over the last six years, I’ve learned that potty independence is a natural thing that children are instinctively driven to learn, just as they are driven to learn to walk and feed themselves. 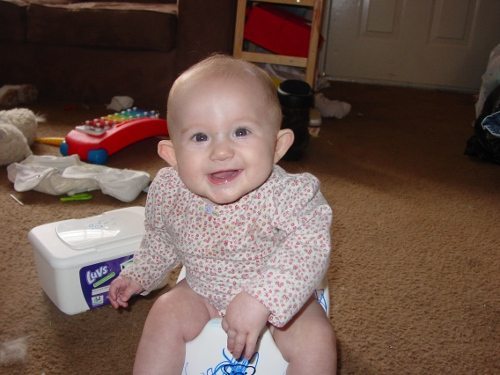 When I was approached about this post, I really had to think long and hard about what to write! The only actual â€œconâ€ that I can come up with is that EC is so rarely practiced in Western culture that it isn’t well supported. It’s not something most of us learn as we grow up so those first few days or weeks using this method are much more challenging than they are for our sisters around the world.

Most of the cons people present to me are actually misconceptions that are a reflection of this truth, rather than actual negatives within the method itself. The three most common of these are as follows:

2) Isn’t it messy and unsanitary?

Let’s start with number one. For most people, the idea that a baby is aware of his elimination needs and able to communicate them is a totally foreign concept. We aren’t looking for those cues because we don’t realize there are any! Not only that but a lot of people have this perception that babies are unaware of the fact they need to go and some people even insist that babies aren’t aware they are going (one woman actually insisted to me that poop just â€œfalls right out of themâ€).

The two of these issues make EC look overwhelmingly difficult and labor intensive. Pleasantly, the truth is that it’s not really more work at all, though at first, it might feel that way. It is complete misinformation that babies cannot feel and are unaware of their need to eliminate. Babies are very much aware that they have to â€œgoâ€ and, while they are unable to withhold against pressure, they ARE able to release at will.

If you think about it, you’ll realize you’ve seen proof of this many times, possibly even cracked jokes about it.

Have you ever watched a baby turn red in the face while â€œdoing their business?â€ How about grunting happily along and then a BIG SMILE when they’re done? It’s amazing what we accept as â€œfactâ€ without really thinking about it, isn’t it? (I’m guilty, too!) Babies can feel when they’re hungry and it only makes sense that they can feel when they need to pee or poop, too. Their nerve endings hardly fail at the belly button, right?

Making the transition from being aware the baby has gone to being aware that the baby needs to go is enlightening but admittedly a bit of a challenge. It’s not part of our culture, most of us have never observed anyone else doing it and it takes a little while to get used to.

The thing is, though, that we pay this kind of attention to our babies all of the time without even realizing it. We watch for signs the baby is hungry before she begins to cry hysterically. We look for obvious indications of discomfort to help us figure out why she’s upset. Doing these things is instinctual; we don’t think of it as â€œworkâ€ so much as just part of having a baby. A few days of observing the baby might feel like more work than just putting the diaper back on and forgetting about it but if you stick with it, it soon becomes second nature.

Not only that but once making catches becomes routine, I have found it to be far *less* work than standard diapering. I’ve yet to meet a mother that doesn’t understand the horrors of diaper explosions. Imagine for a moment, what it would be like if that â€œexplosionâ€ had all neatly gone into a potty? Far less mess to clean up, I assure you.