In part 1, Rebekah from Thoughtful Momma talks about how few cons there are to Elimination Communication. Today she carries on refuting the negatives:

Let’s move on to the second â€œconâ€ that is often brought to my attention: The idea that it might be messy or perhaps just plain unsanitary. It absolutely amazes me how many people think EC is actually just parents allowing their kids to poop all over the place without doing anything about it (um, ew?).

They hear â€œundiaperingâ€ and they imagine life as always, except without a diaper. I have to admit, if that is actually how it worked, it would be pretty gross. Thankfully, it doesn’t work that way at all! I have to wonder how so many people would truly think it was a wholesome plan if it DID work that way? 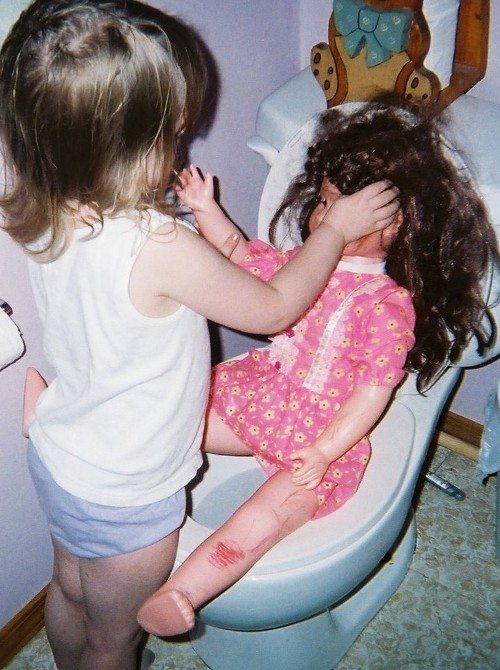 That said, there is a little fact about having babies and toddlers I think every parent should be aware of: there will be poop.

There will be poop in places you don’t want there to be poop and it is not charming. In my personal experience, I have not found this to be more true practicing EC than with any other method of potty learning. Most parents have at least one poop-story and most Western parents aren’t practicing EC.

Despite six continuous years of doing this, I only have three poop stories and one of them doesn’t even involve my own child (and she wasn’t EC’d, either, AND she was almost 3yo and yes, it was awful)! It is entirely likely that there will be poop at some point in the EC journey but not any more likely than you’d expect anyway. It is far more likely that if there is going to be a miss, it’s going to be pee. For one thing, whether you are ECing or not, impending poop is usually pretty obvious and easy to catch before it happens.

Secondly, kids pee way more frequently than they poop. When I first switched to EC I was shocked how often tiny babies need to go! But if you’re used to diapering, you aren’t really paying attention to how often they go and even the most diligent diaper changer isn’t going to be aware because wet is wet . It’s either a little wet or it’s VERY wet but there isn’t any reliable way of counting pees when you’re using a diaper.

So getting the hang of pee-needs generally means misses on the floor (or in your lap). There are ways around this, though! If you’re starting with an infant, make a habit of keeping something absorbent under them! I’ve seen people use everything from lamb-skin to folded up dish-towels or pre-folds. I put my son in regular old trainers these days. This keeps the floor dry and your lap dry, too.

When my youngest daughter was born (we started at birth) I just swaddled her with a prefold between her legs. I could easily see every time she went and just made the cue noise then and switched cloths. She was reliably releasing on cue within 2 wks of her birth. My oldest daughter had the cues down in 24hrs. Once the baby learns the cue noise and you become confident in offering â€œpottytunitiesâ€ miss frequency drops waaaay off and you’ll find â€œmessâ€ concerns to be nearly non-existent.

Many people choose to use full-time diaper backup, though, just in case. I am using this method with my son as I share a home with someone else. If you’re interested in naky-butt time for observation reasons but concerned about possible mess, just keep this thought in mind: The floor doesn’t care if it gets peed on. The floor is not going to try to wiggle away while you wipe it up, doesn’t mind having chemicals rubbed on it and best of all, it cannot possibly get a rash from having pee (or even poop) sit on its surface.

The important thing, in those instances, is that you just clean it up. It takes less time to wipe a little puddle up than it ever will to change a diaper. As far as it’s being unsanitary, the reality is that unless you are just going to leave it, it’s no more unsanitary than things that come in on the bottoms of your feet. Do you have a dog? A cat? Ever think about what Mr. Kitty is tracking all over
your floor every time he leaves the litter box? EC isn’t any more messy or unsanitary than diapering. 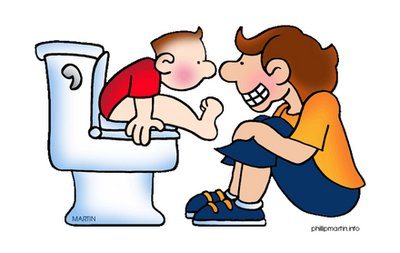 Once again we see that it’s just an entirely different approach.

Moving on to â€œconâ€ number three, the most common one I’ve heard in response to EC is that â€œIt’s just parent trainingâ€. It appears that many parents are concerned that the child isn’t learning anything from this method and that it is, in fact, the parent who is being trained. It seems as though the concern is that conventional methods will be needed after all, if EC is practiced.

While I understand the concern I have to say that this perspective certainly doesn’t give the child much credit. Let us consider the fact a baby’s ability to learn is astounding! When we compare the knowledge of a newly born baby to that of a yearling child, it’s really astonishing to think about all of the thousands of things that child has learned in just a year. As someone who’s watched EC work more than once with my own children, I can assure you that babies learn something from it.

I have never met a physically normal child that didn’t learn to walk, regardless of their parent’s methods for assisting their learning. I would say the same is true with potty independence. Children learn, like the rest of us, from observation and participation. It is, in fact, quite impossible to practice EC with a child for all that time and have them learn nothing about using a potty.

I feel that the pet analogy applies here, too. Nobody thinks anything of house-training a dog. It’s expected that dogs learn, quickly, not to mess in the house. I’m fairly certain, though, that if anyone ever suggested to one of us moms that our children possessed less intelligence than a dog, we’d be offended! The beautiful thing is that babies are far more intelligent than dogs (as we all know) and they are capable of reciprocal communication in a way that far outshines that of our canine friends.

In closing, I feel I’ve made a good case against the common perceived â€œconsâ€ of EC. In light of all the benefits of EC, I feel the only significant con is that it’s no longer common-place in Western Society.

I hope that I’ve managed to put the cons as we tend to see them into better light and maybe even inspired a few readers to try EC.