Today I welcome Sheila from A Gift Universe who has offered to share their experiences with Elimination Communication and how and why it did not work for them. Thanks Sheila! Of course, that means this is a post about poo, but don’t let that put you off!

EC was never my idea â€“ it was Marko’s from the start. I’d heard of the notion, but was never that into it. But when Marko was just shy of three months old, he let me know he felt differently.
We were on a trip to the other side of the country for a family reunion. We’d been away from home for three days, and the whole time he hadn’t pooped (normally he goes at least once a day). During the reunion itself, we slipped away from the noisy party for a quick diaper change. I laid Marko on my grandma’s bed and took off his diaper. At last â€“ a slight stain! Perhaps that poop would be coming soon.

As I focused on cleaning him up, he started peeing all over the place. Oops â€“ I hadn’t put anything down. I used a diaper to dry him off and reached in the bag for another diaper. Then he started pooping. A lot. During that diaper change, we went through three diapers and two outfits, and he apparently cleaned out his entire colon. It really was something to behold!

After that, I noticed he nearly always went during a diaper change. Some people start speeding up their diaper changes to avoid a mess, but I simply made sure to always change him on a waterproof mat and gave him plenty of time to decide.

That’s when I started researching elimination communication. I felt that since he already had one detectable pattern, it shouldn’t be hard to figure out the rest. Besides, it seemed he was trying to tell me â€œI don’t like going in my diaper, mama. I like it better when you’re here to clean me up right away!â€

The idea also appealed because I really enjoy communicating with my baby. I love having the confidence that I know what he needs. He had been going through some breast refusal for about two weeks (it’s been over a month now and we’re still struggling with it) and my one salvation has been watching him very carefully for hunger cues. If I can feed him the moment he realises he’s hungry â€“ or before â€“ he doesn’t get all worked up and is much easier to coax to the breast. I figured fine-tuning our communication would help with the breast refusal as well, because he’d have less frustration about not being understood. 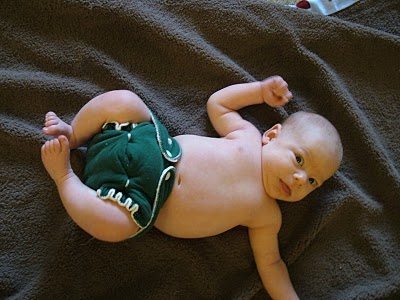 I picked a day and decided to put Marko in a cloth prefold with no cover, so that I could tell right away when he was wet. My intent was to make it just an observation day â€“ watching him to figure out any patterns or cues. But when we’d only been up for an hour that day, he just started to scream. Marko’s not a big crier, so I was at a loss to figure out what might be wrong. Finally I decided to take off his diaper, although it felt dry.

The second the diaper was off, he peed a LOT and then started smiling and laughing. I also noticed that he had a rash and what looked like a tiny abrasion in a very sensitive spot. It seemed like he knew it would hurt to go in his diaper, and wanted me to take it off! I was very proud and decided to leave the diaper off for the rest of the day. After all, it would give the rash a chance to heal.

The rest of the morning I kept him on a plastic-backed blanket and watched for cues. I couldn’t find a single one â€“ he just peed in the middle of whatever he was doing, every 10 to 30 minutes, without missing a beat. I was willing to keep with it, but our first hitch hit when he woke up from his second nap. I always feed him the moment he wakes up from a nap, before he’s fully awake, so he doesn’t have time to get all fussy about not wanting to nurse.

The trouble is, I also knew from watching him in the past that he always pees first thing as well. The first nap he did okay â€“ that is to say, he peed all over me while nursing. But when he woke up from that second nap, he was MAD. As far as I can understand, he was starving and he really wanted to nurse. But he also really had to pee and wanted to do that. He couldn’t focus on nursing because he was too upset about having to pee, and he couldn’t relax enough to pee because he was so hungry.

I carried my screaming son around the apartment for a long time, trying to cue him in various places, and even took him outside in the drizzle to calm him down. Finally I filled the sink with warm water and lowered him into it. He relaxed and peed a great deal. It took me another hour to calm him down enough to nurse, during which time he pooped on my arm, my clothes, and the carpet.

The rest of the day was harried. Each time he managed to catch a brief snooze, he woke up furious. If I tried to give up and put a diaper on him, he screamed and fought me. My boy just wasn’t happy. By the time his dad got home, I had gotten him into a diaper and resolved to keep it on. Our approach up to that point had worked fine, and I wasn’t going to mess with it.

The pee everywhere, the poop I scrubbed out of the carpet, the constant watching of my baby for the tiniest cue â€“ I feel these could all be overcome with a couple of days of practice. But I just didn’t want to put Marko through more stress while he was dealing with his nursing issues. What he communicated to me is that it’s just not the right time.

Someday we might go back to it and try again. In the meantime, I keep him in a diaper, he poops on the changing table, and we’re getting along just fine.

For more on this topic: