My little girl’s first birthday is coming up soon. I know many people don’t make much of a fuss for first birthdays, but for various reasons we are. Of course, every good party starts with an invitation so I thought I’d share with you what I’ve done.

Our theme is a zoo party, so using the template for a monkey from busybeekidscrafts.com as a base, I found two circular shapes that I could use for outlines (top and bottom of a candle holder). Fold the paper in such a way that you only have to cut each shape once, but get three large circles and two small. If you can, cut the circle in such a way that it’s still attached at a point. Draw and cut two small circles for ears, then draw and cut the faces. Take a pipe cleaner and cut that in to 5 parts â€“ two short arms, two longer legs and a long tail. Cut two strips that can be intertwined for the neck.

I find it useful easiest to write out the invitation on a third of the larger circles at this point. 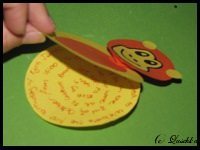 Paste a small circle in the middle of the large circle for the monkey’s belly.

Paste the face and ears on the head. 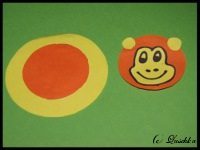 Glue the ‘arms’ and ‘legs’ to one of the large circles, then cover it with the circle that’s been written on. If you weren’t able to keep the circles together, dab a tiny bit of glue on the top of that circle, then glue the two circles to the ‘belly’ circle so that it lifts as a flap.

To make the neck, fold the two strips of paper alternative over each other (a two-strand plait). Then glue an end to the ‘tummy’ and an end to the ‘head’. 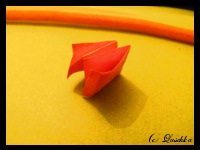 Bend the pipe-cleaner in to hands and feet, and twirl the ‘tail’ around your little finger and glue to the back. 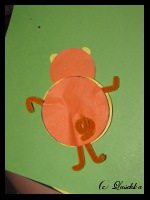 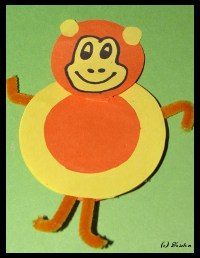 And there you go!

My daughter doesn’t ‘get’ that these are invitations though! She just likes playing with them till they tear! It’s a fun craft project and can easily just a monkey by not adding the third flap, but gluing the belly to the second circle.