Surfing through my Google reader tonight, a headline from last week’s New York Times caught my eye. It read: 4-Year-Old Can Be Sued, Judge Rules in Bike Case. Well, I don’t know where to start on this one.

The story in brief:

In April 2009, Juliet Breitman, 4, and Jacob Kohn, 5, were racing their bicycles, under the supervision of their mothers on the sidewalk of a building on East 52nd Street. They struck an 87-year-old woman named Claire Menagh, who was â€œseriously and severely injured,â€ suffering a hip fracture that required surgery. She died three months later of unrelated causes. Her estate sued the children and their mothers. A judge has now, two years later, ruled that the case can go ahead: the estate can sue the now six year old girl.

Reading the whole story and the comments, three things strike me.

According to New York law, children under 12 are allowed to cycle on the pavement, although pedestrians do have right of way. Sure. Tell that to an excited four year old in the middle of a race. Nonetheless, why were they on the pavement? Well, I’ve not been to New York, but from what I know of big cities, there aren’t that many other places for children to cycle. A big city, busy streets, small, possibly non existent yards. Where are children to play? Won’t a ruling like this just force parents to keep children indoors even more? As much as we may love the thought, we can’t all live out in the country, or in suburbs with great big driveways, round-the-house lawns or quiet streets. And no, going to the park is just not always practical.

And where were their mothers? Well, we just can’t really win, can we? We follow them around, keep them on leashes, or watch them like hawks and we’re disparagingly referred to as helicopter parents, reprimanded for parenting too much, but we leave them free to, oh, I don’t know, cycle on a pavement, and suddenly we’re negligent parents? Of course we need to teach them right from wrong, but surely, surely Juliet Breitman wasn’t the first four year old to ever crash into anyone? Nor was she the first four year old to do something she shouldn’t have. 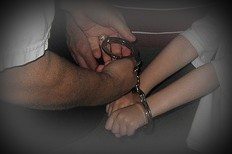 So can she be held responsible? This one is a no brainer to me. If child victims of rape, sexual abuse and physical abuse are generally considered to be too young to testify against their attackers in court, how exactly is a child able to be the accused in court? And if defendants have a right to confront their accusers, then this little girl should have a right to confront those trying to sue her. Well, that should be a fun day in court.

My graver concern is how this is impacting on the child’s childhood, what life lessons are to be taken from it and what precedent it sets for the future. If she’s aware of what’s going on, what a traumatic experience it must be for her. If she’s found guilty, does she go to juvenile detention? Does she have a record? How does it affect her view of herself? If she’s found guilty, but has some kind of suspended sentence, (I’m not a lawyer, so I don’t know what the potential likely outcomes are) what does that teach her about actions and consequences? And if she is found guilty and some sort of punishment is meted out, what does it mean for other four year olds? Can they stand trial for playground misdemeanours? For scratching someone accidentally on the slide? Pulling someone’s hair on the jungle-gym?

And how about the parents? Is the law not now another thing we won’t be able to protect our babies from? Because of a simple, silly and sad accident?

Unfortunate as the incident was, the elderly lady died of unrelated causes. Understandably her family were grieving, but tainting a child’s childhood like this is unforgivable in my view.Â  It is another nail in the coffin of the free range, free spirited child, and I think it’s just going that smidgen too far, don’t you?

Lactivism, Breast Feeding, Bottle Feeding, Formula And Mothers At War
Breastfeeding and Race: South Africa
Temporary Victory For Term Time Holidays (And Why This Really Matters!)
Pulling Down The Blinds For #BritMumsLive